By APO Group
A wide spectrum of stakeholders commemorating International Day of Peace in South Sudan’s capital, Juba, has dedicated the day to work together to infuse fresh momentum in the peace process with a resolute call for peace partners to stop conflict and promote human rights so that the trauma and scars of past civil wars can… 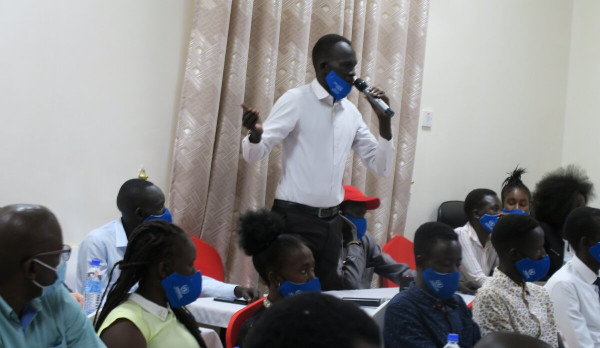 A wide spectrum of stakeholders commemorating International Day of Peace in South Sudan’s capital, Juba, has dedicated the day to work together to infuse fresh momentum in the peace process with a resolute call for peace partners to stop conflict and promote human rights so that the trauma and scars of past civil wars can be healed.

Commemorated on 21 September annually, this year’s Peace Day was especially significant for the world’s youngest nation as it slowly begins recovering from prolonged internecine strife and the COVID-19 pandemic.

In the spirit of recovery and reconciliation, The United Nations Mission in South Sudan (UNMISS) helped sponsor a panel discussion to mark the Day, drawing panelists from various universities across Juba, the South Sudan Peace Commission and the Ministry of Youth, Culture and Sports.

Speaking at the event, Sharon Lowery, a Human Rights Officer with the UN Peacekeeping mission stated that this year’s country-specific theme ‘Building Equitable and Sustainable Peace,’ is achievable only if all partners work seamlessly as a team to bring an end to human rights violations, recurrent ambushes on major trade routes and economic hardships, among other challenges.

“Killing and injuries, sexually-motivated violence and the ensuing stigma or discrimination, underage or forced marriages, recruitment of child soldiers and attacks on schools and places of worship, are some of the major human rights concerns that must stop,” stated Ms. Lowery.

Choul Ranbhang, Chairman, of the South Sudan Peace Commission, agreed. He also urged young people to avoid being grouped into factions along ethnic or regional lines as this often leads to conflict which could, otherwise, be avoided.

“I encourage young people to shun interethnic divisions; engage yourselves in peace initiatives so that whatever you speak about, sing about or debate upon will advance messages of reconciliation, peace and healing to everbody,” he said.

Ajonye Pepetua, Chair of the South Sudan Law Society highlighted that frustration abounds if abuses and violations are committed with impunity.

“If people fail to get the justice they duly deserve, the end result is anger, frustration, counter aggression and trauma, which can eventually breed many societal problems,” averred Ms. Pepetua.

Additionally, she warned young people against substance abuse. “When young people are stressed and traumatized by the events unfolding around them, they could, potentially be drawn towards consuming alcohol or other illicit substances. These also fuel aggression, so I advise all youth to refrain from such negative behaviours.”

Ms Pepetua added that everybody in South Sudan has been impacted by violence and war. “While you might not have faced the abuses or violations yourself, the fact remains that you are part of the social fabric in which they occur. This affects you equally and ensures you suffer from trauma as well.”

For Charles Abuni, Chairperson of Kpwo ni Kpwo, a local youth group which helps communities deal with trauma, collective efforts are needed to usher in a future of durable peace. “We need to combine our energies to respond proactively to reports of stigma, trauma and discrimination. If you see your friend or a family member behaving in a strange manner, don’t turn your back on them. Instead be the listening ear and the guiding hand they need,” he said eloquently.

According to Guy Bennett, Head of the UNMISS Political Affairs Division, 70 per cent of South Sudanese are under 30 years of age. This massive youth population are key agents of positive social transformation and need to be fully engaged and included in the ongoing peace process here.

“Intensifying grassroots peace initiatives, especially among young people is bound to help lessen intercommunal tensions and violence and promote social cohesion from the bottom up to the highest leadership stratum. If youth are engaged in building peace, they have the potential to become powerful drivers of much-needed change.”

Sport
Fully fit Barca can still win La Liga, says Koeman
15 mins ago
Ronald Koeman said on Saturday Barcelona will have a team to win La Liga once their injured players have recovered.
World
Myanmar junta chief excluded from ASEAN summit
34 mins ago
Myanmar's junta chief will be excluded from an upcoming ASEAN summit, the group said Saturday, a rare rebuke as concerns rise over the military government's commitment to defusing a bloody crisis.
Nigeria
FRSC vows to impound vehicles without number plates
1 hour ago
The Federal Road Safety Corps, Ondo State Command, vowed on Saturday in Akure that it would impound vehicles without number plates and those with illegal registration.
World
Security review after British MP stabbed to death in 'terror' attack
1 hour ago
The fatal stabbing of British lawmaker David Amess was a terrorist incident, police said Saturday, as MPs pressed for tougher security in the wake of the second killing of a UK politician...
Sport
Slapfight Nigeria commences training for athletes, officials
1 hour ago
Organisers of the epic Slapfight Nigeria on Saturday said that there is an ongoing training session for athletes and official that will be participating in the inaugural combat sport.

APO Press Releases
MEDIA INVITE: Update on ongoing Future of Women's Football consultation process
51 mins ago
Download logoFollowing the latest series of meetings, involving players, coaches and other key stakeholders from across the women’s game, media are invited to a virtual briefing on Monday, 18 October at 17:00 CET, to receive an update on the ongoing consultation process, as well as some of the current findings so far. Jill Ellis, two-time…

APO Press Releases
U.S. Embassy Chargé d'Affaires and USAID Country Representative participate in food distribution to commemorate World Food Day
51 mins ago
Celebration of the 42nd edition of World Food Day in Mandjou- Bertoua -East Region. On October 15, the Chargé d’Affaires a.i. of the Embassy of the United States, Mary Daschbach, and the Country Representative of the U.S. Agency for International (USAID), Paul Richardson, participated in a food distribution event for 1,083 refugees, organized by the World…
APO Press Releases
IMF Staff Completes Virtual Mission to Lesotho
51 mins ago
Download logoLesotho has been struggling with the fallout from the pandemic and a sharp decline in revenues from the Southern African Customs Union (SACU); The authorities and the mission team made significant progress in their discussions on policies that could be supported by the IMF under a financial arrangement. A team from the International Monetary…

APO Press Releases
Peace Corps Helps Launch Vaccination Campaign in Commune of Mantasoa
51 mins ago
With the support of the U.S. Peace Corps, the Mantasoa CSB II launched its COVID-19 vaccination campaign yesterday.  The campaign is providing free, Johnson&Johnson vaccines – a donation from the U.S. government – to approximately 4,000 community members in the 11 Fokontany of Mantasoa. “It’s great that we can provide vaccinations to the people of…
APO Press Releases
Minister of State Annen in North Africa
51 mins ago
Download logoMinister of State at the Federal Foreign Office Niels Annen will set off on a trip to North Africa today (16 October), with stops in Algeria, Tunisia and Libya. In Algeria, he will hold political consultations with government officials and will meet with representatives of civil society. His agenda also includes a visit to a…