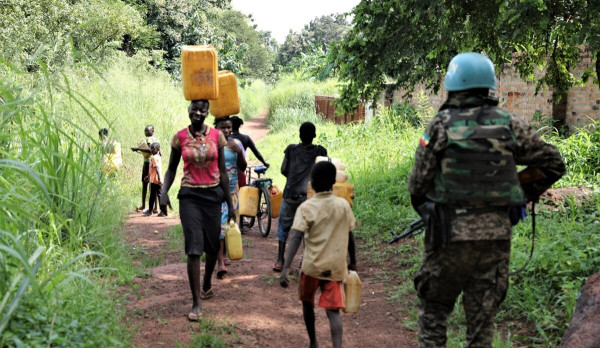 By escorting internally displaced persons who are walking long distances to fetch indispensable water for their households, UN peacekeepers have managed to greatly reduce incidents of violence against the women who typically carry out this heavy but essential task.

“Their presence around us is important as it helps us move around with confidence. We feared passing through the thick forest along the way, but with the peacekeepers following us we feel protected. As a result, water scarcity is no longer an issue,” says Margret Albert Mikisi.

She is one of more than 40,000 people who have been displaced by the ongoing conflict in Tambura in Western Equatoria State, and one of many displaced girls and women who spend several hours per day walking through tough bush vegetation to collect the precious liquid.

Marathon walks carrying water remain arduous, but at least it is no longer the dangerous chore it used to be, when females were frequently targeted by armed men.

“We (UNMISS) are protecting three sites where the internally displaced people are staying. We identified some needs that we are trying our best to address, with one of them being the risks involved in fetching water,” says Farai Nyamayaro, a UN Civil Affairs Officer based in Yambio.

In fact, the legwork of the patrolling peacekeepers has created a sense of steadfast protective presence, which is benefitting not only water carriers but local communities in general.

U.S. Embassy Launches Law Enforcement Partnership with the Kingdom of Lesotho
3 hours ago
U.S. Government Donates Equipment to the Regional Fund for Health Promotion in Littoral Region on the Occasion of the World Pharmacists Day
3 hours ago
Coronavirus: Africa CDC Encouraged by the Downward Trend of COVID-19 Cases in Africa
3 hours ago
UNESCO to Donate Broadcasting Equipment to Community Radio in Manicaland, Zimbabwe
3 hours ago
Africa CDC to Launch Eastern Regional Co-ordination Center
3 hours ago
Training of Teachers on Assistive Technologies and Interactive Digital Textbooks in Kenya, Uganda and Rwanda
3 hours ago
ECA and Partners Release Methodology Report on Electricity Market Regulatory Assessment in Africa
3 hours ago