U.S. Government Donates Equipment to the Regional Fund for Health Promotion in Littoral Region on the Occasion of the World Pharmacists Day
30 mins ago  APO Press Releases 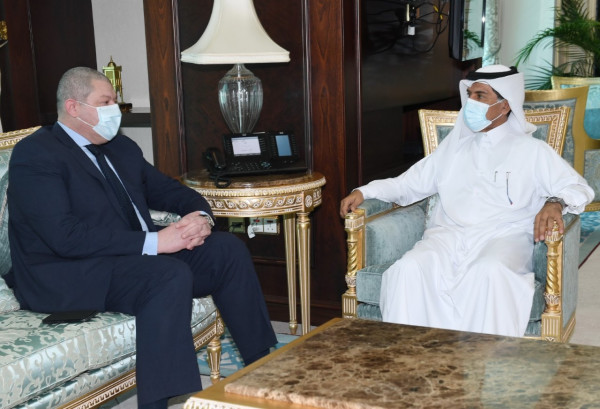 HE Secretary-General of the Ministry of Foreign Affairs Dr. Ahmad bin Hassan Al-Hamadi met on Monday with Charge D'Affaires at the embassy of the Arab Republic of Egypt to the State of Qatar Ahmed Samir Helmy Marzouk, on the occasion of the end of his tenure.

HE the Secretary-General of the Ministry of Foreign Affairs thanked the Charge D'Affairs for his efforts in supporting and strengthening bilateral relations, and wished him success in his new missions.

Distributed by APO Group on behalf of Ministry of Foreign Affairs of The State of Qatar.

U.S. Embassy Launches Law Enforcement Partnership with the Kingdom of Lesotho
30 mins ago
U.S. Government Donates Equipment to the Regional Fund for Health Promotion in Littoral Region on the Occasion of the World Pharmacists Day
30 mins ago
Coronavirus: Africa CDC Encouraged by the Downward Trend of COVID-19 Cases in Africa
30 mins ago
UNESCO to Donate Broadcasting Equipment to Community Radio in Manicaland, Zimbabwe
30 mins ago
Africa CDC to Launch Eastern Regional Co-ordination Center
30 mins ago
Training of Teachers on Assistive Technologies and Interactive Digital Textbooks in Kenya, Uganda and Rwanda
30 mins ago
ECA and Partners Release Methodology Report on Electricity Market Regulatory Assessment in Africa
31 mins ago