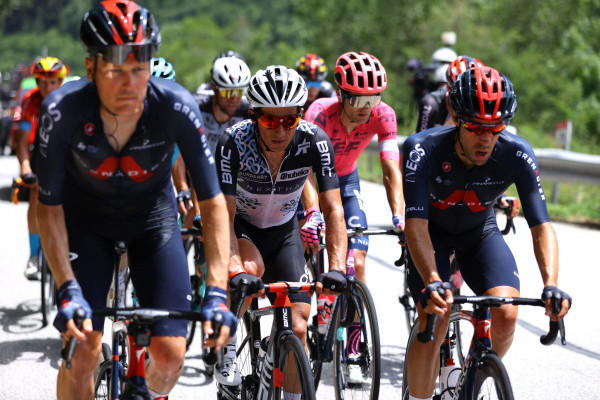 Sepp Kuss (Team Jumbo-Visma) won stage 15 of the Tour de France, being the strongest out of large breakaway to go solo to the line in Andorra la Vella.

Stage 15 of the Tour de France was another difficult climbing day as the peloton had to cover 191km, including 4 categorised climbs. A fast start on a small climb saw a big breakaway group go clear in the opening kilometers.

Sergio Henao was one of the first 8 riders to go clear before another 24 riders came across to the front group. Groupama-FDJ had numbers in the front group and so they took control of the pace and pushed the lead out to over 9’00”, ahead of the yellow jersey group.

The first real shake up in the race happened on the climb of Port d’Envalira, when the attacks started in the break but also back in the peloton, Ineos and Movistar upped the pace.

Henao came into difficulty on near the top of exposed climb as the strong winds also contributed to the group splitting. A select group made it over the top and descended to the base of the final climb, where Kuss then attacked early on and distanced his counterparts.

The American would not be seen again, and took a very good victory. Henao managed to hold of the chase from the yellow jersey group to finish 18th on the stage and retained his 18th position on the overall classification too.

I fought really hard to get into the break today, as we'd planned, and we managed to get a small group together at the start which was perfect. We then had the bigger group come across to us and I rode very comfortably.

There was a very special moment for me with my family waiting for me on the final climb, and I gave it my all so I'm proud of my fighting performance.

We'll take stock again on the rest day, recover well and then look ahead to an exciting final week heading towards Paris. There's still a lot of racing to be done in this race.