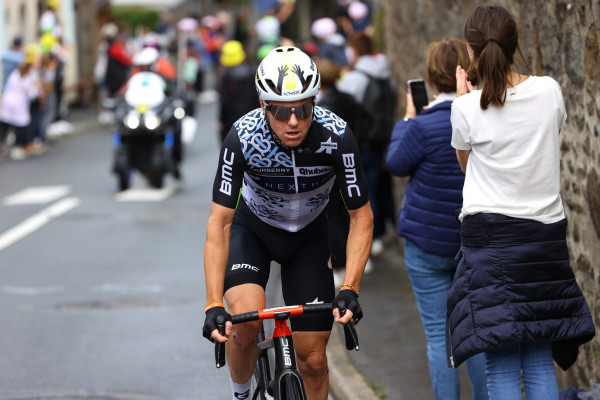 Team Qhubeka NextHash started stage 2 of the Tour de France with the goal of making the break of the day. It was a goal that was achieved by road captain Simon Clarke going clear of the peloton with 3 other riders in the opening 15km of the 183km stage. Two other riders would eventually ride across to Clarke’s group to make it 6 out front for the majority of the day.

With the King of the Mountains jersey up for grabs in the breakaway, the escapees would attack one another on each of the categorized climbs. Heading to the Cote de San-Brieuic some light rain was falling, and Clarke was following a counter attack of two riders when he unfortunately slid out and hit the deck.

With the peloton already close behind at this stage, our road captain returned to the main group as the two riders pressed on up ahead. Their gap was always kept in check though, as once again the pre-race favourites looked to take advantage of the tough finishing circuit that included two ascents of the Mur de Bretagne.

With a fast pace being set, the break was caught before the first climb up to the line. A few riders would drop on the positive gradient but Team Qhubeka NextHash had both Michael Gogl and Sergio Henao fighting for position among the best.

Van der Poel made an initial attack on the Mur de Bretagne but was unable to go clear the first time. However, on the 2nd and final ascent the Dutchman had enough left in the tank to go again and made his move with 700m to go stick, all the way to the line.

Henao rode strongly to finish with the main GC group, which was reduced to just 27 riders and crossed the line 8 seconds behind Van der Poel. Our remaining seven Team Qhubeka NextHash riders all finished safely.

It was a very hard day, it’s the Tour, and every day is incredibly difficult. The finale was very tough too but I had good legs and was in the first group.

Victor, Max and Michael were all working for me to help position me and it might have been possible to finish slightly higher up but overall I was very happy with the legs that I had today.

Mathieu van der Poel was amazing, a super attack along with Pogacar. They showed just how strong they are and all the riders that were in my group were right on the limit because of the effort they put in.