By APO Group
The latest round of public consultations on Somalia’s constitutional review process came to an end this week, with members of the public providing more of their views on what should go into the final document to safeguard their rights on a range of issues. “We need special treatment for persons with disabilities, and the most important issue… 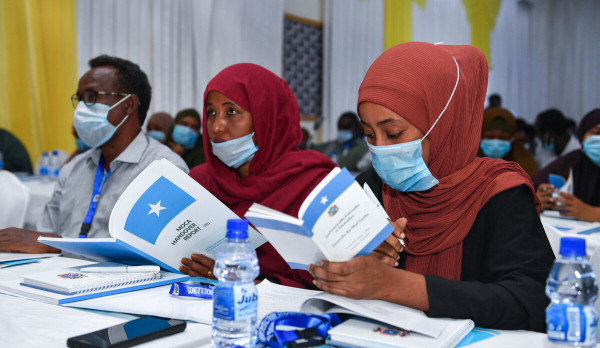 The latest round of public consultations on Somalia’s constitutional review process came to an end this week, with members of the public providing more of their views on what should go into the final document to safeguard their rights on a range of issues.

“We need special treatment for persons with disabilities, and the most important issue is education. Education will help to develop everyone’s lives. The visually impaired and physically disabled people need special institutions to address the challenges they face. These should be included in the constitution,” said Ali Sheikh Rashid.

The 73-year-old, visually-impaired father-of-six added that he hopes the constitution, once finalized, will guarantee the rights of all Somalis and particularly ensure equal access to opportunities for persons with disabilities.

Mr. Rashid was among 50 people who attended a three-day public outreach session on the constitutional review process in Jowhar, the administrative capital of Hirshabelle.

In addition to Hirshabelle, similar consultations were held in two other Federal Member States, Galmudug and South West State. They were carried out by Somalia’s federal Ministry of Constitutional Affairs (MoCA) as part of its efforts to gather views from stakeholders on the new constitution.

The consultations, supported by the United Nations Assistance Mission in Somalia (UNSOM), is part of MoCA’s ongoing outreach efforts to garner the views of a wide range of Somalis around the country to feed into the review process currently underway. Since 2012, Somalia has had a Provisional Constitution.

In addition to gathering the views of the public, MoCA officials also presented progress made so far, challenges encountered and the way forward.

“The public participation and response have been overwhelming, and participants were asking us to extend the public engagement meetings to district and village levels. From our assessment, more than seventy per cent of the public today have a better understanding of the constitution compared to four years ago,” said MoCA’s Director of Public Outreach, Abdikani Ali Adan.

“We have gathered views, answered questions, and shared the information we have been collecting for the last four years,” he added. “We hope this constitution will be fruitful for the people and the country.”

The topics covered in the three consultation sessions covered the whole gamut of issues and concerns affecting Somali society. As well as the rights of persons with disabilities, other topics included justice, security, fair and equal representation, power-sharing, the rights of women and youth, resource-sharing and the status of Mogadishu.

A youth representative at the Dhusamareb consultations in Galmudug, Bashir Mohammed Salat, said it was vital to ensure youth’s views were included in the review process, especially in light of the fact that they account for such a large percentage of the Somali population.

“To guarantee the rights of youth, we want a provision in the Constitution stipulating the age bracket of youth and when they are allowed to seek leadership positions. Currently, there is a requirement that a person should not be below 30 years to hold a leadership position – we want the age lowered to 20 years to give a chance to young aspiring leaders,” said Mr. Salat.

The role of women and ensuring their rights also figured prominently – both in taking part in the review process and within the final document.

“To address inequalities, women need to participate in the constitutional review process and political campaigns, and express their views and recommendations to achieve the 30 per cent quota [for women’s representation in parliament]. We can achieve this if women campaign for education and political participation. The constitutional review focuses on our self-determination as a nation and the development of women,” said Hawo Omar Abdirahman, a civil society representative in Baidoa.

World
Myanmar junta chief excluded from ASEAN summit
17 mins ago
Myanmar's junta chief will be excluded from an upcoming ASEAN summit, the group said Saturday, a rare rebuke as concerns rise over the military government's commitment to defusing a bloody crisis.
Nigeria
FRSC vows to impound vehicles without number plates
51 mins ago
The Federal Road Safety Corps, Ondo State Command, vowed on Saturday in Akure that it would impound vehicles without number plates and those with illegal registration.
World
Security review after British MP stabbed to death in 'terror' attack
1 hour ago
The fatal stabbing of British lawmaker David Amess was a terrorist incident, police said Saturday, as MPs pressed for tougher security in the wake of the second killing of a UK politician...
Sport
Slapfight Nigeria commences training for athletes, officials
1 hour ago
Organisers of the epic Slapfight Nigeria on Saturday said that there is an ongoing training session for athletes and official that will be participating in the inaugural combat sport.
World
France pays tribute to teacher beheaded over Mohammed cartoons
1 hour ago
France  paid tribute to schoolteacher Samuel Paty on Saturday, one year after he was beheaded by an extremist after showing his class cartoons of the Muslim Prophet Mohammed. Paty, 47, was stabbed and then decapitated after leaving the middle school where he taught history and geography in the tranquil Paris suburb of Conflans-Sainte-Honorine on the…

APO Press Releases
MEDIA INVITE: Update on ongoing Future of Women's Football consultation process
34 mins ago
Download logoFollowing the latest series of meetings, involving players, coaches and other key stakeholders from across the women’s game, media are invited to a virtual briefing on Monday, 18 October at 17:00 CET, to receive an update on the ongoing consultation process, as well as some of the current findings so far. Jill Ellis, two-time…

APO Press Releases
U.S. Embassy Chargé d'Affaires and USAID Country Representative participate in food distribution to commemorate World Food Day
34 mins ago
Celebration of the 42nd edition of World Food Day in Mandjou- Bertoua -East Region. On October 15, the Chargé d’Affaires a.i. of the Embassy of the United States, Mary Daschbach, and the Country Representative of the U.S. Agency for International (USAID), Paul Richardson, participated in a food distribution event for 1,083 refugees, organized by the World…
APO Press Releases
IMF Staff Completes Virtual Mission to Lesotho
34 mins ago
Download logoLesotho has been struggling with the fallout from the pandemic and a sharp decline in revenues from the Southern African Customs Union (SACU); The authorities and the mission team made significant progress in their discussions on policies that could be supported by the IMF under a financial arrangement. A team from the International Monetary…

APO Press Releases
Peace Corps Helps Launch Vaccination Campaign in Commune of Mantasoa
34 mins ago
With the support of the U.S. Peace Corps, the Mantasoa CSB II launched its COVID-19 vaccination campaign yesterday.  The campaign is providing free, Johnson&Johnson vaccines – a donation from the U.S. government – to approximately 4,000 community members in the 11 Fokontany of Mantasoa. “It’s great that we can provide vaccinations to the people of…
APO Press Releases
Minister of State Annen in North Africa
34 mins ago
Download logoMinister of State at the Federal Foreign Office Niels Annen will set off on a trip to North Africa today (16 October), with stops in Algeria, Tunisia and Libya. In Algeria, he will hold political consultations with government officials and will meet with representatives of civil society. His agenda also includes a visit to a…