By APO Group
Share on Facebook Share on Twitter Share on WhatsApp Share on Telegram
Historically plagued by recurrent conflict and natural disasters such as extreme flooding, residents of Bor in Jonglei state, South Sudan, now have a reason to be joyous. South Korean peacekeepers deployed to the United Nations Mission in South Sudan (UNMISS) recently handed over an ambulance, first aid kits, motorcycles and an assortment of health supplies… 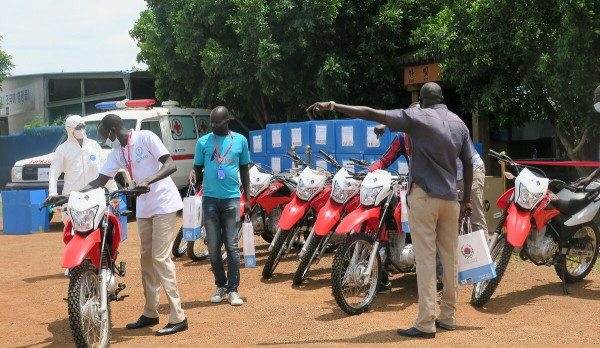 Historically plagued by recurrent conflict and natural disasters such as extreme flooding, residents of Bor in Jonglei state, South Sudan, now have a reason to be joyous.

“For the past three decades, the Republic of Korea has unstintingly contributed to the United Nations, in terms of both humanitarian as well as peacekeeping interventions,” said Franklyn Massaquoi from the mission’s Political Affairs Division at the handover ceremony.

“This generous gesture will go a long way in ensuring benefits for the people of Bor and supplement the Government’s efforts to provide services to local communities,” he added.

Intercommunal conflict and criminality are pervasive in Bor with national police being overburdened with law and order issues. Poor road conditions also reduce their response time when they receive reports of incidents that require police intervention. The motorcycles given by South Korean troops have been handed over to the local police here and are expected to go a long way in improving the law and order situation for community members by making police officers more mobile as they discharge their duties.

In addition to this handover which amounts to USD 276,000, engineers from South Korea working with the UN Peacekeeping mission here have an additional USD 863,000 budget that they intend to contribute towards improving the lives of people living here.

“It is our hope that the people of Bor, Pibor and Akobo will get much-needed succor and confidence through our efforts to improve their daily lives,” stated Colonel San Roh, Commander of the South Korean contingent.

Nigeria
COVID-19: NCDC reports 165 new infections in Nigeria, total 210,460
40 mins ago
The Nigeria Centre for Disease Control (NCDC) has reported 165 new infections and 26 additional deaths from the coronavirus pandemic on Sunday.
World
Colombia prepares to extradite drug lord 'Otoniel' to US
51 mins ago
Colombia's government announced Sunday it is working towards extraditing the country's most-wanted drug trafficker "Otoniel" to the United States, a day after he was captured in a major operation in the jungle.
World
3 dead, 3 missing after avalanche on Ecuador volcano
1 hour ago
An avalanche Sunday on a snow-capped Ecuadoran volcano, the highest peak in the country, killed at least three climbers and left three others missing, officials reported. The avalanche struck a group of 16 mountaineers while at an altitude of 6,100 meters (20,000 feet) on the dormant Chimborazo volcano, according to responders. "There are three missing…
Nigeria
NUC picks 6 varsities for standards enhancement programme
1 hour ago
The National Universities Commission (NUC) has picked six federal universities for the Sustainable Procurement, Environmental and Social Standards Enhancement (SPESSE) Project.
World
Turkey lira slumps to record low after Erdogan orders expulsions
1 hour ago
The Turkish lira dropped to record lows on Monday after Turkish President Recep Tayyip Erdogan at the weekend ordered the expulsion of the ambassadors of 10 countries, including Germany and the United States.