By APO Group
Heavy rains have caused widespread flooding in South Sudan this year, affecting more than 400,000 people so far, according to United Nations estimates, while the rainy season continues. Many of the hardest hit communities are in Jonglei State, where wetlands and tributaries of the White Nile overflowed as seasonal rains arrived earlier than usual. In the villages… 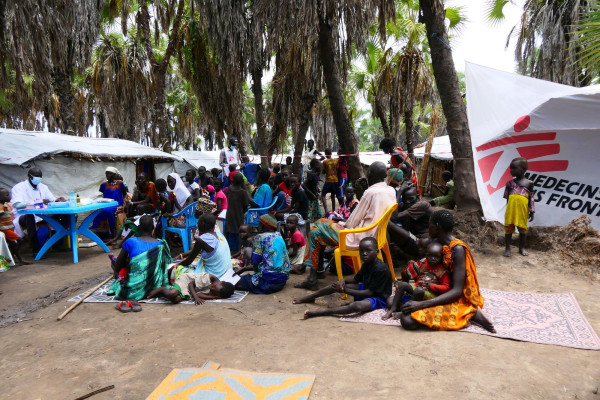 Heavy rains have caused widespread flooding in South Sudan this year, affecting more than 400,000 people so far, according to United Nations estimates, while the rainy season continues.

Many of the hardest hit communities are in Jonglei State, where wetlands and tributaries of the White Nile overflowed as seasonal rains arrived earlier than usual. In the villages of Haat and Pakur, in western Ayod County, floods forced approximately 6,000 people to flee their homes from May onward.

On August 8, the floodwaters destroyed a small MSF clinic and many homes in Haat. MSF evacuated its staff to Old Fangak, four hours away by motorboat, before returning to the area and conducting mobile clinics.

“In the region around Haat, we saw catastrophic flooding,” says Emilie Allaire, the leader of MSF's medical team in Old Fangak. “The center of the community was flooded several feet deep, forcing all the local population onto the last pieces of land that were not flooded.”

Everything in the affected communities was destroyed, Allaire says. People are staying in huts they made of sticks and sometimes plastic sheeting. There are no latrines and no clean drinking water.

“We went island to island to provide general medical consultations for children and adults,” Allaire says.

The mobile clinic team carried out 474 medical consultations from August 29 to September 1, and 651 medical consultations from September 17 to 21. The medical needs are extremely high when compared to the weeks before the flooding. The most common conditions include non-bloody diarrhea, upper respiratory tract infections, urinary tract infections, malaria and malnutrition. Canoes are the main means of transportation during the flooding, but it would take several days to reach a medical facility this way.

The team diagnosed Nyadak Kulang with severe malaria, and she was about seven months pregnant, requiring more specialized care. They then brought her to the hospital where MSF works in Old Fangak, four hours away by speedboat, and her condition started to improve with treatment.

“We didn't have clean water,” she says. “People around me on the island were sick. They were suffering, and the symptoms we saw were diarrhea and vomiting.”

Food scarcity is also a widespread concern. Most local people are subsistence farmers, but the recurring flooding has made agriculture impossible. Cattle either drowned or are dying of hunger because the grass they feed on is covered by water. People report surviving on fish and water lilies.

MSF is continuing mobile clinics for children under five years old and pregnant women and administering vaccinations for measles, tetanus and diphtheria. Moderately and severely malnourished children are treated with therapeutic food, and children and adults are given emergency food rations due to general food insecurity.

However, MSF staff warn that the health of the displaced population is likely to deteriorate further without adequate assistance, as the flooding continues.

“The medical service, though we are providing it, is not enough,” says Paul Gany Hoth, MSF clinical outreach officer. “They are in the rain in an open space. They need shelters, they need food, they need everything.”

Nigeria
Gunmen kill 43 in Nigeria's troubled north
55 mins ago
Gunmen from a suspected criminal gang attacked a village market in northwest Nigeria's Sokoto state, killing 43 people, the state government said Monday. Heavily armed gangs known locally as bandits have terrorised northwest and central Nigeria for years, raiding and looting villages, but attacks have become even more violent in recent months. "Forty-three people have…
Nigeria
Japanese government earmarks $260,000 to combat piracy, kidnapping in Nigeria, others
1 hour ago
The Japanese government has earmarked 260,000 dollars in its bid towards combating piracy and kidnapping in the Gulf of Guinea (GoG).
World
Belgian police break up cocaine network, arrest 2
2 hours ago
Belgian officials announced Monday they had broken up a cocaine smuggling gang, arresting 27 people in a series of raids during which they seized drugs, guns and luxury goods -- including horses.
Sport
Biennial WC to stop super clubs hogging money, says FIFA's Infantino
2 hours ago
FIFA president Gianni Infantino said on Monday his controversial plans to hold a World Cup every two years will help spread the fund's football generates away from a handful of super clubs.
Sport
Man pleads guilty to charge relating to footballer Sala's death
2 hours ago
A 66-year-old man has pleaded guilty to a charge in relation to the death of Argentine footballer Emiliano Sala in a light aircraft crash in 2019, a British court heard on Monday.

APO Press Releases
Statement attributable to the Spokesperson for the Secretary-General - on the situation in the Kingdom of Eswatini
3 hours ago
Download logoThe Secretary-General is following with concern the ongoing developments in Eswatini, including the recent deployment of armed security forces at various schools, reports of excessive use of force in response to student demonstrations, and the indefinite closure of schools. This affects adversely children and young people. The Secretary-General reiterates the importance of enabling the…

APO Press Releases
Civil society in Eastern Equatoria trained by UNMISS on documenting human rights violations
3 hours ago
“There has been great pressure on the civilian population in Eastern Equatoria to stop human rights violations during conflicts and intercommunal violence,” said Anthony Nwapa, a Human Rights officer working with the UN peacekeeping mission. “We want to start addressing these challenges with you as a team.” Mr. Nwapa was speaking at a two-day sensitization…
APO Press Releases
Renewed Call to Protect Girls' Rights and End Child Marriage in East and Southern Africa
3 hours ago
Download logoWhen girls are forced to drop out of school because they get married, often well before their 18th birthday and seldom as a choice, it perpetuates a lifetime of poverty and the denial of girls’ rights and ability to fulfil their potential. Under the joint UNFPA-UNICEF Global Programme to End Child Marriage (GPECM), experts…
APO Press Releases
Technical Advisory Group to focus on growth and advancement of women's football
3 hours ago
Download logoCompetitive balance, increased opportunities for underserved nations, a FIFA Women’s Club World Cup, increased visibility and participation, FIFA (www.FIFA.com) international windows, prize money and the possibility of staging a biennial FIFA Women’s World Cup are some of topics included in the discussions held by the FIFA Technical Advisory Group (TAG) led by Jill Ellis.…
APO Press Releases
Football champion Didier Drogba appointed World Health Organization Ambassador for Sports and Health
3 hours ago
Download logoFootball legend Didier Drogba was today announced as the World Health Organization's Goodwill Ambassador for Sport and Health. Drogba, from Côte d’Ivoire, will support WHO to promote the Organization’s guidance on the benefits of physical activity and other healthy lifestyles, and highlight the value of sports, particularly for youth. Mr Drogba, well known for…

APO Press Releases
More COVID-19 vaccines arrive in Ghana
3 hours ago
Ghana’s robust COVID-19 vaccination campaign continues to receive a boost with donations through the COVAX Facility. The Ministry of Health has in the past few weeks, taken delivery of more than 2 million doses of AstraZeneca’s Covishield vaccines from the Governments of Germany, Denmark, Iceland, Norway with Germany contributing the largest single consignment of over…