By APO Group
At a makeshift health clinic set up alongside a road in Ag Geneina, a town in West Darfur, Sudan, several young girls sketch flowers, while the young boys in the group draw weapons and make mud moulds of military vehicles.  “I have been encouraging them to make drawings from happier memories before the conflict that… 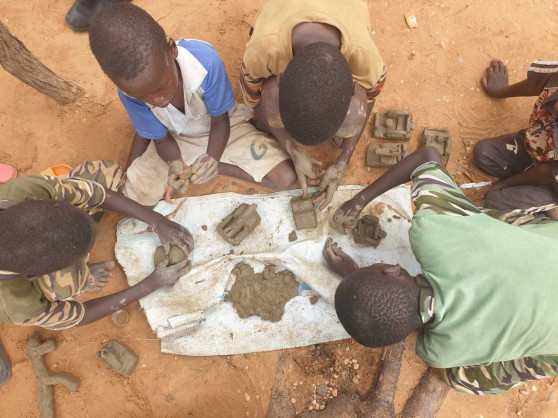 At a makeshift health clinic set up alongside a road in Ag Geneina, a town in West Darfur, Sudan, several young girls sketch flowers, while the young boys in the group draw weapons and make mud moulds of military vehicles.

“I have been encouraging them to make drawings from happier memories before the conflict that led to their displacement,” says Hajir Ahmed Hassan, a psychologist who works in one of the child-friendly clinics in the area managed by the non-governmental organization (NGO) World Relief through a grant from the OCHA-managed Sudan Humanitarian Fund. “The boys associate soldiers with power, having experienced conflict first-hand,” she explains.

The drawing activities serve as therapy to help the children overcome psychological trauma as a result of the conflict in West Darfur.

Every morning, Hajir spends two hours with more than 30 children in makeshift structures or under the shade of large trees to address psychosocial issues arising from their displacement and current circumstances. She also engages with the children in recreational activities as part of therapy services.

When conflict broke out in West Darfur in January 2021, the Sudan Humanitarian Fund released US$300,0000 through its Emergency Rapid Response Mechanism within a week, and an additional $599,000 from its Reserve for Emergencies within three weeks, to respond to rising humanitarian needs.

The Fund has provided a total of $1.3 million for response activities in West Darfur to World Relief and Save the Children, while the UN Central Emergency Response Fund (CERF) provided an additional $5 million in January of this year to various partners.

With its share of the funds, World Relief has provided health, nutrition and psychosocial support through two fixed health facilities and nine temporary health clinics over the past eight months. Among the services provided include trucking clean water to 18 gathering sites for internally displaced people; installing water tanks; and distributing jerry cans to vulnerable households.

The Sudan Humanitarian Fund is a country-based pooled fund managed by OCHA Sudan under the leadership of the Humanitarian Coordinator. It collects donor contributions to make funding directly available to humanitarian partners working on the ground so they can deliver timely and effective life-saving assistance and protection to the most vulnerable people in need.

Distributed by APO Group on behalf of Office for Coordination of Humanitarian Affairs (OCHA).

Nigeria
FRSC vows to impound vehicles without number plates
24 mins ago
The Federal Road Safety Corps, Ondo State Command, vowed on Saturday in Akure that it would impound vehicles without number plates and those with illegal registration.
World
Security review after British MP stabbed to death in 'terror' attack
40 mins ago
The fatal stabbing of British lawmaker David Amess was a terrorist incident, police said Saturday, as MPs pressed for tougher security in the wake of the second killing of a UK politician...
Sport
Slapfight Nigeria commences training for athletes, officials
1 hour ago
Organisers of the epic Slapfight Nigeria on Saturday said that there is an ongoing training session for athletes and official that will be participating in the inaugural combat sport.
World
France pays tribute to teacher beheaded over Mohammed cartoons
1 hour ago
France  paid tribute to schoolteacher Samuel Paty on Saturday, one year after he was beheaded by an extremist after showing his class cartoons of the Muslim Prophet Mohammed. Paty, 47, was stabbed and then decapitated after leaving the middle school where he taught history and geography in the tranquil Paris suburb of Conflans-Sainte-Honorine on the…
World
Bali earthquake kills three, injures seven
1 hour ago
Three people were killed Saturday when an earthquake struck the Indonesian tourist island Bali, the disaster agency said.

APO Press Releases
Top 50 Women in Corporate Africa Revealed after Data-Driven Research
12 hours ago
In a major virtual summit with over 1,000 high level attendees, Africa.com revealed the names of the 50 most senior women in Corporate Africa. The Africa.com Definitive List of Women CEOs is distinguished in that it is data-driven. The researchers started by working with data provided by Bloomberg, and evaluating the over 1,400 companies listed…
APO Press Releases
UNMISS, Ministry of Gender, Child and Social Welfare hold workshop in Juba on providing services to communities
12 hours ago
Download logoThe United Nations Mission in South Sudan (UNMISS) recently partnered with the State Ministry of Gender, Child and Social Welfare, in Central Equatoria, to host a day-long, consultative workshop for development partners who work on delivering services to citizens of the state. The forum’s main aim: To give stakeholders insight into the strategic planning…
APO Press Releases
Unlocking the potential of Africa's free trade area for rural women
12 hours ago
Download logoThe Food and Agriculture Organization of the United Nations (FAO) Regional Office for Africa has launched a new brief that advocates for seizing the opportunities of the African Continental Free Trade Area (AfCFTA) for the economic empowerment of women in agriculture. The publication is launched today to coincide with the International Day for Rural…