By APO Group
Share on Facebook Share on Twitter Share on WhatsApp Share on Telegram
At African Energy Week 2021, which is taking place this week in Cape Town, South Africa, the country spotlight session for the Republic of the Congo titled ‘The Role of the Congolese Hydrocarbons Sector and the Development of a Competitive African Hydrocarbons Market in the Carbon-Neutral Age’ gathered key participants, including H.E Bruno Jean-Richard Itoua,… 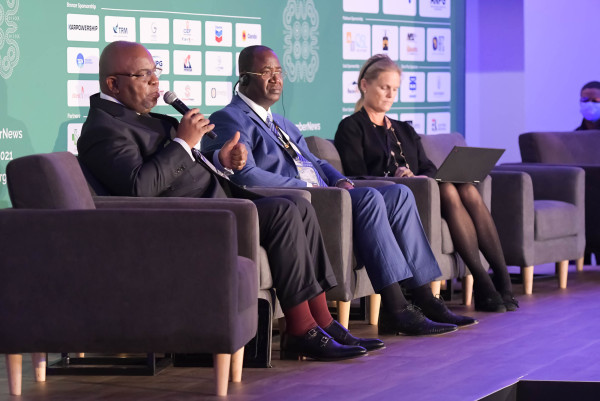 At African Energy Week 2021, which is taking place this week in Cape Town, South Africa, the country spotlight session for the Republic of the Congo titled ‘The Role of the Congolese Hydrocarbons Sector and the Development of a Competitive African Hydrocarbons Market in the Carbon-Neutral Age’ gathered key participants, including H.E Bruno Jean-Richard Itoua, Minister of Hydrocarbons of the Republic of the Congo; Karl Rogatien NGAKALA, Director of Oil Downstream Activities, SNPC; and Ingvil Smines Tybring-Gjedde, Former Minister of Public Security (and cyber security) in the Ministry of Justice and Public Security of Norway, and CEO of Earth, Wind & Power.

The participants engaged in critical discussions on the Congo’s energy industry and shared thought-provoking insights with the public on the constitutive elements of policies and initiatives that make the Congo a preferred destination for long-term investments.

“The only issue we experienced in the beginning was to get back most of the revenue we could from the industry. Things have changed for the country in a drastic way with oil becoming the first and biggest revenue generator for the country. In the beginning, it was mainly on a concessional basis, this represented the first relationship between the country and companies. After changing the rules and laws, we established the production sharing agreement, leading to us getting more revenues in the country,” stated H.E. Jean-Richard Itoua.

“We align with the Congo in many ways. We are both 5 million inhabitants and are very dependent on the oil and gas industry. Now that gas is really high due to the current situation of higher demand. I do think that countries such as Congo should make use of all the resources they have in the country, do it sustainably. The resources of the country belong to the country itself. We need to look at value creation with gas. It should be kept in the country where you use power because then you will have more jobs, more opportunities for exports,” stated Tybring-Giedde.

The SNPC, the country’s national oil company, has largely been responsible for spearheading efforts to overhaul the country’s energy sector by delineating strategies aimed at tackling identified organizational and performance inadequacies, establishing

regulatory frameworks to develop its human capital, CSR, and QHSE, and investing heavily in infrastructure projects aimed at enhancing the company’s exploration and production capabilities. Through its subsidiary SONAREP (Société Nationale de Recherche et de Production), the SNPC aims to increase the Congo’s yearly output, conducting exploration activities and drilling five appraisal wells last year, which are currently going through a testing phase, and is in collaboration with the Ministry of Hydrocarbons to find new partners for a joint venture to start operations on a “dormant” field.

If the Republic of the Congo has gained significant attention in the last few years for the proactive measures put in place to boost its energy industry and its major oil discoveries, the country is set to attract more of it in the coming years. Indeed, the Congo is expected to unveil the country’s first Gas Master Plan (GMP) done in collaboration with UK-based company, Wood Mackenzie, in a bid to monetize the land’s great gas reserves estimated at 284 billion cubic feet. If properly implemented, the Congo is poised to become a dominant regional gas producer and exporter, thus obtaining energy independence and security while boosting the country’s GDP and fostering rapid and sustained socioeconomic growth.

“We are working on a new gas plan while we work to change the rules and laws in the industry. We need gas for industry and also have the potential to develop an LNG industry. We need to bring more companies on board who are committed to gas. We need to work on the legal and fiscal roots to make it more attractive and then we will have all the conditions to be a gas player in Africa,” continued H.E. Jean-Richard Itoua.

AMA Press Releases
The Kerry Group’s acquisition of East Africa’s Afribon set to bring heathy and tasty food to consumers
11 mins ago
NAIROBI, Kenya, 6 December 2021- /African Media Agency (AMA) /- The Kerry Group has expanded its footprint in Africa following its acquisition of Rwanda-based Afribon. This transaction further enhances Kerry’s focus as a leading business to business ingredient solutions provider for the food, beverage and pharmaceutical markets.  Launched in 2012, Afribon is specialised in the…
Nigeria
Buhari urges auditors-general to stamp out corruption
12 mins ago
President Muhammadu Buhari has called on Auditors-General across the country to introduce strategies that will help stamp out corruption from the system.
Nigeria
Police arrest 5 rape suspects, woman with 90 rounds of ammunition in Borno
41 mins ago
The Borno Police Command on Monday said it arrested five suspected rapists and a woman in possession of 90 rounds of ammunition.
Travel and Places
Travelling This Holiday? Here Are Some Packing Tips For You!
1 hour ago
The holiday season is closer than ever, and people are getting ready to take some time off to cool off. All work and no play makes a dull and worn out you! If travelling is part of your cooling off for Detty December, preparing and packing for your trip is a delicate aspect to pay…
Nigeria
Bauchi Assembly withdraws confirmation of commissioner over budget defence
2 hours ago
Bauchi State House of Assembly during its Monday plenary withdrew its earlier confirmation of the Commissioner of Education, Dr. Aliyu Tilde, over alleged disrespect of the lawmakers during the budget defence. The lawmakers had on December 3 ordered the Commissioner out of the defence hearing for keeping them waiting for one hour after the scheduled…

AMA Press Releases
The Kerry Group’s acquisition of East Africa’s Afribon set to bring heathy and tasty food to consumers
11 mins ago
NAIROBI, Kenya, 6 December 2021- /African Media Agency (AMA) /- The Kerry Group has expanded its footprint in Africa following its acquisition of Rwanda-based Afribon. This transaction further enhances Kerry’s focus as a leading business to business ingredient solutions provider for the food, beverage and pharmaceutical markets.  Launched in 2012, Afribon is specialised in the…
APO Press Releases
Living in shadows: Disabled women speak at their first-ever focus group in Warrap
12 mins ago
Download logo“I often feel invisible,” revealed Angelina Ayer Akol, a disabled woman from Warrap during a focus group discussion. "When our community distributes material assistance, disabled people are always excluded. During past floods, I was displaced, sleeping on plastic sheets and constantly relocating but no one helped me. I was completely excluded, as if I didn’t…
APO Press Releases
Special Representative of President Xi Jinping of China Pays Courtesy Call on Sierra Leone's President Julius Maada Bio, Advances Cooperation
12 mins ago
Download logoSpecial Representative of President Xi Jinping of the People’s Republic of China, His Excellency Yang Jiechi, has led a high-level delegation to meet His Excellency President Dr Julius Maada Bio, advance cooperation and convey goodwill from Beijing. H.E. Yang, who is the Director of the Central Foreign Affairs Commission, also extended warm regards from…
APO Press Releases
First Lady Margaret Kenyatta Advocates For Alternative Rites Of Passage To Replace FGM
12 mins ago
Download logoFirst Lady Margaret Kenyatta has lobbied stakeholders and communities to support the adoption of alternative rites of passage that involves mentorship to replace female genital mutilation (FGM). “The proposal to take girls through a 15-day initiation programme comprising of sessions on mentorship into adulthood, healthy relationships, life skills training, basic home economics and the…

APO Press Releases
Interstate Conference on Upcoming Seasonal Cattle Migration Concludes in Western Bahr El Ghazal
12 mins ago
A three-day interstate conference brought together some 100 participants drawn across two states in South Sudan—Warrap and Western Bahr el Ghazal—to dialogue on a key issue: Preventing conflicts between herders and farmers during the upcoming cattle migration season. The main takeaway from the gathering was the need to deploy an integrated joint police force and…

APO Press Releases
Severe Cash Crunch Threatens WFP Operations in Ethiopia
12 mins ago
WFP urgently needs $579 million to deliver food aid and livelihood support to some 12 million Ethiopians and refugees.  This includes $316 million for food and nutrition assistance to nearly four million people in the war-ravaged north.   The Ethiopian authorities, together with WFP and other partners, are struggling to address the hunger crisis in the country. …