By APO Group
Share on Facebook Share on Twitter Share on WhatsApp Share on Telegram
Tunisian authorities are prosecuting citizens in both military and civilian courts and jailing them for public criticism of President Kais Saied and other officials, Human Rights Watch said today. Those prosecuted include members of parliament, commentators on social media, and a television host. Using repressive laws enacted prior to the Tunisian revolution, prosecutors are going after… 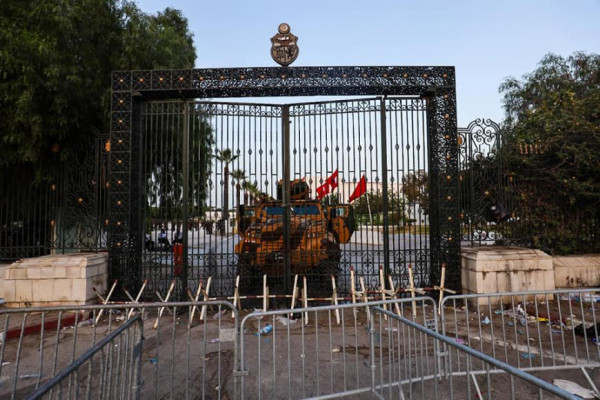 Tunisian authorities are prosecuting citizens in both military and civilian courts and jailing them for public criticism of President Kais Saied and other officials, Human Rights Watch said today. Those prosecuted include members of parliament, commentators on social media, and a television host.

Using repressive laws enacted prior to the Tunisian revolution, prosecutors are going after those who criticize Saied and who label as a “coup” his seizure of exceptional powers beginning on July 25, 2021. Of the five recent speech cases that Human Rights Watch reviewed, one person is currently serving a prison sentence for insulting the president, among other charges, three are on trial for defaming the army and insulting the president, and one is under criminal investigation on similar accusations.

“To publicly challenge the president and his seizure of special powers is to risk finding yourself in court,” said Eric Goldstein, acting Middle East and North Africa director at Human Rights Watch. “Silencing critics is doubly dangerous at a time when the president is busy concentrating so much power in his own hands.”

Saied has publicly supported, in numerous instances, prosecuting Tunisians who “insult and defame, rather than exercise their right to free speech.”

In the civilian courts, charges include “insulting the president,” under article 67 of the penal code, “accusing public officials of crimes related to their jobs without furnishing proof of guilt” (article 128), and “an attack that seeks to change the form of government or to incite people to take up arms against one another” article 72, which can be punishable by death).

On July 25, Saied announced that he was dismissing the prime minister, suspending parliament, lifting parliamentary immunity, and imposing other extraordinary measures that he said were necessary to address Tunisia’s months-long political crisis and mishandling of the Covid-19 pandemic, which had aggravated a prolonged economic slump. On August 23, Saied extended his extraordinary powers indefinitely. On December 13, he announced plans to hold a national referendum on a revised constitution in July 2022 while keeping parliament shut until elections for a replacement body in December 2022.

The lack of a constitutional court with a mandate to repeal laws that are found unconstitutional, deprives Tunisians of a key safeguard against criminal prosecutions on charges that violate their human rights, Human Rights Watch said. Repressive laws, including those criminalizing criticism of state institutions, have remained in force despite the 2014 Tunisian Constitution’s protection of freedom of speech. There is no functioning higher court that is empowered to order the repeal of these laws.

Police in Kef arrested Selim Jebali, who frequently comments on issues related to politics and social measures, on October 7. Amor Raoueni, Jebali’s lawyer, told Human Rights Watch that the authorities cited three comments from Jebali’s Facebook page posted between July 25 to October 6, in which he described the president as “a dog” and a “coup maker.”

The Kef First Instance Permanent Military Court sentenced Jebali on October 13 to one year in prison for “insulting the president,” “defaming the army,” and “accusing public officials of crimes related to their jobs without furnishing proof of guilt.” An appeals court reduced the sentence to six months on November 13. Jebali is currently serving his sentence in Mornaguia prison in Tunis.

The public prosecutor of the Tunis First Instance Permanent Military Court brought charges against Yassine Ayari, a member of the suspended parliament representing the Hope and Labor movement, for comments on Facebook posted in July that allegedly insulted the president and defamed the army, Ayari told Human Rights Watch. In his posts, he described Saied’s July 25 measures as a “military coup” and said that “Saied has transgressed prerogatives as mandated to him by the constitution,” in reference to Saied’s use of article 80 of the 2014 constitution to justify his seizure of extraordinary powers. Article 80 authorizes the president to take “necessary measures” in case of “an imminent threat” but also circumscribes the measures permitted.

On July 30, after President Saied lifted parliamentary immunity, the authorities arrested Ayari to force him to serve a 2018 prison sentence handed down by a Tunis military court for a Facebook post deemed critical of the president. The authorities released Ayari on September 22, after he had spent two months in Mornaguia Prison in Tunis. The court postponed Ayari’s trial on the new charges from November 22 until February 14, 2022.

Amer Ayed, a television host, and Abdelatif Aloui, a member of parliament from the Al Karama coalition, were arrested separately on October 3, at their homes in Monastir and Tunis respectively, on a charge of defaming the president, their lawyer, Malek ben Amor, told Human Rights Watch. The two had appeared together on the October 1 edition of the weekly Zitouna TV program Hassad 24, which Ayed hosts. During the show, both criticized Saied and called his July 25 measures a coup. Aloui also called Saied “a manipulator,” and criticized senior appointments he had made. Authorities arrested and interrogated both men separately, in the absence of their lawyers.

On October 5, an investigating judge at Tunis First Instance Permanent Military court charged both men with “insulting the president,” “an attack that seeks to change the form of government or to incite people to take up arms against one another,” “accusing public officials of crimes related to their jobs without furnishing proof of guilt,” and “defaming the army.” On October 5, the court placed Ayed in detention while provisionally releasing Aloui. On November 25, the same court released Ayed provisionally and postponed the trial to January 20, 2022.

Officers of the Anti-Criminality Unit of Ben Arous of the National Guard in Ben Arous, interrogated Amina Mansour, a social media commentator, on June 28 about a satirical Facebook post from May describing the president as the “cleanest” and “most uncorrupt president.” A public prosecutor of Tunis First Instance Permanent Military Court interrogated Mansour the same day but did not order her detention.

On July 14, the court ordered Mansour to undergo a psychiatric evaluation but Mansour refused to comply and remains under investigation. “I am currently in a legal limbo,” Mansour told Human Rights Watch. “I don’t know what this situation means, does it mean that if I try to travel for example, police can just stop me and tell me that I have a pending judicial case?”

The revolution in 2010-2011 that ousted President Zine el-Abidine Ben Ali brought Tunisians more freedom to criticize the authorities. However, authorities have, since 2012, prosecuted numerous journalists, bloggers, artists, and intellectuals for peacefully criticizing the president and other officials, under penal code provisions on “defamation,” “offenses against state officials,” and “harming public order,” all of which can result in prison terms.

At least nine social media commentators have faced criminal charges since 2017 for criticizing senior public officials. Wajdi Mahouechi, an activist, is serving a two-year prison sentence a Tunis court imposed on him in November 2020 for posting a video of himself criticizing a public prosecutor.

APO Press Releases
Government of Rwanda unveils 3 former African Heads of State as patrons for the upcoming inaugural Africa Protected Areas Congress (APAC)
1 hour ago
The Government of Rwanda through its Ministry of Environment, this morning unveiled three former African Heads of State as patrons for the upcoming inaugural IUCN Africa Protected Areas Congress (APAC). The three former heads of state include H.E Hailemariam Desalegn – former Prime Minister for Ethiopia; H.E Issoufou Mahamadou – former President Niger and H.E…
APO Press Releases
Minister Ganoo chairs sensitisation session on Industrial Property Act 2019
1 hour ago
Download logoThe Minister of Land Transport and Light Rail, Minister of Foreign Affairs, Regional Integration and International Trade, Mr Alan Ganoo, chaired, this afternoon in Port Louis, a sensitisation session for private sector institutions on the Industrial Property Act 2019. The aim of this session was to share with representatives of private institutions the main…
APO Press Releases
University of Mauritius signs MoU with Construction Industry Development Board and Land Drainage Authority
1 hour ago
Download logoThe University of Mauritius (UoM) joined hands today with the Construction Industry Development Board (CIDB) and the Land Drainage Authority (LDA), both operating under the aegis of the Ministry of National Infrastructure and Community Development, through the signature of two Memoranda of Understanding, this afternoon, in Port Louis, with a view to develop and…
APO Press Releases
Daily Noon Briefing Highlights: Ethiopia, Tonga
1 hour ago
Download logoEthiopia The UN and its non-governmental organization partners are having to reduce, postpone or cancel critical distributions of assistance, including food, medicine, and nutrition interventions in Tigray. This is because the transport of humanitarian supplies into Tigray, via the Semera-Abala-Mekelle corridor, remains suspended since 14 December, 2021 due to ongoing fighting in Abala, in…
APO Press Releases
Minister on spot over transfer of Environmental Fund
1 hour ago
Download logoMembers of Parliament on the Natural Resources Committee have criticised the Minister of Finance, Planning and Economic Development, Hon Matia Kasaija for diverting the Environmental Fund from National Environmental Management Authority (NEMA) to the Consolidated Fund, saying this has crippled NEMA’s operations. MPs said the fund was lawfully established to assist NEMA restore the…