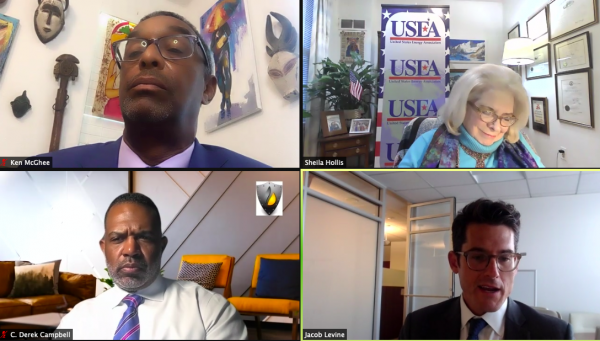 Panelists taking part in the second virtual session of the U.S.-Africa Energy Forum 2021 on Monday navigated the balance between delivering reliable energy access to the continent – while meeting global carbon emission and ESG standards – before issuing a call to action to U.S. investors and policymakers.

Organized by Energy Capital & Power under the theme, “Navigating the Transition: Africa’s Place in the Future Global Energy Sector, and Continental Transformation,” the session tackled issues of power affordability and accessibility; climate adaptation and resilience measures; Africa’s role in the global energy transition; and the path to net-zero global emissions by 2030.

“Africa has a primary and strategic role to play continent-wide and globally as both a producer and originator of clean energies,” said Campbell. “The continent needs partners in technology and finance that do not squeeze projects from a financial risk perspective. I hope the U.S. recognizes this and gives African countries the opportunity to responsibly extract hydrocarbon resources and strategic minerals and rare earths, so the continent is not a sideshow player in global energy transition discussions. If countries have the ability to produce, then they can impact the policy surrounding the production and ultimate utilization of those assets.”

“There is a tremendous opportunity for the U.S. Government to lead the way, in terms of helping Africa to drive its clean energy transition,” said Levine. “The DFC knows, based on the transactions that we are seeing in the market and those in which we are a part, that there is huge demand for clean energy projects, whether traditional renewables like solar or wind; or projects in battery storage and long duration storage that can help provide grid reliability, stability and dispatchable power, as well as other verticals along the clean energy system.”

To harness these opportunities, U.S.  government entities have expanded their commitment to financing the energy transition both at home and abroad. The DFC, for example, recently doubled its U.S. financing capacity to low- to middle-income economies from $29 billion to $60 billion.

“As part of that commitment, we are going to invest one-third of that portfolio in climate-linked projects, ranging from the power sector to transportation to core infrastructure projects – including decarbonizing trade, logistics and shipping industries – to agriculture adaptation and resilience,” said Levine. “Even though the DFC has historically focused on debt and project finance, we now have the authority to do equity investments, funds and technical assistance grants that are critical to projects underway in riskier markets.”

From new renewables to hydrogen production to energy storage, investment opportunities across the clean energy value chain have emerged as both a means of industrialization and elimination of the rampant energy poverty that currently afflicts the continent. According to a poll by ECP, 38% of respondents believe small-scale renewables hold the most potential along the African clean energy value chain for U.S. involvement, while 49% believe mini- and off-grid renewables are best positioned to answer Africa’s call for electrification.

“It is the inflection point – it is the time for both public and private investment,” said McGhee. “Unfortunately, COVID-19 took a lot of boots off the ground. Now is the time to get back to the continent and to work directly with ministers and the African Energy Chamber to implement these projects. The implementers are on the ground waiting for us – they need the funds and the support. Concrete actions would be getting congressional delegations, the Congressional Black Caucus and other members of Congress to Africa, and getting the administration to draw on its resources and its people in power with years of experience in trade and aid.”

As sub-Saharan African hydrocarbon development accounts for a negligible percent of global CO2 emissions, some African governments and industry thought leaders have argued for a different approach to cleaner energy sources in emerging markets.

“If you look at Africa from a global CO2 emissions standpoint, the continent has very little to do with that,” said Campbell. “If you cannot create baseload power, then you cannot create industry. Africa is at a point right now in which energy poverty is not ethereal and theoretical. It is real. Nations are being kept out of first-world discussions because they do not have an industrial base, and they do not have an industrial base because they do not have sustained power. Particularly in the U.S., we need to be about the business of making this happen.”

“The idea that because we have a global CO2 problem, African nations should not have access to energy, is illogical and borderline immoral,” added Levine. “As a matter of historical emissions, Africa is far ahead of the game.”

The efficacy of the U.S. in taking a leading role in Africa’s energy transition and facilitating energy development also bears political repercussions, as the country vies with Russia and China for growing influence on the continent.

“I do not think that the Biden Administration is advocating a view that certain forms of energy are outlawed or banned because they may not be clean. It is a slightly more nuanced distinction,” said Levine. “To transition into the rare earths discussion, this is an area in which we hope African countries can play a central role. We are seeing a dominance of China in the market for our future resources, whether it is the production of solar panels or electric vehicle batteries, or even veering into industries in which the U.S. previously has had a leadership role.”

“It is not only about creating jobs, but also helping to industrialize the continent and bringing its key players into the OECD world. The real narrative is about making sure the continent is on parity with the U.S,” said Campbell. “There’s a hegemonic resource battle happening globally and the U.S. is losing. We need to bring best practices from an ecological, security and optimized business standpoint to our partners in Africa.”

USAEF 2021 seeks to introduce American companies to African opportunities, promote greater investment in African nations’ energy value chains, and advance an agenda of sustainable, long-term investment in African energy (including petroleum, clean energy, power infrastructure and mineral resources) and other sectors by U.S. organizations. An in-person networking event will be held in Washington D.C. on July 12, 2021, leading up to the main summit and gala dinner in Houston, Texas on October 4-5, 2021.