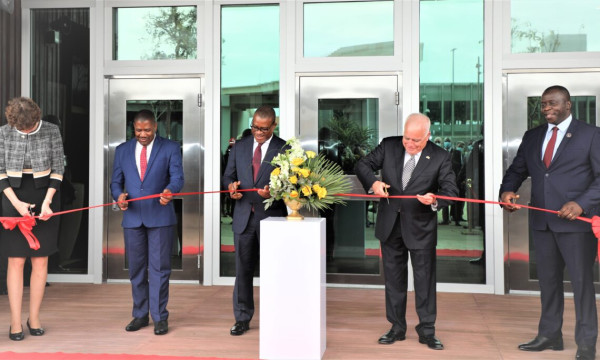 “Today we are making history.  As we inaugurate this beautiful building, we recognize the enduring nature of our bilateral relationship,” said U.S. Ambassador Dennis W. Hearne during the inauguration ceremony.  “This new Embassy building is a concrete example of the importance of the United States government’s work in Mozambique, and how important Mozambique’s success is for the region and for the world,” he said.

The new complex provides a secure, modern, sustainable, and innovative platform for U.S. diplomacy in Mozambique and houses all U.S. Government agencies with the exception of the Peace Corps.  The five-year construction project created more than 1,000 local jobs and injected more than US$22 million into the local economy.  The 10-acre compound models the latest energy efficient features.  The Embassy building recycles its air every 15 minutes, and the compound has its own irrigation system.  The ultra-high-performance concrete fins encircling the Embassy are reminiscent of the wood carvings of the Makonde tribe in northern Mozambique and provide enough shade for the large building to reduce the amount of energy needed to keep it cool.  Sustainable landscaping that represents the three major biomes of Mozambique – dunes, savannah, and forest – are integrated to create public areas and outdoor meeting spaces for employees and visitors.

American and Mozambican artwork is featured inside the new Embassy building. Goncalo Mabunda from Mozambique and Alice Hope from the United States created two of the largest, most breath-taking installations.  They both used recycled materials that are normally discarded and oftentimes contribute to pollution and transformed them into beautiful sculptures and thought-provoking works.   This building and its artwork show how much American and Mozambican cultures have in common, how the United States-Mozambique relationship is growing, and how culture connects peoples around the world.

This new, state-of-the-art building is a clear example of the strong and growing relationship between the United States of America and the Republic of Mozambique.  In addition to more than US$500 million in annual assistance programs, the U.S. Government is the largest bilateral vaccine donor to Mozambique, having donated nearly 640,000 single-dose Johnson & Johnson vaccines to date, and invested more than $62 million worth of support for Mozambique’s response to the COVID-19 pandemic.  U.S. Government development assistance is robust in the health sector, and supports effort to help children learn to read, improve farmers’ incomes, protect Mozambique’s incredible biodiversity, and much more.  The U.S. Government is developing a second Millennium Challenge Corporation compact that will substantially improve the agriculture and transportation sectors, is bolstering Mozambique’s capabilities to combat terrorism and respond to the resulting humanitarian crisis in Cabo Delgado, and is supporting strong democratic institutions and a free press.

Distributed by APO Group on behalf of U.S. Embassy in Mozambique.

Nigeria
NSCDC arrests three suspects, impounds 71,000 litres of adulterated petroleum product
2 hours ago
The Nigeria Security and Civil Defence Corps (NSCDC) in Cross River has paraded three suspects conveying 6,000 litres of illegally refined diesel and kerosene into the state concealed in sack bags.
Sport
Italian FA probing suspect transfers: media reports
2 hours ago
The Italian Football Federation (FIGC) has opened an investigation into a series of suspicious transfers, according to Italian media reports on Wednesday.
Nigeria
Hisbah arrests man who wants to sell himself out of poverty
2 hours ago
A 26-year-old man has been arrested by Kano Hisbah Commission after he said he would sell himself out of poverty. [AD] A viral picture of Aliyu Idris showed him carrying a sign in which he said he wanted to sell himself for N20 million. Before he was taken into custody, Idris, a tailor, told reporters…
World
World Bank suspends aid to Sudan after military coup
2 hours ago
The World Bank said Wednesday it has suspended aid to Sudan following the military takeover that deposed the prime minister.
World
Tunisia shuts TV channel of ex-presidential candidate
3 hours ago
Tunisia's top media authority on Wednesday ordered the closure of Nessma TV channel, founded by former presidential candidate Nabil Karoui who is detained in Algeria.

APO Press Releases
African Development Bank approves $10 million equity investment to boost cold storage and distribution of food, pharmaceuticals, in East Africa
25 mins ago
Download logoThe Board of Directors of the African Development Bank (AfDB.org) has approved an equity investment of $10 million in the ARCH Cold Chain Solutions East Africa Fund (CCSEAF) to support the development, construction and operation of greenfield cold storage, temperature-controlled solutions and distribution facilities in East Africa. The investment will advance the Fund toward…
APO Press Releases
Support from TIKA to the Internal Peace Process in South Sudan
25 mins ago
Download logoTurkish Cooperation and Coordination Agency (TİKA) provided equipment to the press unit established under the Ministry of Peace Building in South Sudan. TİKA provided furniture, computers and printers to a press unit established within the ministry. In this unit, peace stories will be told, important community leaders will be discussed through broadcasts and examples…

APO Press Releases
Shujaa Top Seeds for this Year's Safari Sevens
25 mins ago
Kenyan side, Shujaa are top seeds for this year’s Safari Sevens which kicks off at the Nyayo National Stadium on Saturday 30 October 2021. They have drawn in Pool A alongside Zimbabwe, Germany and Nigerian side Stallion 7s. Two time winners Samurai headline Pool B which also comprises SA All Stars 7s Academy, Red Wailers…
APO Press Releases
UNHCR Egypt Supports Government Efforts to Digitalize COVID-19 Vaccination
25 mins ago
Download logoUNHCR delivered 200 laptops to the Ministry of Health to support its efforts in health digitalization exacerbated by the COVID-19 pandemic. The laptops will support in the deployment of the national vaccination plan against COVID-19. UNHCR, the UN Refugee Agency, donated 200 laptops to the Ministry of Health and Population (MoHP) to support the…

APO Press Releases
What Does International Oil Companies Divestiture Mean for Africa -- and for Climate Initiatives? The State of African Energy 2022 (By NJ Ayuk)
25 mins ago
By NJ Ayuk, Executive Chairman of the African Energy Chamber Giving indigenous companies a chance to step up their game in the African energy market is critical. For years, the leaders of the African Energy Chamber have been calling for this and working to give local companies every opportunity to participate in and prosper in…
APO Press Releases
The SABC acquires TV broadcast Rights for the NBA
25 mins ago
Download logoThe South African Broadcasting Corporation (SABC), through SABC Sport (https://bit.ly/3ClY8su) is pleased to announce an exciting multiyear television broadcast rights agreement with the National Basketball Association (NBA) (www.NBA.com).  In the inaugural live broadcast of the 75th Anniversary Season, the Washington Wizards will host the Boston Celtics on Saturday, 30 October at 23:00 SAST.  The…