UNMISS and UNDP Partner to Reconcile Feuding Communities through a Peace Dialogue in Ikotos, Eastern Equatoria

By APO Group
Share on Facebook Share on Twitter Share on WhatsApp Share on Telegram
Advocating for peace and social cohesion among the Obira, Burung, and Loyoro communities in Ikotos county, Eastern Equatoria, was inevitable, considering the escalating tensions within them. Although the United Nations Mission in South Sudan (UNMISS) and partners have organized several peace dialogues for these communities in the past, cattle raids, revenge killings, roadside robberies and… 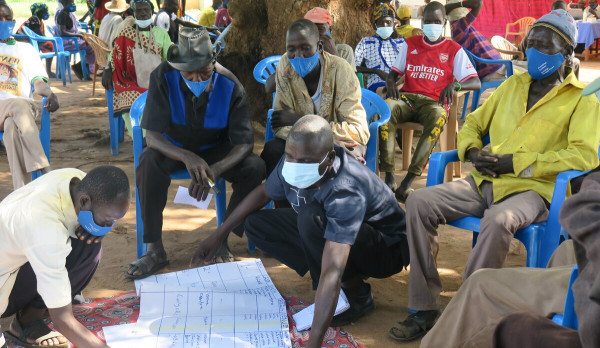 Advocating for peace and social cohesion among the Obira, Burung, and Loyoro communities in Ikotos county, Eastern Equatoria, was inevitable, considering the escalating tensions within them.

Although the United Nations Mission in South Sudan (UNMISS) and partners have organized several peace dialogues for these communities in the past, cattle raids, revenge killings, roadside robberies and sexual violence against women have persisted among the people of the three villages.

“Women need freedom to move to health centers, markets and farms. Most importantly, a girl child must never be used as compensation or exchange for any harm caused to communities,” said Grace Kasara, a Member of Parliament in Eastern Equatoria at the latest peace conference held in Chahari village.

For peace to hold, the communities resolved to implement the following action points: Peacefully co-exist; shoulder collective responsibility for implementing the provisions of the Revitalized Peace Agreement; form a joint peace committee and nominate advisers; avoid harboring criminals; compensate families of persons killed intentionally or accidentally as well as women and young girls who have suffered from sexual abuse; allow free movement of people and goods between the villages; and end the consumption of harmful alcoholic beverages that fuel fights.

A joint follow-up committee has been formed to monitor and report on the successes and challenges of implementing new resolutions and action points, especially those related to protecting women.

“One important thing that this dialogue has shown us is how crucial following up on implementation is. Without follow-ups, the dream of peace exists only on a piece of paper,” said Lucie Duchateau, a Civil Affairs Officer working with UNMISS in Torit.

The two-day initiative was funded by the United Nations Development Programme (UNDP).

“We strongly urge state authorities to enforce the rule of law so that community members are protected from mob justice and revenge. And to my fellow women, support implementation of the action points at your own levels,” said Margaret Lado, a Peace and Conflict Resolution Officer from UNDP. “I hope our next visit to this area will be to discuss development, and not conflicts,” she added.

UNMISS continues to collaborate with UNDP and other partners to support peace and conflict mitigation projects in the area.

World
Senegal transport workers end strike
1 hour ago
Senegalese transport unions ended a strike overnight from Friday to Saturday that had paralysed capital Dakar and other regions over police harassment and illicit competition.

World
Merkel urges Germans to get vaccinated in final podcast
1 hour ago
German Chancellor Angela Merkel on Saturday urged Germans to get vaccinated against Covid-19, speaking days ahead of leaving office in the final episode of more than 600 weekly video podcasts.
APO Press Releases
Southern Africa Set for Economic Rebound, but Impact of Covid-19 Lingers
1 hour ago
Download logoSouthern Africa is set for an economic rebound in 2021 and 2022, provided the Covid-19 pandemic tapers off, according to a report published by the African Development Bank (www.AfDB.org). Like elsewhere on the continent, the pandemic will be a deciding factor in the region’s economic fortunes. If all goes well, and that includes a…
APO Press Releases
2021 African Economic Conference (AEC): Experts call for African Crypto Currency, Integrated Capital Market to Ease Business Costs
1 hour ago
Download logoA common crypto currency and an integrated capital market could boost trade in Africa and sustain growth after the Covid-19 crisis, experts said at the 2021 African Economic Conference on Friday. But the continent first needs to harmonise national rules and protocols governing the financial systems of individual countries to make the reforms workable,…