By APO Group
A two-day, dialogue-based forum facilitated by the UNMISS Civil Affairs Division in partnership with the Office of the State Advisor for Security, Peace and Reconciliation in Malakal, Upper Nile state, had one main aim: To improve relationships and create harmony between uniformed forces and citizens. 64 participants from military groups, the national police, organized forces… 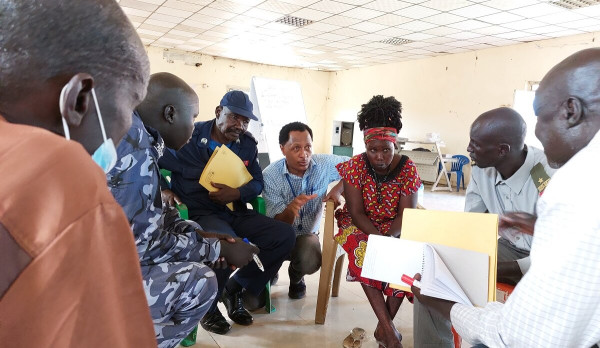 A two-day, dialogue-based forum facilitated by the UNMISS Civil Affairs Division in partnership with the Office of the State Advisor for Security, Peace and Reconciliation in Malakal, Upper Nile state, had one main aim: To improve relationships and create harmony between uniformed forces and citizens.

64 participants from military groups, the national police, organized forces and community members came together to discuss how to build bridges amongst each other and restore trust.

“Since the civil war broke out in December 2013, relationships between civilian community members and uniformed personnel, be it military or the police, has deteriorated,” reveals Athieb Okech Ajang. “Now that a peace deal is in place and our country is slowly making the transition from conflict to recovery and peace, it’s important for all of us to be on the same page and coexist peacefully.”

Colonel John Kasara Kong, a participating police officer, described the workshop as a platform which provided a space for local law enforcement to clear the air with the communities they are meant to protect and serve.

“We managed to have frank and open discussions with civilian community members and reassure them that we are here to help,” he stated. “We aren’t here to instill fear. Our job is to protect them and their property.”

Youth representative Monica Deng, for her part, said she was happy to have the opportunity to share her concerns about the challenges faced by civilians, especially women and girls, in Upper Nile.

“This was a very useful gathering because we could speak freely about the problems we face as women. Sometimes, we hear stories of uniformed men assaulting women and this tarnishes the image of every officer. I’m hopeful that after today’s conversation, we will have less to worry about,” she averred.

Jaroslaw Jan Rabantek, Civil Affairs Team Leader, UNMISS Malakal applauded participants for their enthusiastic and honest opinions and urged them to utilize dialogue to promote reconciliation and social cohesion among the communities.

“I encourage you to continue to communicate with each other to realize the aspirations of peace and prosperity. It is a collective responsibility and every individual has their part to play in ensuring a better future for the citizens of South Sudan,” said Mr. Rabantek.

In conclusion, the Deputy Governor of Upper Nile, James Tor Monybouny, reaffirmed his government’s commitment to restoring confidence and cooperation among all citizens of the state.

“You have sat together, spoken with each other and shared your ideas and hopes. This sort of open exchange is what we need to leave the scars of the past behind and forge a bright future. I hope you will continue to keep these lines of communication open and, by doing so, learn to trust one another again.”

World
Obama hits the stump in US battleground Virginia
57 mins ago
Former US president Barack Obama was due to campaign Saturday in a neck-and-neck state election touted as a bellwether of public opinion on Joe Biden's first year in the White House.
Sport
Lewandowski scores to keep Bayern top
1 hour ago
Robert Lewandowski stated his case to win the Ballon d'Or by scoring his 10th Bundesliga goal in nine games this season for leaders Bayern Munich
Nigeria
NAF pounds insurgents around Lake Chad
1 hour ago
The Nigerian Air Force (NAF) says its aircraft in Operation ‘Hadin Kai’ (OPHK) have continued to pound insurgent targets on islands
World
Turkey's Erdogan orders expulsion of 10 ambassadors
1 hour ago
Turkish President Recep Tayyip Erdogan on Saturday told his foreign minister to expel the ambassadors of 10 countries including Germany
Nigeria
Military, police, hunters march through Maiduguri in show of solidarity
2 hours ago
The military on Saturday conducted a combined route march in Maiduguri for security agencies to keep fit and synergise for effectiveness.