By APO Group
A two-day peacebuilding dialogue organized jointly by the United Nation Mission in South Sudan (UNMISS) and the Ministry for Peacebuilding in Rumbek recently concluded in Wulu county. The main aim: To bring together the communities residing in Barghel, Wulu county, and Agangerial, Cuiebet county, and enable discussions between them to reduce instances of intercommunal conflict… 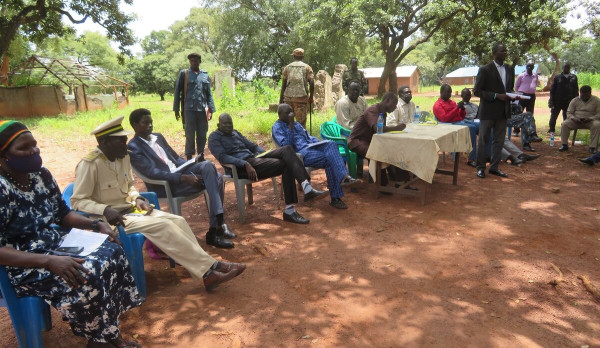 A two-day peacebuilding dialogue organized jointly by the United Nation Mission in South Sudan (UNMISS) and the Ministry for Peacebuilding in Rumbek recently concluded in Wulu county.

The main aim: To bring together the communities residing in Barghel, Wulu county, and Agangerial, Cuiebet county, and enable discussions between them to reduce instances of intercommunal conflict and enhance peaceful coexistence.

For the past five years, tensions between residents of both counties have remained high and often resulted in clashes that resulted in loss of lives, destruction of property and displacement.

The event was attended by the county commissioners of both Wulu and Cuiebet and brought together youth groups, women’s representatives, community leaders and elders to find solutions to ending the internecine strife.

Speaking at the event, Jimma Dafalla Rajaf, County Commissioner, Wulu, encouraged both communities to resolve disputes amicably and create an environment that encourages displaced people to return to their original settlements.

“The cost of intercommunal conflict is borne by innocent people—women, young children and men,” stated Commissioner Rajaf. “If you want your children to have the opportunity to build a better future for themselves, you will have to shoulder individual responsibilities and work together to usher in a more harmonious environment for them to grow up and complete their education.”

“There is nothing positive that emerges out of conflict,” he stated. “It only prolongs the suffering of communities. So, I urge all of you to embrace peace, dialogue and resolve to build social cohesion in Barghel from the ground up. Once there is peace, you will all be able to cultivate your farms and usher in an era of prosperity and stability for everybody.”

For his part, Abraham Makon, a community representative, stressed that residents of both counties have already made steps to reconcile their differences and put aside the scars of the past.

“We are grateful to the state government and UNMISS for their efforts in improving the overall security situation in our areas which has greatly improved our ability to move freely and boost our livelihoods through small trade,” he averred. “We understand the valuable currency that is durable peace and are making efforts at our levels to resolve all misunderstandings between the two communities.”

Abraham’s words were reinforced by Chol Kuotwel, the local peace mediator working with both counties.

“Safety, stability and respect for the rule of law is something that every community member has a duty to contribute to. We have to work with authorities to ensure that criminals and to reduce its occurrence in the first place,” he stated.

The two-day forum ended with recommendations for free movement of people, sharing of resources, formation of special courts for speedy justice and joint efforts to reduce criminality.

Nigeria
Fagbemi emerges factional Kwara APC Chairman
19 mins ago
Mr Sunday Fagbemi has emerged as Chairman of the factional All Progressives Congress (APC) loyal to Gov. AbdulRaman AbdulRazaq of Kwara.
Sport
Man United lose at Leicester, five-goal Liverpool thrash Watford
23 mins ago
Manchester United succumbed to a first away league defeat for 30 games by losing 4-2 at Leicester as Liverpool thrashed Watford 5-0 on Saturday.
World
15 US missionaries and family kidnapped in Haiti
34 mins ago
About 15 American missionaries and family members were kidnapped on Saturday by a gang outside the Haitian capital, a local security source told AFP.
Nigeria
Lagos APC: Any other congress, tea party — Sanwo-Olu
44 mins ago
Gov. Babajide Sanwo-Olu on Saturday said that any other All Progressives Congress (APC) state congress in Lagos State apart from the one held at Mobolaji Johnson Arena, remained a tea party.
Nigeria
Dennis Otiotio emerges Bayelsa APC chairman
51 mins ago
Chief Dennis Otiotio, a political associate of Minister of State for Petroleum Resources, Chief Timipre Sylva, has emerged Bayelsa