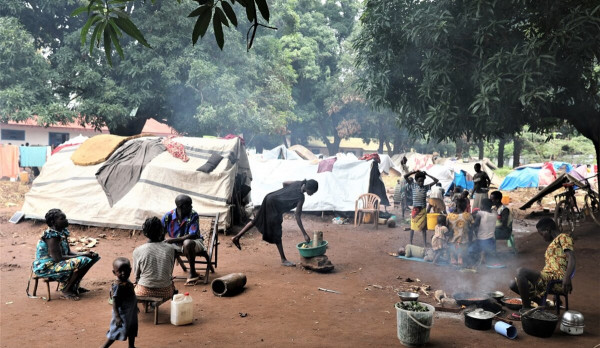 “They cut my ear off and killed my relatives,” says a 27-year-old community member from the greater Tambura area who prefers to remain unnamed as he recounts the chilling tale of his abduction last month, where he lost his left ear and three of his brothers were slaughtered.

“Armed attackers suddenly appeared and held me at gunpoint, ordering us to sit down. They took off my shoes and started removing belongings,” he continues.

“I was terrified when I felt a knife at my ear. They cut it off, threw it to the ground and asked me if I would like to eat my own flesh. Another attacker taunted us by asking if they should massacre us all under a big tree. The minute I heard that, I knew they would kill us, and it is better to run than be shot to death. When I started fleeing, I heard three people screaming; the screams stopped abruptly. I walked the whole night to be able to report to the police,” he says in a grim conclusion to this horrific story.

The greater Tambura region in Western Equatoria, South Sudan, continues facing intercommunal conflict, displacement and human rights violations. The situation on the ground is dire, to say the least.

Save for a few people, life has been emptied from villages here; houses remain deserted, and most people have fled to internally displaced sites.

A team of United Nations peacekeepers have stepped up patrolling in the area, protecting and assessing the human rights situation while advocating for the protection of lives and well-being of communities.

“It is clear, that we are talking about dozens of persons who have been killed or have disappeared. Their family members, wives and children are desperately searching for them,” reveals Leticia Marino, an UNMISS Human Rights Officer.

“We are talking about an immense loss of capital, destroyed crops and a situation that can give rise to an impending food crisis. It’s a massive humanitarian catastrophe with enormous losses for the peace process and for South Sudan,” she adds.

More than 30,000 people are estimated to have been displaced and some 500 households are camping in a church compound in Mupoi payam [administrative division]. Father Bairi Nathaly, the local priest, says man women and children arrived on foot.

“I was shocked to see children coming all the way from Tambura. They had walked for days, their legs were all swollen, and they desperately need medical attention, food and shelter,” he reveals.

For his part, Anthony Moudie, Protection, Transition and Relief Officer, UNMISS, says that the UN peacekeeping mission and humanitarian partners are doing everything they can to help and protect the recently displaced. “There are no words to describe this level of suffering,” he adds.

Apart from fortifying the security situation through the presence of Blue Berets, the mission’s Civil Affairs Division is engaging local actors to advocate for peaceful coexistence among the communities in greater Tambura.

“We are working closely with the authorities, civil society groups, religious leaders and the community elders along with women and youth representative to open up platforms for open dialogue,” says Poo Lin Stefano Wong, a Civil Affairs Officer.

Last week hundreds of people from local communities attended a peace rally organized by faith-based groups in Western Equatoria under the aegis Interfaith Council of Peace as part of efforts to bring peace end the senseless conflict here.

The primary task of protecting civilians and ensuring that law and order is maintained, though, lies with the government as highlighted by Christopher Murenga, Head of the UNMISS Field Office in the state.

“The UN is here to support the government, but they need to take up the task of protecting their civilians, of stabilizing the situation, reducing violence and engaging all conflicting parties in dialogue as a means in ending the problems that we are currently facing in Tambura,” he states.

“We have to work in partnership to ensure a durable peace for these citizens to be able to go on with their daily lives.”