By APO Group
The United Nations Mission in South Sudan (UNMISS) has trained forces of the Sudan People’s Liberation Army in Opposition (SPLA-iO) and South Sudan People Defense Forces (SSPDF) on human rights and international humanitarian laws in Magwi county located in Eastern Equatoria state. “I am convinced that my senior commanders have acquired in-depth knowledge on the subject… 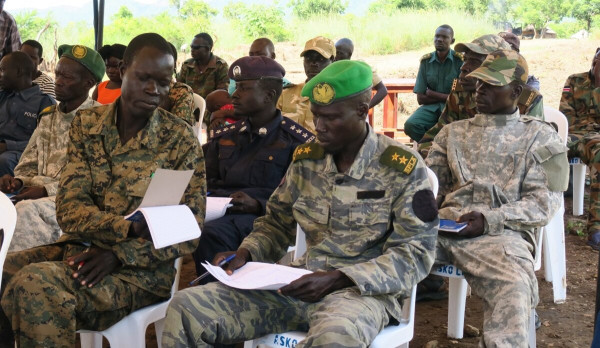 “I am convinced that my senior commanders have acquired in-depth knowledge on the subject matter of the workshop and there will be no case of human rights violations that will go unreported,” said Brigadier General Kulang Tarib of the SSPDF. “I also encourage my female senior commanders to equally take the responsibility of reporting any sexual violence committed by soldiers.”

The Human Rights Division of UNMISS in Eastern Equatoria conducted two separate workshops, where over 100 soldiers from were reminded of their human rights obligations to enhance their professionalism.

It also served to remind commanders to take responsibility and account for human rights violations committed by junior officers under their command.

“As a senior commander, I assure the community of returnees and anyone who crosses through our area of responsibility that we will protect, take responsibility for, and account for any violations against them,” assured Brigadier General Okeny George Lam, the senior commander in charge of Ashwa cantonment site.

In South Sudan, there has been a lack of accountability for violations committed during recent conflicts, especially against women and children.

“This training is part of regularly organized awareness campaigns provided by UNMISS to all forces and civilians so they can change their mindset and broadly understand the repercussions of human rights violations,” said Anthony Nwapa, a representative of the UN peacekeeping mission.

“As commanders you are to treat both everybody with a sense of humanity and allow human rights to flourish despite conflict,” added Nwapa.

Nigeria
Nigeria’s economy to grow by 2.7% in 2022 — IMF
41 mins ago
The International Monetary Fund (IMF) has predicted Nigeria’s economy to grow by 2.6 per cent this year and a 2.7 per cent growth in 2022.
Nigeria
Lagos airport epicentre of drug trafficking in Nigeria - Marwa
1 hour ago
The chairman of the National Drug Law Enforcement Agency Buba Marwa Thursday said Murtala Muhammed International Airport in Lagos is the epicentre of drug trafficking in Nigeria. Marwa based his assertion on the volume of drugs seized at the airport since the beginning of the year. "Murtala Mohammed International Airport remains the epicentre of the…
World
Man, 25, in dock over murder of UK MP David Amess
2 hours ago
A 25-year-old man appeared in court on Thursday after being charged with the murder of British MP David Amess, who was stabbed to death last week in what lawyers said was an attack with a "terrorist connection". Ali Harbi Ali, who was arrested at the scene of the killing in Leigh-on-Sea, east of London, last…
Telecoms
Nigerians made 34m emergency calls in eight months
2 hours ago
Danbatta sees huge role for the media in conflict resolution From January to August, 2021, about 34 million calls were made by Nigerians, who were seeking succor during emergencies or under any circumstance posing security issue and unrest within their communities. These emergency calls were made using the 122 Emergency Number. The calls were processed…
What's New
R. Kelly Placed On Suicide Watch Following Conviction
2 hours ago
R&B singer R. Kelly has been placed on suicide watch following his conviction for sex trafficking charges in New York. The 54-year old singer's attorney Steve Greenburg revealed this at the first court hearing since a jury found Kelly guilty three weeks ago. Greenburg told a federal judge in Chicago that R. Kelly had been…

APO Press Releases
The NBA and Formula 1 Announce Content and Promotion Partnership to Celebrate The NBA's 75th Anniversary Season and the United States Grand Prix
5 hours ago
Content of F1 Cars in Custom NBA Livery to Drop on NBA (www.NBA.com) and F1 Social Media Platforms Starting Today; F1 Drivers to Compete in Free Throw Challenge for Charity at ESPN Studio in the Circuit of the Americas Paddock Alongside NBA Legends. The National Basketball Association (NBA) and Formula 1® (F1) today announced a…

APO Press Releases
OPEC to Showcase World Oil Outlook 2021 at African Energy Week in Cape Town
5 hours ago
African Energy Week (AEW), taking place on the 9th-12th of November 2021, is committed to emphasizing the role that oil will continue to play in the continent’s energy future. Despite the global shift towards cleaner sources of fuel, the African continent – representing the highest number of people without access to energy – still requires…