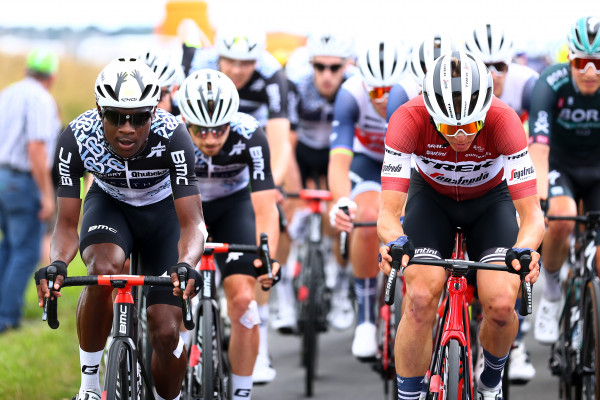 Stage 4 of the Tour de France was somewhat of a welcomed ‘relaxed’ stage, given the fact that a number of riders are nursing injury after numerous crashes in the opening three stages of the French grand tour.

Today’s stage saw riders take on a flat 150km route, from Redon to Fourges. Just two riders jumped into the break of the day and so it was relatively easy for the sprinter teams to control the gap by sharing the workload in the peloton.

Team Qhubeka NextHash had plans to look after Max Walscheid for the expected sprint finale after the German secured 10th place in yesterday’s reduced group sprint. From 30km to go the team was well represented near the head of the peloton.

In what should have been a straight forward sprint finish, it was nearly not, as Brent Van Moer (Lotto-Soudal) attacked his breakaway companion in the final 10km, to go solo for the line. The peloton did not react to the increase in speed up the road, which saw Van Moer push out the gap to over a minute.

In the end, the young Belgian come up just 200 metres short before the sprinters came flying by, with Mark Cavendish taking a strong victory. Walscheid was not in a position to contest for the win and crossed the line in 16th place.

Simon Clarke
It’s a little bit embarrassing to say but it’s my first day without a crash! I've gone a few Tours without crashing at all so think that I’ve made up for it in the first three days this year. Today fortunately was a much more straightforward day with the plan to look after Max for the sprint and it looks like it was a very exciting final.

We don’t have a big leader or general classification rider here but we’re a united team and we’re working with that mentality; we’re trying to show our strength nonetheless.

Victor Campenaerts
Short stage today but with a super-fast final. We committed well as a team, we were riding according to our plan but perhaps in the final it was a bit easier to move than we expected, so we were one or two short but it was a great Ubuntu spirit.

Everybody was involved, especially Nic and Sean, who did a great effort in keeping us in front for such a long time. It was very valuable, yesterday we didn’t have them in the final because they crashed but today they didn’t and they showed how valuable they are. Not the result we wanted but very promising for the stages to come.