WHO, UNFPA, UNICEF host training on prevention of sexual exploitation and abuse in the Democratic Republic of the Congo

By APO Group
Share on Facebook Share on Twitter Share on WhatsApp Share on Telegram
When an Ebola outbreak was declared in their town on 8 October this year, the residents of Beni, in the eastern part of the Democratic Republic of Congo, needed reinforcements – not only against the risk of contracting the disease itself, but also against the risk of sexual exploitation and abuse at a particularly vulnerable… 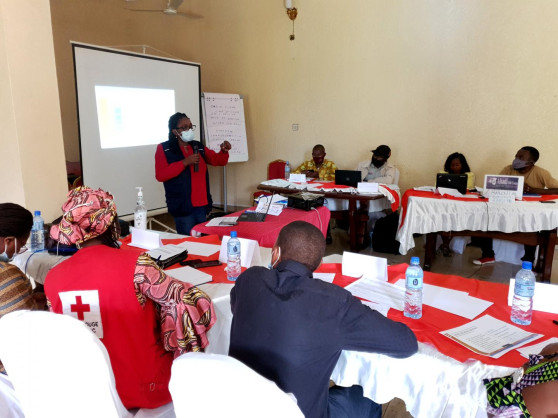 When an Ebola outbreak was declared in their town on 8 October this year, the residents of Beni, in the eastern part of the Democratic Republic of Congo, needed reinforcements – not only against the risk of contracting the disease itself, but also against the risk of sexual exploitation and abuse at a particularly vulnerable moment.

To reduce the latter risk, WHO, UNICEF and UNFPA jointly organized prevention of sexual exploitation and abuse training for focal points at agencies, international and non-government organizations working on the front lines of the Ebola response. Held in Beni on 20 October 2021, the training was a direct response to the findings of the Independent Commission on Allegations of Sexual Exploitation and Abuse during the Response to the 10th Ebola Outbreak in DRC, released last month.

“The training is part of the strategy to prevent acts of sexual exploitation and abuse,” noted Dr. Islande Georges Cadet, WHO Prevention of Sexual Exploitation and Abuse  Coordinator in North Kivu, who led the training. “For us, these are immediate actions that will ensure that all humanitarian actors intervening in the response to the Ebola resurgence can understand and respect the fundamental principles of human rights towards the affected population.”

For Enyo Gbedemah, coordination team member and UNICEF child protection specialist for Maniema and South Kivu provinces, the training was critical to protecting vulnerable populations against incidences of sexual abuse.

“We need to strengthen the internal capacities of all organizations involved in the response, and to ensure that everyone is informed of the zero-tolerance policy to sexual exploitation and abuse – what to do and what not to do,” said Gbedemah. “Placing survivors at the heart of our concerns is essential. We must strengthen mechanisms for reporting sexual exploitation and abuse so that fewer cases go undisclosed.”

The initial cohort of 24 trainees was equipped to address reports of sexual abuse that arise during health interventions in their respective communities, to reinforce the zero-tolerance policy against perpetrators, and to ensure that survivors of sexual exploitation and abuse are offered support.

That support includes medical care, psychosocial support, legal and judicial support, and socioeconomic reintegration after assessing the needs of survivors.

Trainee Esther Vira Kavughe, of the Beni-based Collective of Farmers in Defence of Human Rights came away with a clear mandate for raising awareness.

“We have a key message to spread in our communities: to refuse any job offered in exchange for sex, especially in our regions already ravaged by armed conflict and poverty,” she said.

Further training sessions are planned for the next few weeks in Beni, and will focus on community liaisons and action cells, religious leaders, and youth associations.

UNFPA’s Christelle Nziavake, Prevention of Sexual Exploitation and Abuse Coordinator based in Ituri province, noted that the training drew on existing strategies for responding to gender-based violence.

“These trainings are part of an holistic, victim-centred approach to intervention,” she said.

Distributed by APO Group on behalf of WHO, Democratic Republic of Congo.

World
Nearly 40 percent of Tigrayans face 'extreme lack of food'
13 mins ago
Nearly 40 percent of people in Ethiopia's Tigray are suffering "an extreme lack of food" in the face of an extended de-facto blockade of the war-hit region, a UN agency said Friday.
Nigeria
Task force recovers 500 cow, sheep rustled in Niger state
32 mins ago
The joint task force has recovered 500 cows and sheep rustled in Shiroro and Munya Local Government areas of Niger state.
World
Malaysian floods caused $1.4 bn in losses
39 mins ago
Devastating floods that hit Malaysia in recent weeks caused about $1.4 billion in losses, with widespread damage to homes, businesses and factories, the country's statistics department said on Friday.
Sport
Vlahovic at Juventus for medical ahead of transfer
44 mins ago
Serbia striker Dusan Vlahovic arrived at Juventus for a medical Friday ahead of a much-anticipated winter break transfer to the Italian giants.
World
Gunman arrested in Japan as doctor taken hostage dies
52 mins ago
A Japanese gunman was arrested after he allegedly took a doctor hostage and shot him, police said Friday, with local media reporting that the victim had died from his wounds after the 11-hour standoff.

APO Press Releases
EnerGEO, African Energy Chamber (AEC) Call on Scientific Community to Rethink Distorted and Misinformed Data and Research on Seismic Survey Impacts
NOW
Global representative of the energy geoscience industry, EnerGEO Alliance (EnerGEO), and African energy sector advocate, the African Energy Chamber (AEC) (www.EnergyChamber.org), have called on the scientific community - most notably the Scientific Advisory Group on Energies (SAGE) - to reconsider the fundamentally flawed and misinformed data and research that suggest scientific surveys have significantly negative…
APO Press Releases
Cameroon: UK in Cameron mobilizes the private sector for Climate Action
NOW
Download logoThe British High Commission has granted £10,000 as seed funding from the UK Government’s Climate Diplomacy Fund to kick-start the Game Changers. The grant will help the Game Changers mobilise stakeholders (co-funders, enablers, volunteers), build relevant capacity and canvass more resources to work towards achieving the goal to reach 1 million Cameroonians within 24…
APO Press Releases
ECOWAS Leaders to hold Extraordinary Summit Virtually on the Political Situation in Burkina Faso
NOW
Download logoECOWAS Leaders to hold Extraordinary Summit Virtually on the Political Situation in Burkina Faso H.E. Nana Addo Dankwa Akufo-Addo, President of the Republic of Ghana and Chairman of the Authority of Heads of State and Government of the Economic Community of West African States (ECOWAS) has convened an Extraordinary Summit of the Authority on…
APO Press Releases
Severe hunger tightens grip on northern Ethiopia
NOW
Download logoA new food security assessment, released today by the United Nations World Food Programme (WFP), shows that almost 40 percent of Tigrayans are suffering an extreme lack of food, after 15 months of conflict. Meanwhile, across all three conflict-affected regions of the north more than 9 million people are in need of humanitarian food…
APO Press Releases
COVID 19: Reopening of Morocco's airspace from Feb. 7 (statement)
NOW
Download logoThe government announced Thursday the reopening of the airspace to flights to and from Morocco as of February 7, 2022. This decision comes in accordance with the legal provisions relating to the management of the state of health emergency and following the recommendations of the scientific and technical commission and taking into consideration the…
APO Press Releases
New Danish contribution for Anticipatory Action in Eastern Africa
NOW
Download logoThe United Nations World Food Programme (WFP) welcomes a contribution of DKK 28.4 million (USD 4.3 million) from the Government of Denmark for Scaling Up Anticipatory Action for Food Security to reduce the effects of climate shocks in the Horn of Africa. This is in addition to the DKK 15 million (USD 2.2 million)…