By APO Group
Share on Facebook Share on Twitter Share on WhatsApp Share on Telegram
A two-day conference that brought together women political players, civil society organisations, journalists and academics has amplified calls for inclusion of more women candidates in Somalia’s upcoming legislative elections. The conference, held with support of the Political Affairs Unit of the African Union Mission in Somalia (AMISOM), is part of wider efforts advocating for more… 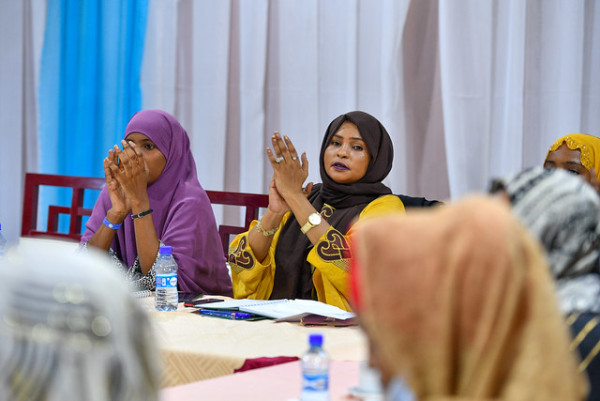 The conference, held with support of the Political Affairs Unit of the African Union Mission in Somalia (AMISOM), is part of wider efforts advocating for more women representation in national politics. Somalia is holding national elections, and the country has set itself a minimum benchmark of 30 per cent women’s representation in Parliament so as to improve participation and representation of Somali women in decision making and in politics.

At the outset of the conference, the Federal Electoral Implementation Team (FEIT) Gender Commissioner, Fatima Mohamed Abdullahi stated the objective of the forum, is to discuss the strategies to ensure the 30 percent women’s quota, the challenges and way forward in the ongoing Lower House elections.

“Getting 30 percent of the 275 seats in the Parliament is an uphill task which needs all of us to be united and fight for the women’s share to be realised,” she added. “All of us, women politicians and media professionals, the youth, members of the Somali National Women Association and civil society activists must come together to put extra effort during the Lower House elections so that we can do better than we did in the senate elections.”

Zahra Mohamed Ahmed, a member of the Committee of Goodwill Ambassadors and the Winner of the 2021 International Woman of Courage Award, said it was important that barriers that prevent women from political participation be removed if the country is to benefit from representative and inclusive development.

“We are very fortunate this year in that a lot is being done. Women candidates should not at all listen to the voices that are meant to instill fear in them and discourage them from participating in the elections. They should not listen to anyone saying that the elections will be rigged. That will not happen,” said Zahra.

AMISOM’s Political Officer, Muna Hassan Mohamed, urged the participants to double their efforts, assuring them of AMISOM and the Somali security forces’ commitment to protect all candidates, including women, during the electoral process.

“Concerns have been raised about threat and intimidation against women vying for seats. I want to assure all female candidates that AMISOM and the Somali government are jointly providing election security. We are doing this to ensure the rights of every citizen involved in the election process are protected,” said Muna.

AMISOM is mandated to provide security during the process in collaboration with the Somali security agencies to ensure that the electoral process is secured. In particular, AMISOM Police and the Somali Police Force (SPF) are both part of the National Elections Taskforce, the highest security team tasked with securing the elections.

Bahsan Osman, a candidate for the upcoming Lower House polls from South West State, said she was reassured by the security arrangement in place.

“We are hopeful that this year’s election will be different and we have confidence in the security provided. If we get elected to parliament, our people will benefit the most since women, who have borne the brunt of war and instability for the past 30 years, will now play a meaningful role in peace and nation building,” added Osman.

Nigeria
APC Reconciliation Committee assures members of fair hearing
NOW
The National Reconciliation Committee of the All Progressives Congress (APC) has assured aggrieved party members of equal opportunity
Sport
Boys not girls more prone to psychological and physical abuse in sport
38 mins ago
Three-quarters of children have faced abuse in sport and boys are more likely to be victims than girls, a study of more than 10,000 individuals
World
South Africa 'punished' for detecting Omicron Covid variant
46 mins ago
South Africa complained Saturday that it is being "punished" for detecting a new Covid-19 variant Omicron which the World Health Organization has termed a "variant of concern"
Nigeria
LASWA begins clearing of water hyacinth on Lagos Waterways
56 mins ago
The Lagos State Waterways Authority (LASWA) has started the annual clearing and removal of water hyacinth across Jetties and terminals
Nigeria
Please release Kanu, Bianca Ojukwu begs Buhari
1 hour ago
Bianca Ojukwu, has pleaded with President Muhammadu Buhari to release Nnamdi Kanu, leader of the proscribed Indigenous People of Biafra (IPOB).

Sport
Boys not girls more prone to psychological and physical abuse in sport
38 mins ago
Three-quarters of children have faced abuse in sport and boys are more likely to be victims than girls, a study of more than 10,000 individuals