Upbeat swing for Lagos at 50 outing 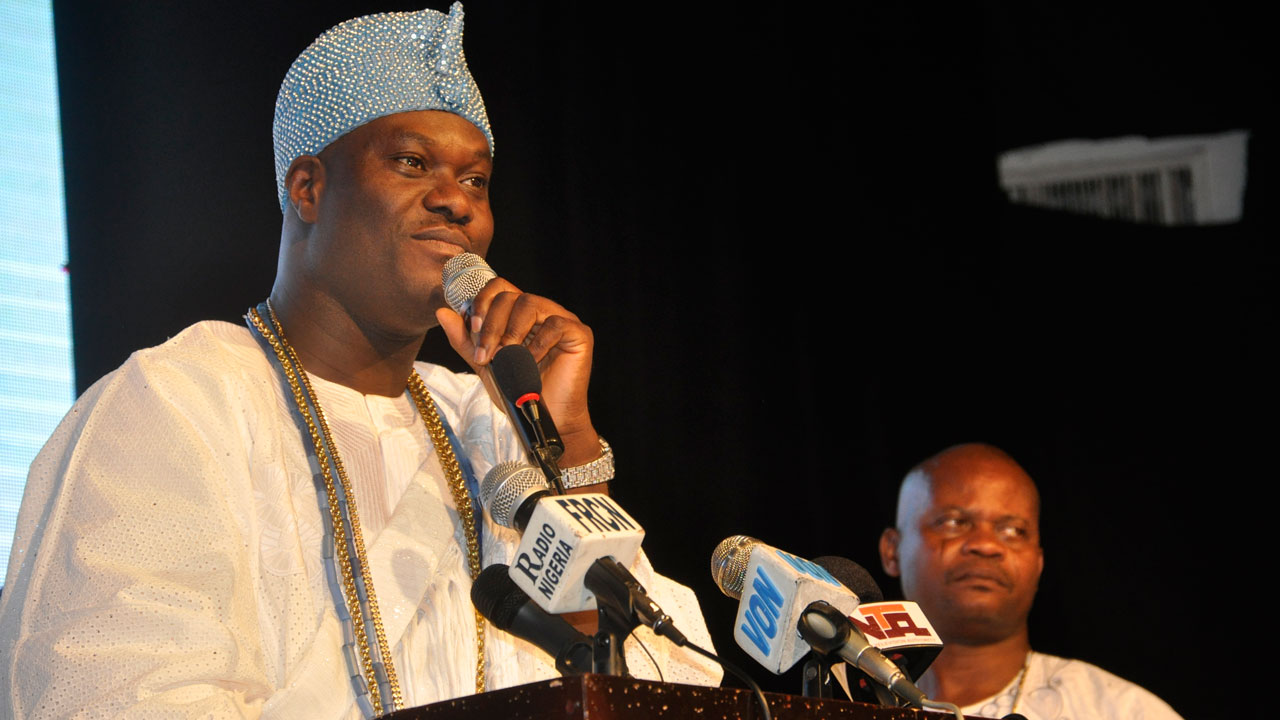 Oba Ogunwusi… making his presentation at the event 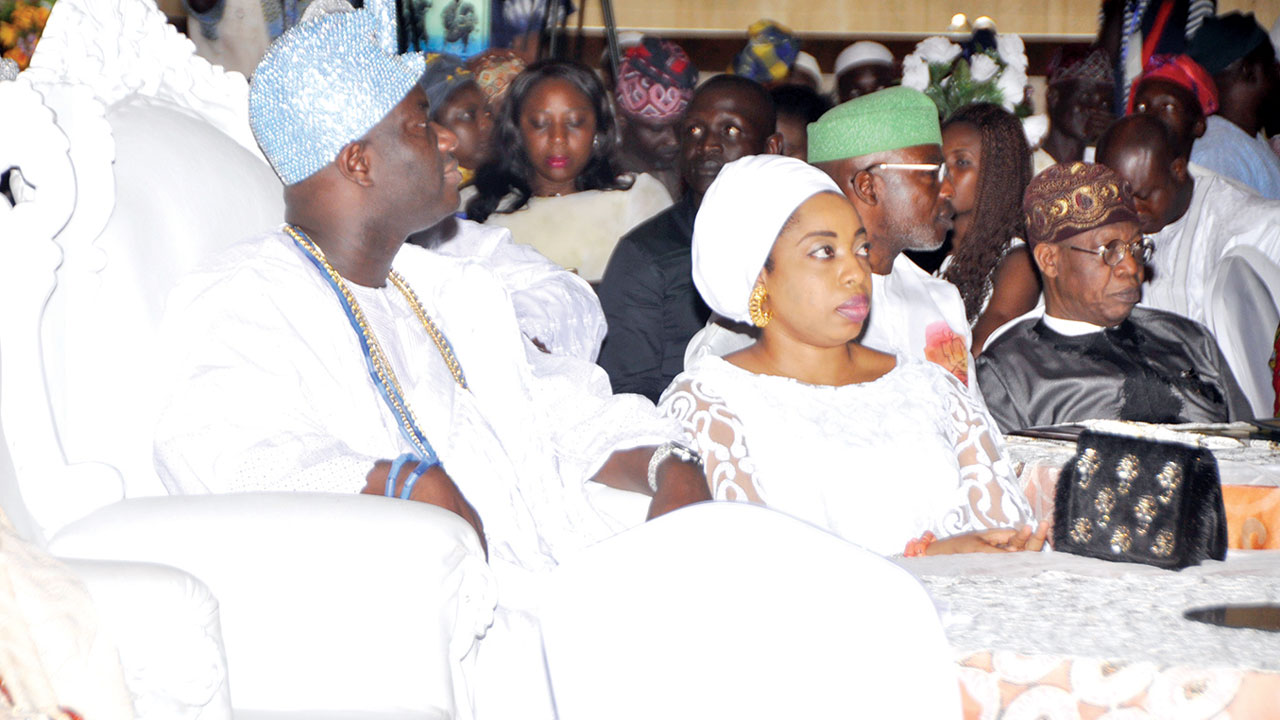 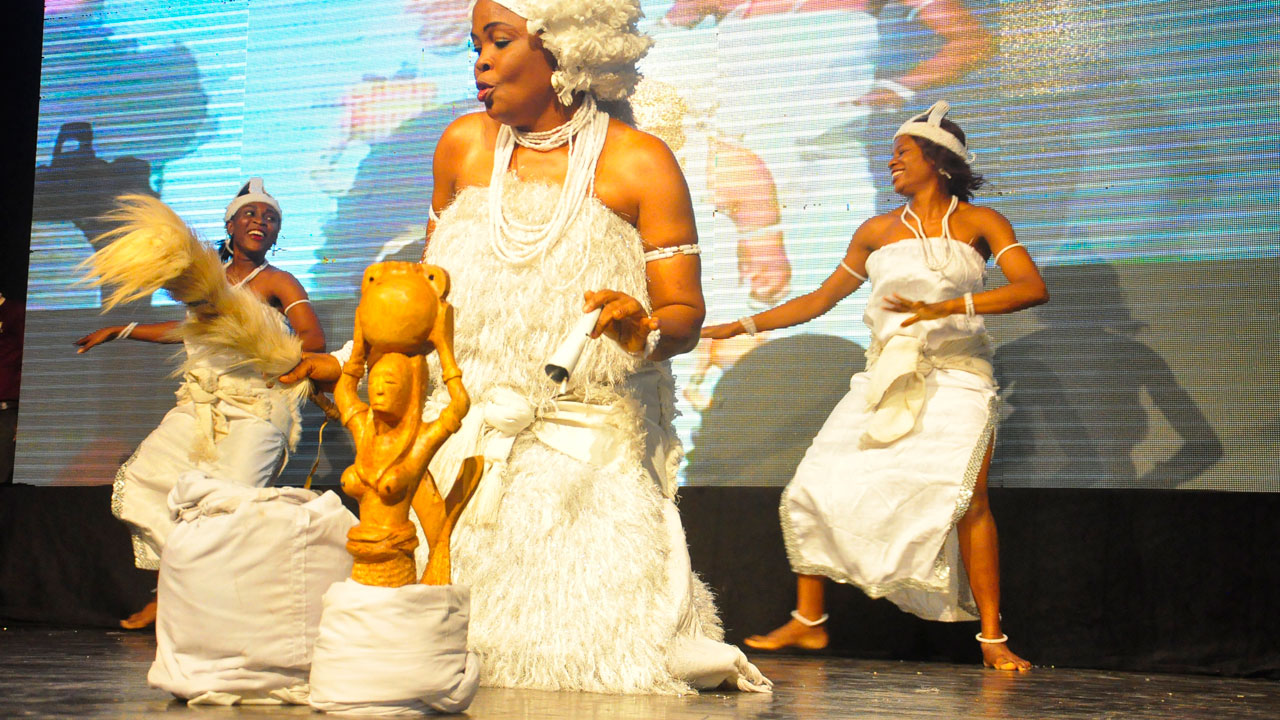 Really, pre-Lagos at 50 anniversary’s package is gathering momentum. With each passing event, the stake is getting higher, reflected in the enriched offering, quality attendance, and large turnout. The third festival colloquium held on Saturday, August 20, 2016 at Shell Hall, MUSON Centre, Onikan, Lagos attested to this.

Featuring His Imperial Majesty, Ooni of Ife, Oba Adeyeye Enitan Ogunwusi as guest speaker, the event attracted dignitaries from all walks of life, including traditional rulers, arts and culture workers and administrators, government functionaries at state and federal levels, politicians, leaders of corporate world, tourism promoters among others. In term of quality and size of attendance, the third colloquium scored high point.

Speaking on Tourism Potential in Yorubaland: Landmarks, Culture and History, Oba Ogunwusi underscored the need to promote and preserve the Yoruba culture for the benefit of upcoming generations. According to the monarch, the greatest thing binding the people together is culture. He therefore urged the Yoruba to preserve their culture so that it can be transferred to the next generation.

While acknowledging the cosmopolitan character of Lagos as a city, Ooni of Ife said all tribes in Nigeria live in Lagos because “Yoruba forefathers wanted them to cohabit in peace and harmony.” Describing Lagos as the greatest city in the world, the monarch singled out the accommodating virtue of most Lagosians.

He stressed the nexus between culture, tourism and heritage and canvassed the need for these to be harnessed for overall growth of the nation.

He clarified certain misconception that wearing white traditional attire is fetish, stating that it is done to promote Yoruba culture and show reverence to God.

Although the programme commenced more than one hour behind schedule, the vacuum was filled with cultural displays by performing groups, including Agasa/Alagbe; Sato drummers (from Akarakuno); and Kumbutu (from Iba).

The arrival of Ooni of Ife with the Olori (Queen) Wuraola Ogunwusi and the large entourage marked the official take-off of the colloquium and for more than 45 minutes, the stage was busy with variety of performances in honour of the Imperial Majesty. The chief of the presentations was the dance drama entitled Iba, a homage to gods of Yoruba land of which the Ooni is the source and custodian.

The National Troupe of Nigeria (NTN) staged the dance drama, which was created by Prof. Ahmed Yerima and choreographed by Arnold Udoka.

The troupe later returned to stage with Olokun Dance that celebrated the uniqueness of Yemoja, the goddess of river. Theatrical offerings also came from Footprints of David, as well as Zangbeto Masquerade from Ajido. It was a total package all in the spirit of felicitating with the Centre of Excellence in its moment of golden anniversary, which is now eight months away.

Commenting on the show, the Artistic Director of the National Troupe, Dr. Akin Adejuwon, in a brief interaction with journalists said: “Today’s performance is in continuation of National Troupe’s interface with the celebration of Lagos State at 50. Part of our performances today, we rendered an Iba, which is a celebration and paying obeisance to the place of the Ooni of Ife and the place of the Yoruba in Lagos.

“And as you would recall, we started the process on May 27, when this celebration of Lagos at 50 commenced officially. It is a two-pronged interface; one, it is based on the fact that Lagos State is actually the environment which our progenitor, Chief Hubert Ogunde, of blessed memory, started most of his performances. It was based on that recognition of Chief Hubert Ogunde’s work that he was invited, in the wisdom of the government of the day at that time, to start the National Troupe of Nigeria, in a way that it will represent the whole of Nigeria. So, National Troupe of Nigeria finds it a wonderful opportunity that our host state, Lagos State is turning 50, and based on that we have decided to interface with the Lagos at 50 committee headed by Prof. Wole Soyinka, who apart from being my mentor is an icon of the Nigerian theatre.”

In his presentation at the event, the Minister of Information and Culture, Alhaji Lai Mohammed hammered on culture and tourism as keys to address the challenges posed by lean resources and unemployment in the country.

The Minister said, ‘’In this period of tough economic challenges, caused by the steep fall in global oil prices, Nigeria has no choice but to look for other viable means of earning needed resources for developmental purposes and to generate employment for its teeming youths.

‘’In this search for a new economic paradigm, tourism, arts and culture have been identified as the most viable sector of the economy to explore. Culture drives tourism, and both are good for creating jobs, reducing crime and diversifying the economy, three of the cardinal programmes of the Buhari Administration.’’

Alhaji Mohammed said the potentials of the sector in boosting the country’s economy had been attested to by many international agencies, including the British Council whose 2013 report of the Lagos Pilot Study on the ‘Mapping of Nigerian Creative Industries’ revealed that the creative businesses surveyed in the mapping exercise contributed N2,547,300,490.26 during the reference period, with 61 per cent of the total Gross Value Added (GVA) derived from the film industry alone. Fashion and music contributed 26 per cent and 13 per cent respectively.

He also said that with Nigeria being richly endowed with globally-recognized sites and monuments, it is imperative for the country to convert its tourist sites to tourist attraction and bring the culture and tourism sector to the mainstream of the economy.

The Minister said the government is working with the World Tourism Organisation, the UN agency charged with the promotion of responsible, sustainable and universally-accessible tourism, to turn around the fortunes of the sector.

‘’Distinguished ladies and gentlemen, the foundation has been laid and the ground work done. It is time for all states of the Federation to pick up the gauntlet and explore the vast tourism potentials available to us and by so doing, improve our economy and provide employment,’’ he said.

The climax of the occasion was the premiere of the film, Eko: Iwure Olofin (the Blessing of Olofin), which captures the life and times of the founder of Lagos.

The producer, Onifade said that the main reason the film project is embarked upon was to document Yoruba culture and heritage and to tell the story of Lagos in a dramatic form.

He noted that Eko: Iwure Olofin is the first of a trilogy comprising other two, Eko: The Reign of the OBAs (on the life and times of all Lagos Obas); and Eko: Governments in POWER. He explained further that “the first part is to document the history of Lagos through the life and times of Olofin and laying the foundation of Lagos by King Ado. The second part is through the kings that reigned in Lagos. We are talking about the time of King Jafaro to King Dosunmu up till 1861 when the British took over Lagos. The third part is the period of the governors, from William McCoskry up to Governor Akinwunmi Ambode.”

Truly, Eko: Iwure Olofin narrates how a brave Ile-Ife prince left his ancestral home in pursuit of fame, honour and glory. As was the common practice then, Olofin (Yemi Blaq) was told by the diviner Adifala (Peter Fatomilola) to leave Ile-Ife with his wife and follow a calabash on a river journey. He was instructed to settle in the land surrounding the river where the Calabash sank. Olofin proceeded on the journey with his wife, his diviner Awopegba and 32 other retainers. When they got to Ijebu, the calabash stopped; and as they heard sounds of drums and songs they waited to investigate only to meet the Ijebu at a celebration. They were received and they stayed for some time before proceeding on their journey. They got to a place and the calabash sank; they established a settlement and called themselves AWORI.

They settled in Iddo and the land flourished. It was also peaceful. Later, they were joined by other peoples, especially the Bini travelling between Bini and Dahomey. After so many years of peaceful coexistence, a particular woman, Aina Agan (Bukky Wright) – who was wealthy and powerful – had a clash with Olofin and his children. She was accused of witchcraft and all her assets confiscated. She was to be arrested and tried but escaped to Bini. She reported her case to the Oba of Bini who sent a delegation on a fact-finding mission….

Before the light-out to signal the screening of the film, former governor of Cross River state, Donald Duke, as the chairman of the film premiere segment of the programme spoke on how cultural and tourism potentials could be harnessed for national growth.

Nigeria
‘Emulate Abiola, save Nigeria’s democracy’
13 Jun
Yesterday marked the 29th commemoration of Nigeria’s freest and fairest election and fourth celebration of Democracy Day since President Muhammadu Buhari moved it from earlier date of May 29 in honour of the late Moshood Kashimawo Olawale (MKO) Abiola.

Nigeria
'No news story worth the blood of any journalist in Nigeria'
14 Jun
The rampant cases of intimidation, harassment, and assault of journalists in the cause of carrying out investigative and other routine reports are fast reaching their height if not worsened in Nigeria, considering the large population of working journalists who report daily to their beat without safety provisions. Speaking on the significance of investigative journalism and…

Nigeria
Wole Soyinka loses brother Femi
15 Jun
Professor Femi Soyinka, a renowned researcher and former Provost of the College of Health Sciences of Obafemi Awolowo University, Ile-Ife, has died at 85. Femi was the younger brother of Nobel laureate and professor of comparative literature, Professor Wole Soyinka. The family in a statement said he died in the early hours of Tuesday at…

Opinion
Owo Attack: Matters arising
16 Jun
Characteristic of the tradition of the Nigerian government, it has condemned the terror attack on St. Francis Catholic Church, Owo, Ondo State and has made the usual promise to fish out the perpetrators, a promise that has been severally made in the past but had yielded little or nothing, especially in the very recent past.