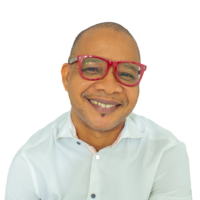 Victor Ehikhamenor is an award winning Nigerian artist, photographer and writer. Ehikhamenor has been prolific in producing abstract, symbolic and politically motivated works with unmistakable ties to his old Benin Kingdom background. His works are influenced by duality of African traditional religion and the interception of Western beliefs,  memories and nostalgia. His symbols and motifs are reminiscent of his childhood village shrines art. As a writer he has published numerous fiction and critical essays with academic journals, mainstream magazines and newspapers round the world including New York Times, BBC, CNN Online, Washington Post, Farafina, AGNI magazine, Wasafiri magazine and others.

Ehikhamenor has designed many newspapers and magazines, he was the creative director of the defunt Next newspaper and one time CEO/Editor-In-Chief of Daily Times Nigeria. He has also designed book covers for award winning authors like Chimamanda Adichie, Helon Habila, Toni Kan, Chika Unigwe, Chude Jideonwo, Lola Shoneyin and many others. And in 2013 he collaborated with the celebrated Nigerian fashion designer Ituen Basi to create the Ekemini collection.
His book EXCUSE ME!, a satirical creative non-fiction view of life as a Nigerian both at home and abroad is a recommended text in two Nigerian universities.

Passport to nowhere
26 Mar 2017  Features
His name, Sunny Deriko; a lanky handsome black boy with a tongue made of razor blade. He had so much flare and was as significant as a radio. He was my elder brother’s friend and he was also responsible...

My mother, my Christmas
18 Dec 2016 4  Features
Growing up, Christmas was one of the most exciting times for me and many other village children. For many, it was the only time of the year they got new clothes ...

The lie detectors that will help fight corruption in Nigeria
27 Nov 2016  Guardian Arts
Recently, the Honourable Minister of Information and Culture, Alhaji Lai Mohammed, declared that a register had been opened to prevent recovered stolen money from being re-stolen.

The trials of a first family
23 Oct 2016 1  Guardian Arts
A very sombre but tense room with a couple sitting far apart from each other in a palace-like setting, surrounded by stern looking elders.

Pounded yam for Okey Ndibe
11 Sep 2016 18  Literature
Let me tell you why I will pound yam for the American based Nigerian novelist and columnist, Okey Ndibe, even though I’ve not pounded yam since General Muhammadu Buhari was a head-of-state.

Training Day!
14 Aug 2016  Guardian Arts
Recently, at the same time pilgrims were buying dollars for ₦197 and I was buying for ₦400, I began feeling like I hadn’t been giving my boy a proper training on the nuances of navigating a noose-tight economy.

Lagos spa has no happy ending or something like that
26 Jun 2016 6  Guardian Arts
One pre-Buhari day a few years ago, I decided to give myself a good treat after a back breaking session preparing for an art exhibition.

A brief history of things forgotten
12 Jun 2016 2  Arts
Good day, brothers and sisters. Please, I need you to give me a minute of your time to share this good message with you. I hope I have gotten your attention? Don’t you just miss the theatrics...