Jollof: Is Nigeria’s claim to supremacy under threat?

“They said I couldn’t, but I fueled my passion with their words.” - Zainab Aliyu - Founder of Aaboux
1 day ago  Personality

In the days of yore, the Nigerian Super Eagles were a national treasure: the players were our go to persons when an aching nation needed to smile and find a common ground to bump fists in bars and, perhaps, forget our off-putting ethnic-based mutual suspicions.

But as soon as the Eagles fell off that pedestal, we [a people reputed to be one of the happiest bunches in the world] found a way to elevate Jollof to that position. And like we did with the Super Eagles, we have established refreshing rivalries with our African neighbours – Kenya, Ghana, Senegal etc. – about whose brand of Jollof is the best. With a huge army of social media e-warriors [which at one point was supported by Acting President Yemi Osinbajo and information minister Lai Mohammed], our integrity and position as the leading producer of the best Jollof are largely intact.

But those are under a huge THREAT, and not from the above-mentioned countries. The aggression is internal. Rising inflation is making the preparation of a decent meal of Jollof for a family of five more arduous than fighting off an invading army of e-soldiers from Ghana.

According to a report published by SBM Intelligence, a private intelligence outfit which provides analysis of the Nigerian socio-political and economic situation, the national price of cooking an average pot of Jollof rose marginally to ₦5,674 in the month of May in line with an upward trend in these prices that dates to the second half of 2016, despite a slight dip in March 2017 to ₦5,266 from ₦5,388 in February 2017. 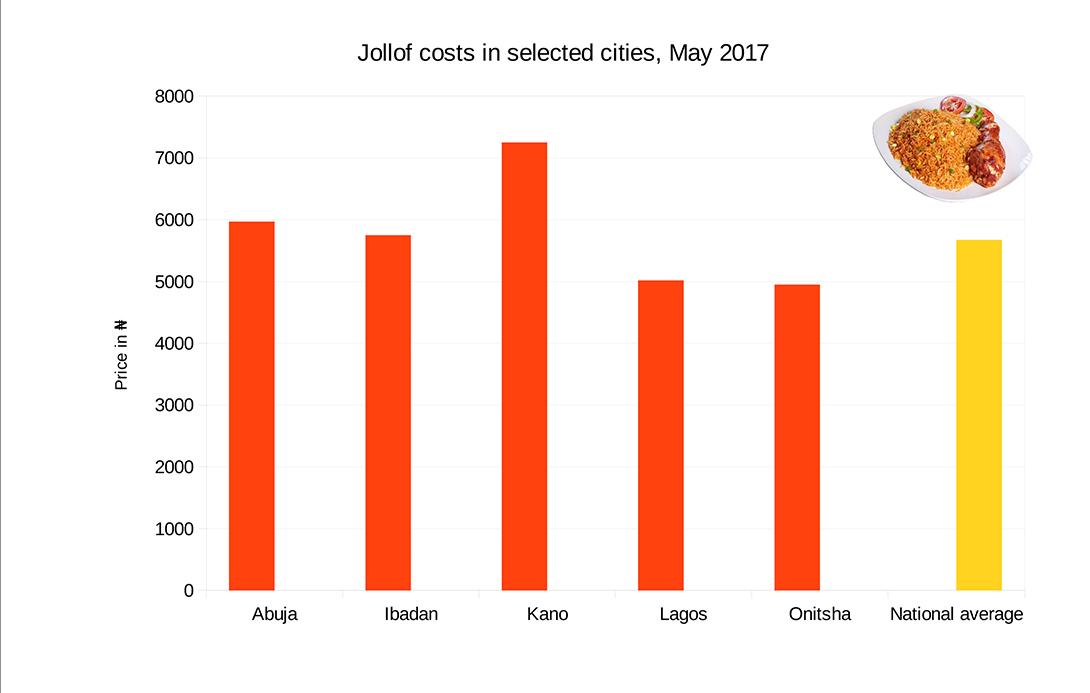 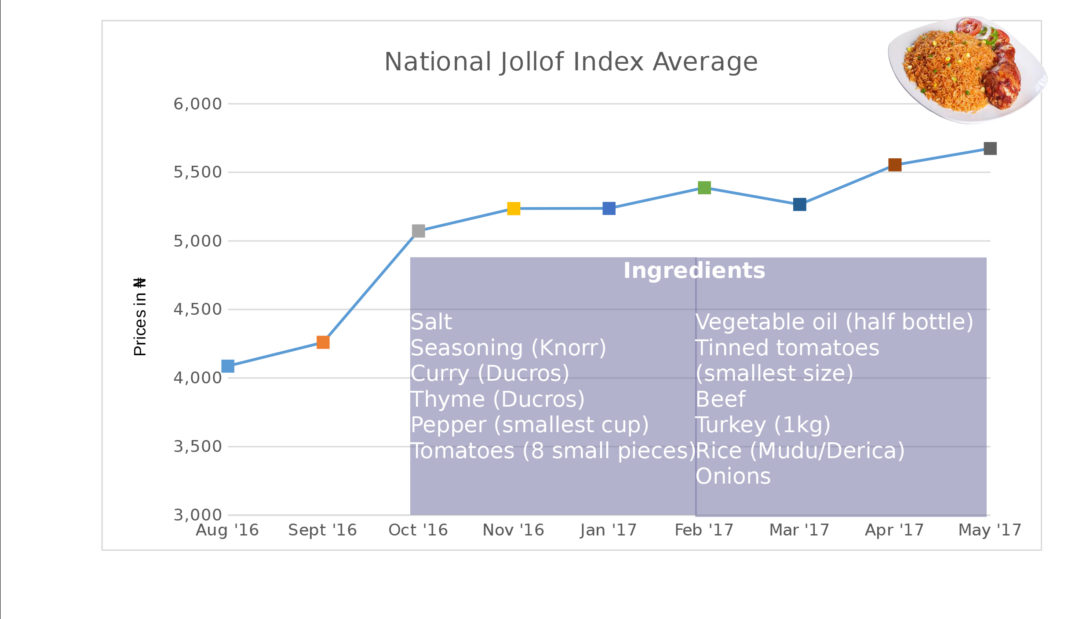 But if you are quick to jump up and say, “Jollof is a national treasure that should be protected from all forms of aggression,” it is worth thinking about how many families that could afford to spend that much on a meal. While you are at it, consider the fact that a 2016 United Nations report put Nigeria’s poverty rate at 62.6 per cent with Human Development Index (HDI) of 0.47. Our fiercest Jollof rival Ghana has 28.6 per cent poverty rate and HDI of 0.558 while Kenya’s stands at 45.5 percent for poverty rate and 0.54 HDI.

More worrisome is the fact that it is more expensive to prepare Jollof in Kano than in Lagos. SBM Intelligence says in its report that you will have to shell out at least ₦7,250 in Kano [as at June 16, 2017] while you only need ₦5,070 in Lagos. Take note that United Nations’ Global Multidimensional Poverty Index of 2015 puts poverty rate in Kano at 76.4 per cent and that of Lagos at 8.5 per cent.

Yes, you can argue for the possibility of preparing Jollof for the same number of persons mentioned in SMB report for far less but the truth is that it is not Jollof that is at risk; we are the ones threatened by rising prices of food items and a cost of living that is intent on spiralling out of control. And we need more than the famed Nigerian Spirit that saw us through the trying times we endured watching the Super Eagles fall from grace to beat down the ugly trend.

This time, the government would need more than mere slogans to salvage the situation. SBM Intelligence’s recommendation is clear in this regard. “Policy makers will, however, need to act fast as they have a critical role in curtailing the ongoing, albeit slower rise in consumer commodities,” it says. If this is not done, our standing army of e-soldiers that have defended our claim to Jollof supremacy against the Ghanaians and Kenyans will be left grossly depleted.

Are we ready to relinquish that position?