Why price of maize keeps rising
16 hours ago  Features 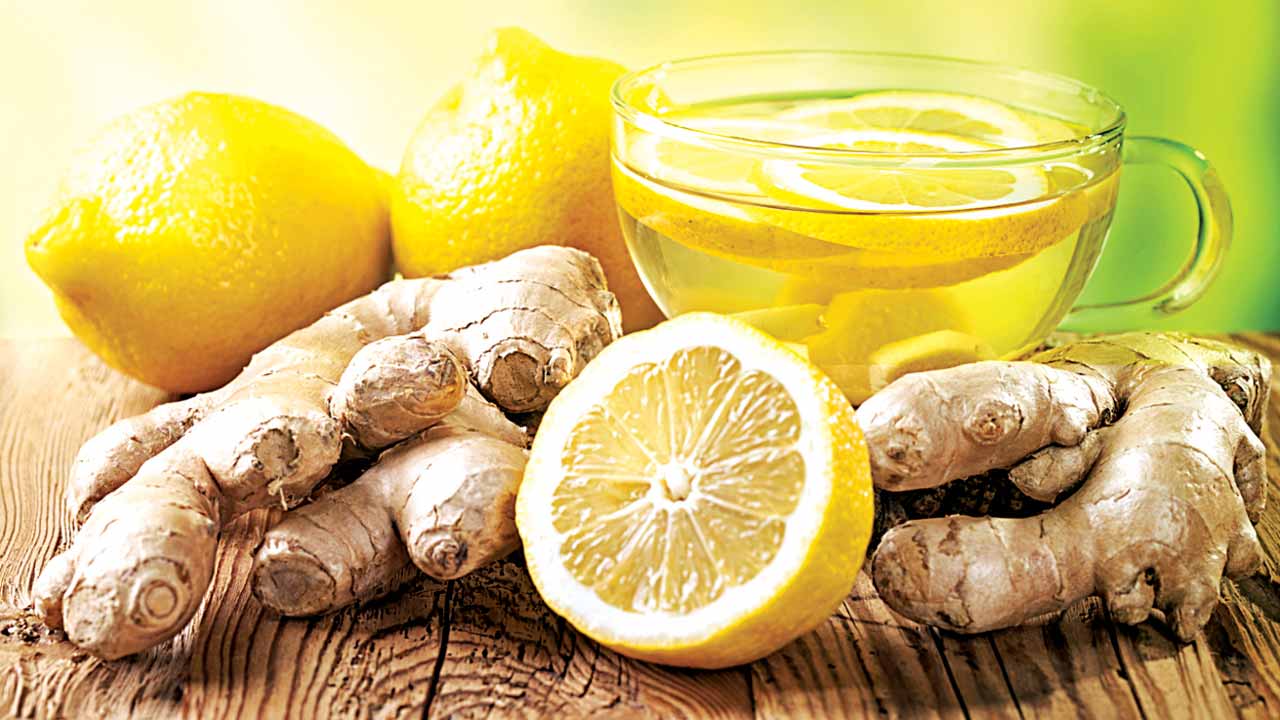 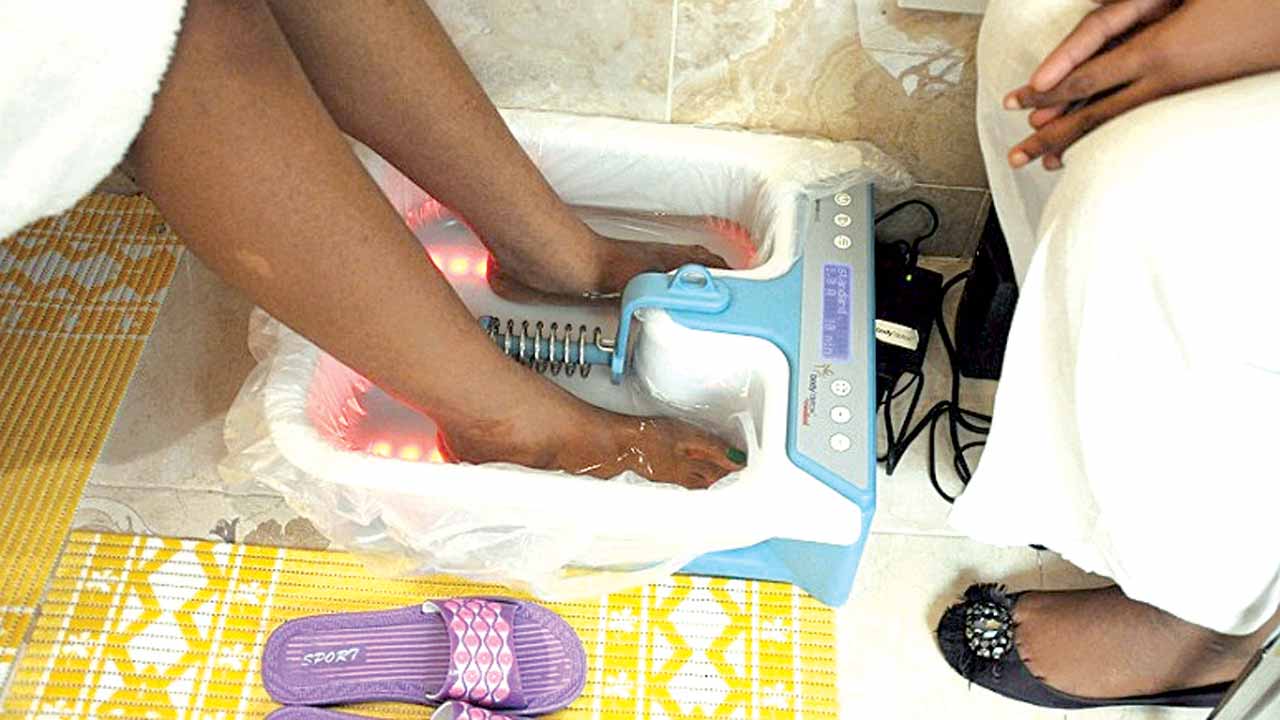 Electrolysis Foot Bath… It is an innovative method of helping the body eliminate unhealthy acids, heavy metals, toxins and pollutants from the various organs like kidneys, liver, pancreas and gall bladder through the foot by electrolysis (Exchange of ions in the foot). This is effected by ionizing the water in the foot bath. PHOTO CREDIT: https://www.bellanaija.com/wp-content/uploads/2012/10/Mart-Life-Detox-Clinic1.jpg

The Yuletide is over. But the damage done to the body by over indulgence in ‘bad’ diets and alcohol- that is weight gain, raised blood pressure, sugar and cholesterol- lingers.

However, medical experts say the body could be cleansed from these unwanted additions by novel detox therapies including regulated fasting and exercises, and herbal preparations.

They said supervised and regulated medical detoxification with herbal teas, bitter kola, fresh fruits and vegetables and ‘fasting’ are effective and safe to achieving success.

They, however, said it is critical to see a practitioner who understands detoxification as a way of helping the body heal, regenerate, and repair.

According to Wikipedia, detoxification (sometimes called body cleansing) is a type of alternative medicine treatment which aims to rid the body of unspecified “toxins” – accumulated substances that proponents claim have undesirable short-term or long-term effects on individual health. Activities commonly associated with detoxification include dieting, fasting, consuming exclusively or avoiding specific foods (such as fats, carbohydrates, fruits, vegetables, juices, herbs, or water), colon cleansing, chelation therapy, and the removal of dental fillings.

A fertility expert, joint pioneer of In Vitro Fertilisation (IVF)/Test Tube Baby in Nigeria and Medical Director Medical Art Centre (MART) Group of Health Services and MART Life Detox Clinic, Prof. Oladapo Ashiru, told The Guardian: “These chemicals are simply not going to go away, but we must fight them and eliminate them from our system through the process of detoxification, based on the modern Mayr medicine, which has been in existence for about 100 years now.”

Ashiru, a professor of reproductive endocrinology who pioneered IVF in Black Africa in conjunction with Prof. Osato Giwa-Osagie, said that in his over 30 years of practice, he has discovered that many cases of infertility are due to the accumulated toxins in the body which, if not eliminated, may prevent a couple trying for child from achieving their goal.

“Modern Mayr medicine (established by an Austrian Physician Dr. Franz Xaver Mayr over 100 years ago) is a combination of different holistic health concepts whose objective is to successfully guide people to lasting health and enhanced performance over the long term,” Ashiru said.

What then does detoxification do in the life of anyone? “Many things. To start with, detoxification aims at removing harmful substances from the human body through a combination of holistic health concepts,” Ashiru said.

He added: “These have been recognized by American College of Obstetrics and Gynaecology, by the American Society for Reproductive Medicine that there are toxins around and especially a woman that wants to have baby should not eat large fish or stock fish because they contain mercury, which can prevent conception and other toxins that can have consequences even on the baby yet unborn.”

Ashiru has undergone training in the Modern Mayr Medicine and is board-certified in Austria and is the author of Want a Baby, a book on the causes, management and treatment of infertility.

Mayr Therapy is based upon the oldest cleansing method known to mankind.

He said the MART Life Detox Centre was set up to address these issues, to remove toxins either from bad eating or from eating toxic foods or toxins that are available in the environment, which people have no control over such as pesticides, insecticides, oil fossils, diesels and so much more of such toxins. “So when people now go through these, they now go for their fertility treatment and it increases their success of fertility,” he said.

A Mayr nutritionist and Managing Director of Martlife Detox Clinic, Mrs. Idowu Ashiru, told The Guardian that detoxification is key to looking younger and healthier even in old age. “Do you want to be attractive, beautiful, young and healthy in your 60s? You may have to go for regular detoxification with fasting, drinking vegetable broth and increasing your physical activity.”

Idowu said: “The secret is the Detox Clinic. When you remove all the toxins from your body, then all your face and body becomes fresh and vibrant.”

Why detoxify? A professor of pharmacognosy and Chief Executive of Bioresources Conservation and Development Group (BCDG), Prof. Maurice Iwu, told The Guardian said: “The whole idea of detoxification from the colonic point of view is that you would be able to wash out and clean your system so that you do not have remnant of foods you took years ago, particularly meat and stuffs like that, and they keep accumulating and they putrefy and poison your system. It is that putrefaction and poisoning. It is just like deliberately taking chemicals that are harmful to you.”

Iwu said another reason why detoxification becomes very useful is that there is a lot mechanic chemicals that enter the system and they can not be avoided, like a construction and wielding sites, a lot of things enter the body. “They cannot be avoided in a modern society, so the need to have a system that removes them from the body, so that is why the formulation of detoxification that we have that is the IHP Detox,” he said.

“IHP Detox tea is a unique blend of seed and leafs which are rich in flavonoids, polyphenols, and diterpenoid lactones which are responsible for the activities; general body cleansing, detoxifier, enhance immunity and other health benefits,” he said.

The pharmacognocist explained: “The tea has this ability to not only stiff your tummy of these things but also would be able to remove heavy metals from your system. That is why the detox becomes very important and ours is not just taking laxative, but we deliberately formulated something that will take care of all these toxins in the body and then be able to renew the body…”

According to the pharmacognocist, IHP Detox Tea is a distinctive combination of Andrographis paniculata, Garcinia kola (bitter kola) seed powder and Psidium guajava (guava) leaf powder, which are rich in flavonoids, polyphenols, and triterpenoid lactones which are responsible for the activities; general body cleansing, detoxifier, enhance immunity and other health benefits.

He explained: “IHP Detox Tea is a special blend of bitter kola, Andrographis and guava leaves that helps the body to detoxify itself and remove environmental pollutants from the system.

“Another major function of IHP Detox Tea is the reduction of oxidative stress, which determines the redox status and hepatocyte viability in the face of disease. Diseased or damaged livers are more sensitive to additional oxidative stress caused by drugs, even at doses that would normally be safe. Research has established that targeting of antioxidant pathways in liver may have therapeutic benefit, such as the application of antioxidant supplementation as a chemoprevention tool… Several studies have shown that Kolaviron (a component of IHP Detox Tea) blocks the deleterious effects of several toxins. The ten days regime should be followed with colon cleansing with Phytolax and/ or Moringa seeds.”

Iwu said Phytolax Tea, used for constipation relief, is a proprietary mixture of Cassia podicarpa and Pinnesetum purpurem powdered leaves in a tea bag to provide a refreshing high quality tea for optimum health and wellness.

IHP Phytolax tea, he said, is formulated to provide a complete detoxification of the liver, colon, kidneys and lymphatic system for a healthier lifestyle. “It improves circulation of bile and relieve from constipation,” Iwu said.

Meanwhile, Sudanese researchers have shown that Date palms or rather Dates are one of the most commonly fruits used for treatment of liver diseases including alcoholic liver diseases.

According to the study published last year in Sudanese Journal of Public Health, Date palm (Pheonix dactlylifera) fruit is an important component of the diet in most of the hot arid and semi arid regions of the world, it contain carbohydrates, fats, proteins, fibers, minerals and vitamins.

The benefits of going for a run to alleviate stress after a tough day in the office are well known. But a new study has found out why working up a sweat is so relaxing and mood-boosting. Exercise actually detoxes harmful chemicals from the body and can alleviate depression.

Researchers at the Karolinska Institute in Sweden have discovered that physical activity purges the blood of a substance, which accumulates during stress and can be harmful to the brain.

The study was published in the journal Cell.

However, the concept of detoxification has received criticism from scientists and health organizations for its unsound scientific basis and lack of evidence for the claims they make. According to Wikipedia, the “toxins” usually remain undefined, with little to no evidence of toxic accumulation in the patient. The British organisation Sense About Science has described some detox diets and commercial products as “a waste of time and money”, while the British Dietetic Association called the idea “nonsense” and a “marketing myth”.

Detox diets are dietary plans that claim to have detoxifying effects. The general idea suggests that most food contains contaminants: ingredients deemed unnecessary for human life, such as flavour enhancers, food colorings, pesticides, and preservatives. Scientists, dietitians, and doctors, while generally viewing “detox diets” as harmless (unless nutritional deficiency results), often dispute the value and need of “detox diets”, due to lack of supporting factual evidence or coherent rationale. In cases where a person suffers from a disease, belief in the efficacy of a detox diet can result in delay or failure to seek effective treatment.

Detox diets can involve consuming extremely limited sets of foods (only water or juice, for example, a form of fasting known as juice fasting), eliminating certain foods (such as fats) from the diet, or eliminating processed foods and alleged irritants. Detox diets are often high in fiber. Proponents claim that this causes the body to burn accumulated stored fats, releasing fat-stored “toxins” into the blood, which can then be eliminated through the blood, skin, urine, faeces and breath. Proponents claim that things such as an altered body-odour support the notion that detox diets have an effect. The mainstream medical view is that the body has mechanisms to rid itself of toxins, and a healthy diet is best for the body. Although a brief fast of a single day is unlikely to cause harm, prolonged fasting (as recommended by certain detox diets) can have dangerous health consequences or can even be fatal.

Certain devices are promoted to allegedly remove toxins from the body. One version involves a foot-bath using a mild electric current, while another involves small adhesive pads applied to the skin (usually the foot). In both cases, the production of an alleged brown “toxin” appears after a brief delay. In the case of the foot bath, the “toxin” is actually small amounts of rusted iron leaching from the electrodes.