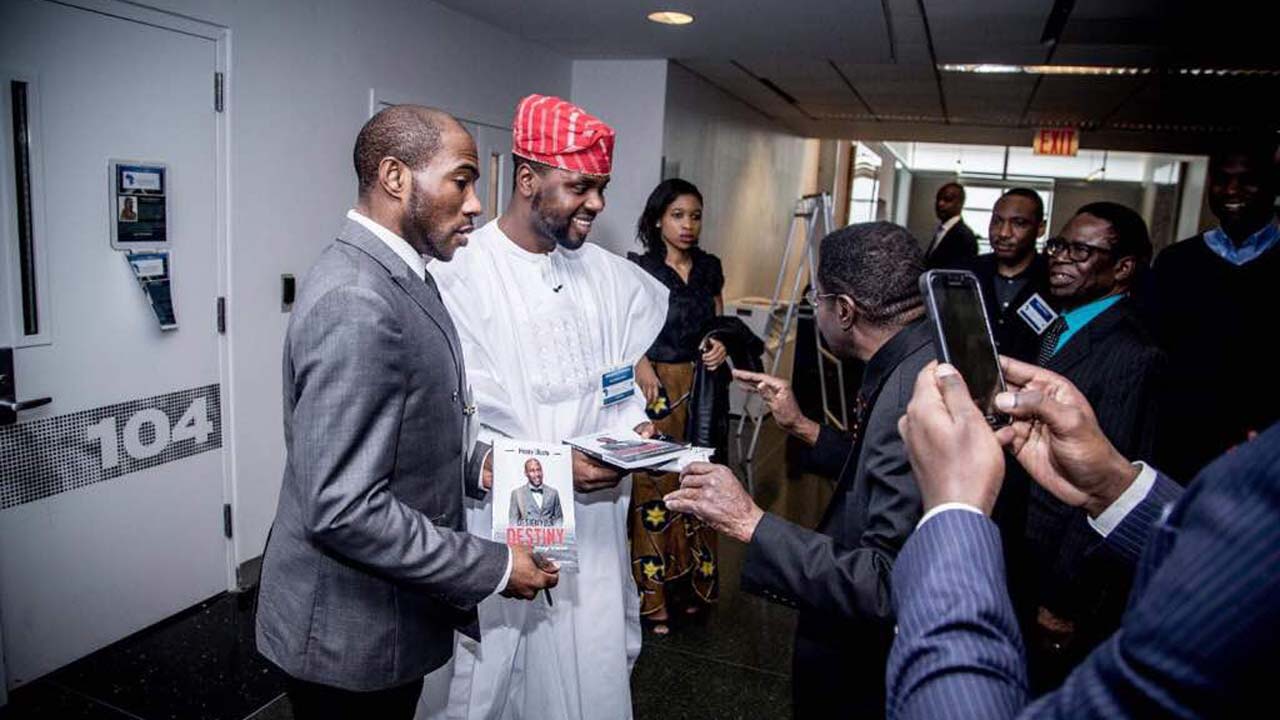 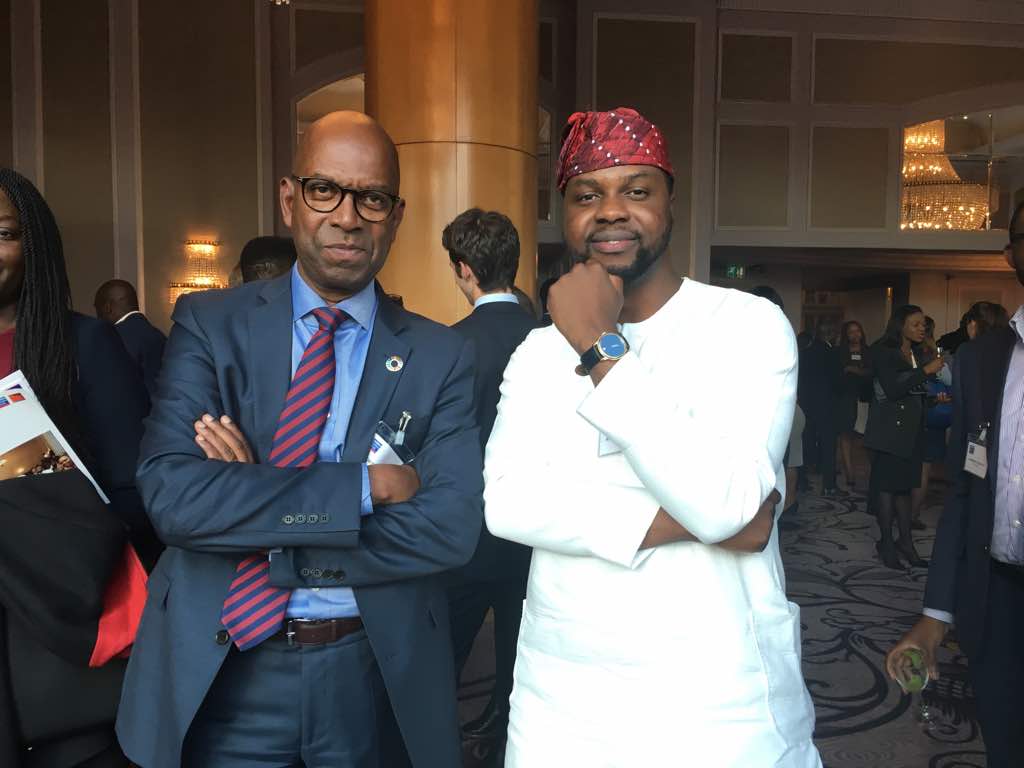 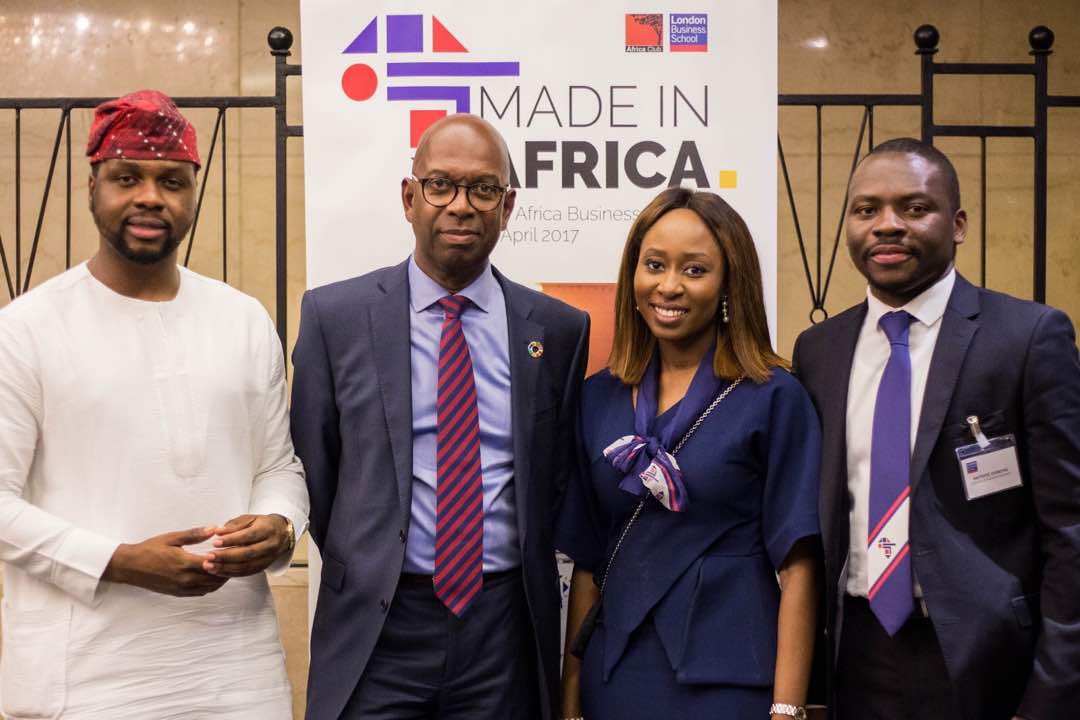 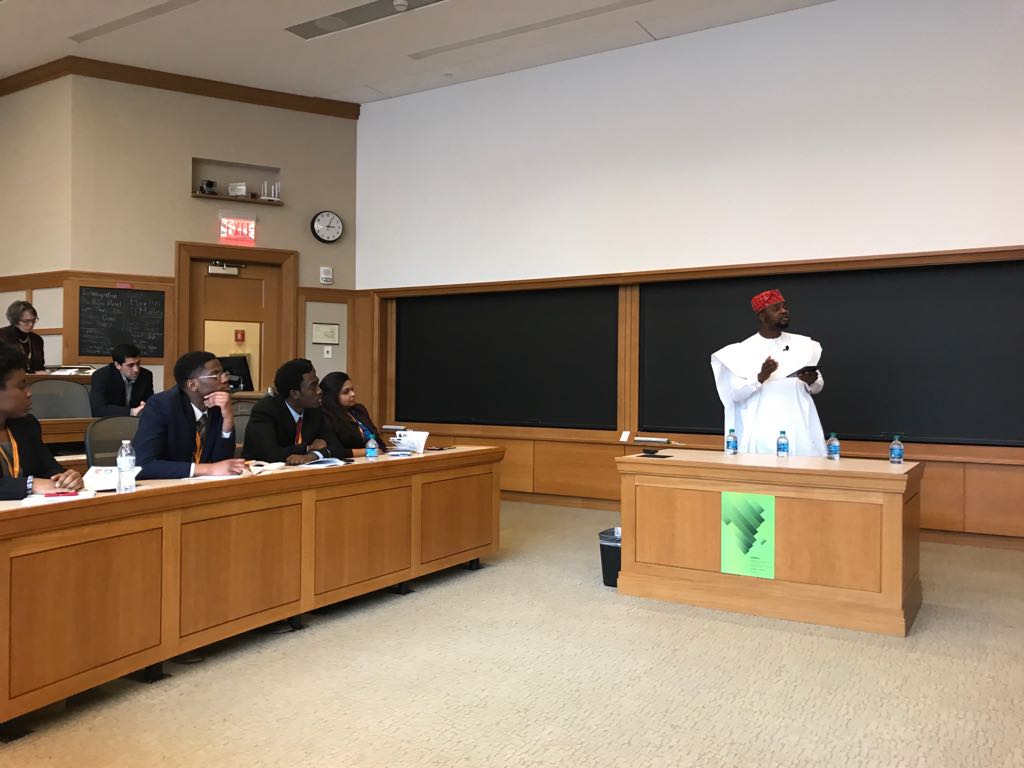 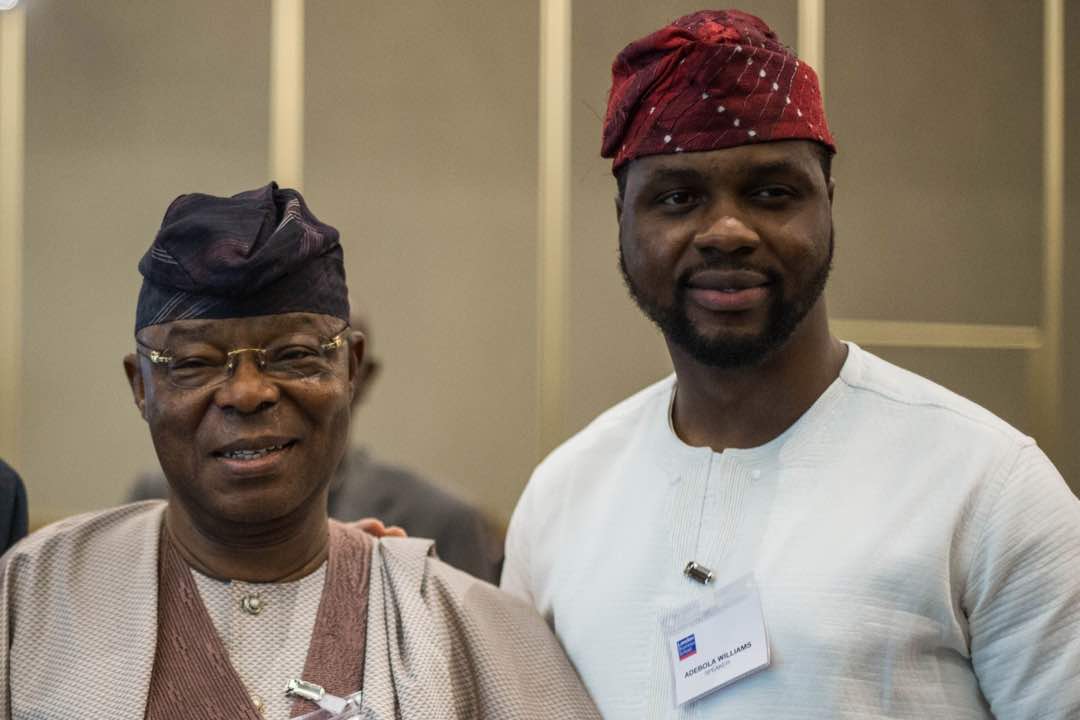 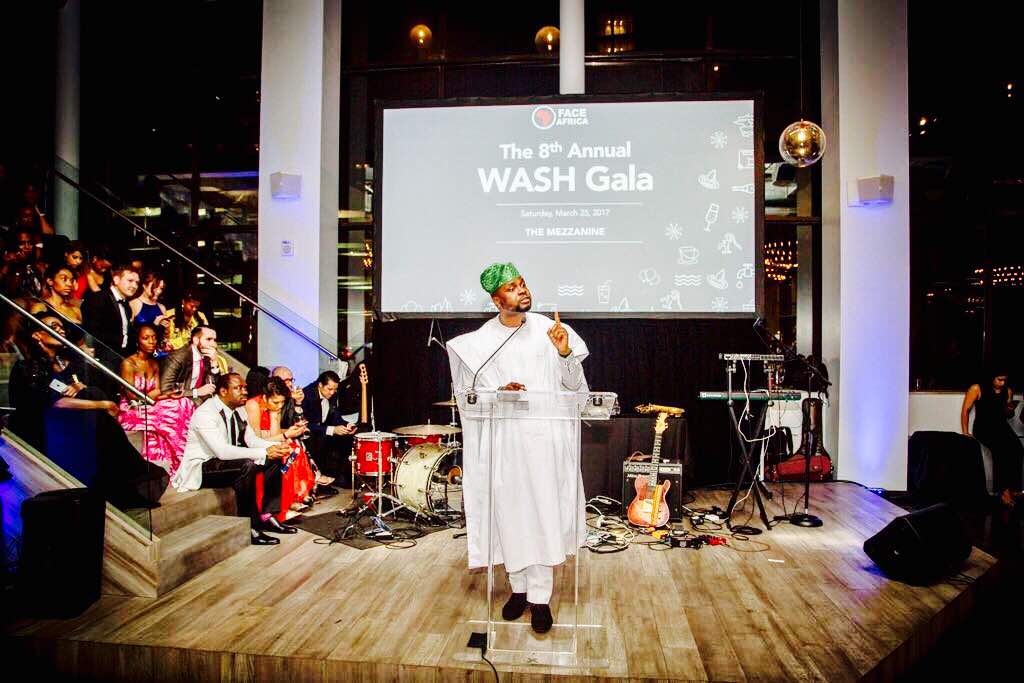 * Speaks at Oxford, Columbia, Harvard and Yale
Co-founder of media group, RED and chief executive officer of its companies Red Media Africa and StateCraft Inc., Adebola Williams, this week, rounds up his international tour, where he has taken an urgent message of ‘The business of nation-building’, sharing specifically the lessons learnt from the work of StateCraft Inc. in African national elections, and the impact of The Future Awards Africa across 14 African nations.

His latest event was London Business School Africa Business Summit, where he spoke on Saturday, April 22, 2017 about entrepreneurship, and creating opportunities and solutions that meet Africa’s most pressing needs.

Before this, Adebola had spoken at the Said Business School, Oxford on 11 April; Harvard University, Boston on April 1; and delivered Keynote Addresses at the Face Africa Wash Gala, New York on March 25 and Columbia University, New York on April 1.

“Critical tensions are best,” he said at Harvard. “They present the best opportunities. Ideas born to solve problems have higher chances to succeed. And that’s the model we’ve always adopted for all our work. So when we came up with The Future Awards Africa, it was at a time when Nigeria’s youth mirrored a discontent across the continent that led to loss of hope and identity. The awards created a massive pop culture platform that revived the hope of Africa’s citizens and built an inspiring new narrative of young leaders.

“There are too many problems in countries in Africa for anyone to be waiting for someone to describe the opportunities that exist at home. The country you are in was built by people who reached into their soul, responded to the call of necessity and invented the future.”

His tour continues this week. He is a guest at Yale University’s Jackson Institute for Global Affairs on Wednesday, 26 April where he will be speaking about nation building and Africa’s electoral future.

“A political communications company that has worked on 3 ground breaking presidential campaigns as a communications strategist including President Buhari’s 2015 campaign in Nigeria and President Akufo-Addo in Ghana, which successfully defeated heavily favoured incumbent presidents,” the Institute notes. “Adebola is behind numerous African presidents’ successful election campaigns. He is revolutionizing campaigning in Africa and he will share a wealth of knowledge with us over what promises to be an informative and entertaining evening. Eddie Mandhry, who leads Yale’s Africa Initiative, will moderate the discussion. Students will have an opportunity to engage with Adebola throughout and learn from his vast experience.”

Williams will end this phase of his tour with a panel at the University of Chicago Booth School of Business’ Emerging Markets Summit on April 29, 2017.

Recently selected for President Obama’s Mandela Washington fellow and featured on Forbes Magazine as the man who helped three presidents win elections consecutively in Africa, Adebola is redefining public relations and marketing in the digital age as well as strong political engagement on the African continent. He has been in the field of public communication management for over a decade as well as Youth development, co-founding REDStrat in 2005—a company that would eventually become the influential Red Media Africa where he is CEO.

He and his partner then went on to build the RED Group, home of several well-known brands including The Future Awards Africa, YNaija.com, StatecraftInc, amongst others. RED’s impressive client list over the years includes the World Bank, the Africa Union, the Nigerian Presidency, the British Council, Nigeria LNG and on a streak of wins recently acquired Union Bank, Facebook, Uber, Intel, amongst others.

Named CNBC Young Business Leader of the year, Forbes 30 Under 30, Businessday 40 Under 40, amongst others. Adebola is passionate about social re-engineering and co-founded EnoughisEnough (EiE), one of Nigeria’s foremost civic participation group and premium voice for young people on politics. He was Chairman of the Board until resigning to take the lead on the communication and rebranding of the current President of the Federal Republic of Nigeria, President Muhammadu Buhari as CEO of StateCraftInc. Adebola and his team helped to reshape the national discourse, and optimise media engagement that helped change longstanding perceptions and ushered in a new president. He has recently done the same in Ghana helping the opposition candidate win the presidency on his third attempt. StateCraftInc, an organization focused on delivering engaging political campaigns in the global political space.

Nigeria
NDLEA bursts trans-border cartel, arrests 5 kingpins, seizes skunk, meth in compressors
16 mins ago
Operatives of the National Drug Law Enforcement Agency, (NDLEA), have dismantled a trans-border drug cartel and arrested five leaders of the syndicates operating in parts of the world.
Sport
Milan's title defence in tatters after home humbling by Sassuolo
42 mins ago
AC Milan's season went even further off the rails on Sunday after a humiliating 5-2 home defeat at the hands of Sassuolo left them at risk of dropping out of the Champions League places. Everything that could go wrong for troubled Milan did at a gloriously sunny San Siro, with two goals ruled out for…
Nigeria
Umahi lifts embargo on enthronement of traditional rulers in Ebonyi
47 mins ago
Gov David Umahi has lifted embargo on enthronement of traditional rulers in communities across the state.
Nigeria
Container falls off truck in Lagos, crushes 9 passengers to death
1 hour ago
An articulated truck conveying a 20ft container fell on a commercial bus at Ojuelegba, Lagos on Sunday killing nine persons. Dr Olufemi Oke-Osanyintolu, Permanent Secretary, Lagos State Emergency Management Agency (LASEMA) said the truck lost control while ascending a bridge. “Upon arrival at the scene, a truck conveying a 20ft container was found to have…
Guardian Life
Navigating Shark Infested Waters Of Online Dating
1 hour ago
There is a certain reaction people get when they mention that they exist on a couple of online dating sites. It’s that kind of look you give to a potential serial killer, the one who tells you in a moment of unsolicited confidence he enjoys killing cats and dismembering them. Yes, that: The look of…

Brand Intelligence
10 Best Online Casinos in Brazil Where High Rollers Win Huge Prizes
28 Jun 2022
The size of the global online gambling market keeps its dramatic expansion: in 2021, it accounted for 61 billion dollars and by 2028, it is projected to reach enormous 114 billion dollars. One reason for this is the increasing ease of payments: the best online gambling sites now accept a variety of payment methods from…

APO Press Releases
Radisson Hotel Group advances on growth plans as it establishes regional offices across the world
29 Jun 2022
Last year, Radisson Hotel Group (www.RadissonHotelGroup.com) recorded its strongest year of signings ever, and recently announced targets for 2022 (https://bit.ly/3u9E3Dw) to outperform the previous year. The Group also announced its intentions to unleash the power of its diverse brands and partnerships in APAC to drive significant growth across the region by 2025 (https://bit.ly/3OJRcuS).   To…

Nigeria
Senate sends delegation to UK over Ekweremadu
29 Jun 2022
The Senate on Wednesday agreed to send a high-powered delegation of lawmakers to the United Kingdom to see the former Deputy Senate President, Ike Ekweremadu, who is facing an alleged case of an organ harvesting charge in that country. Senate President Ahmad Lawan made the disclosure at plenary after the Upper Chamber emerged from a…