By Shola-Adido Oladotun
Share on Facebook Share on Twitter Share on WhatsApp Share on Telegram
Watch out, world! There is a traditional revolution taking over, and it’s got the words “Agbada” written all over it. Now, in case you are living under a rock and don’t know what an agbada is, let’s give you a quick fashion lesson. Agbada is a traditional flowing wide-sleeve robe worn mostly by Yoruba men…

Watch out, world! There is a traditional revolution taking over, and it’s got the words “Agbada” written all over it. Now, in case you are living under a rock and don’t know what an agbada is, let’s give you a quick fashion lesson.

Agbada is a traditional flowing wide-sleeve robe worn mostly by Yoruba men in the southwestern part of Nigeria.
Although Agbada has been around for a long time, it wasn’t until a certain TV presenter called Ebuka Obi-Uchendu attended a wedding wearing a modernised version of the look by the designer Ugo Monye that the clothing item quickly became a must-have. Since then, Agbada has shifted its narrative from being a piece worn by only rich men to being a go-to outfit for either an owanbe or a photoshoot.

However, as with every great trend, there are some rules you need to follow to properly pull an Agbada off. So, be it a goal to be the next Ebuka or get inducted into the Yoruba demons’ Hall of Fame, here are five things to consider when wearing an agbada.

Never wear sneakers
Sneakers are a big no when selecting footwear to be worn on an Agbada. There is a reason it’s called a traditional outfit, not a semi-traditional or something else. Completely dismiss the idea of wearing those Nike or Gucci sneakers on an agbada because not only does it cheapen the clothing piece look, it screams that you have a low style taste. Rather, opt for a loafer or fancy sandals. 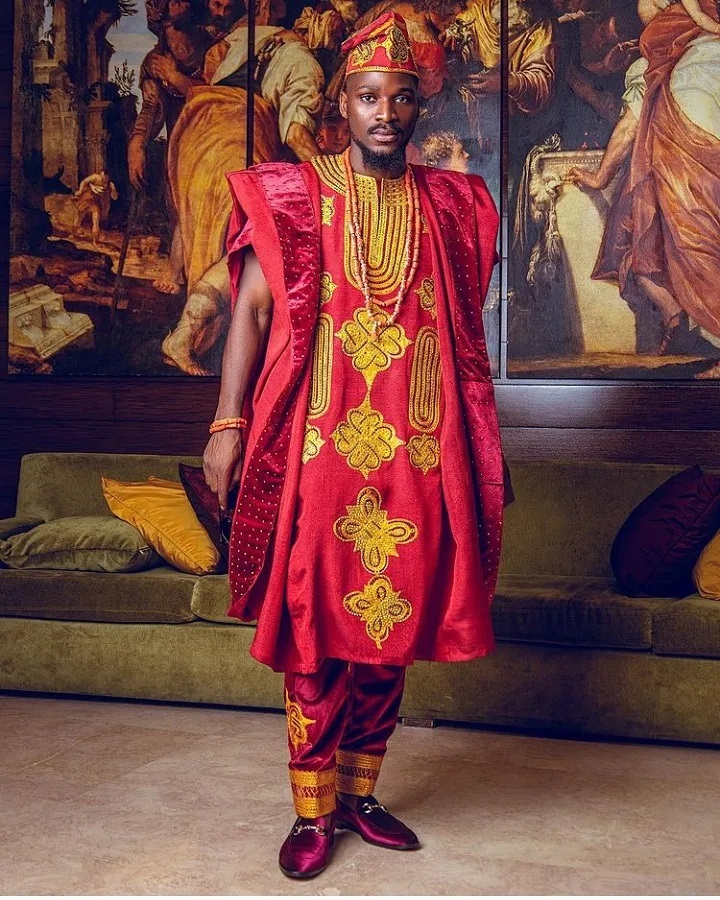 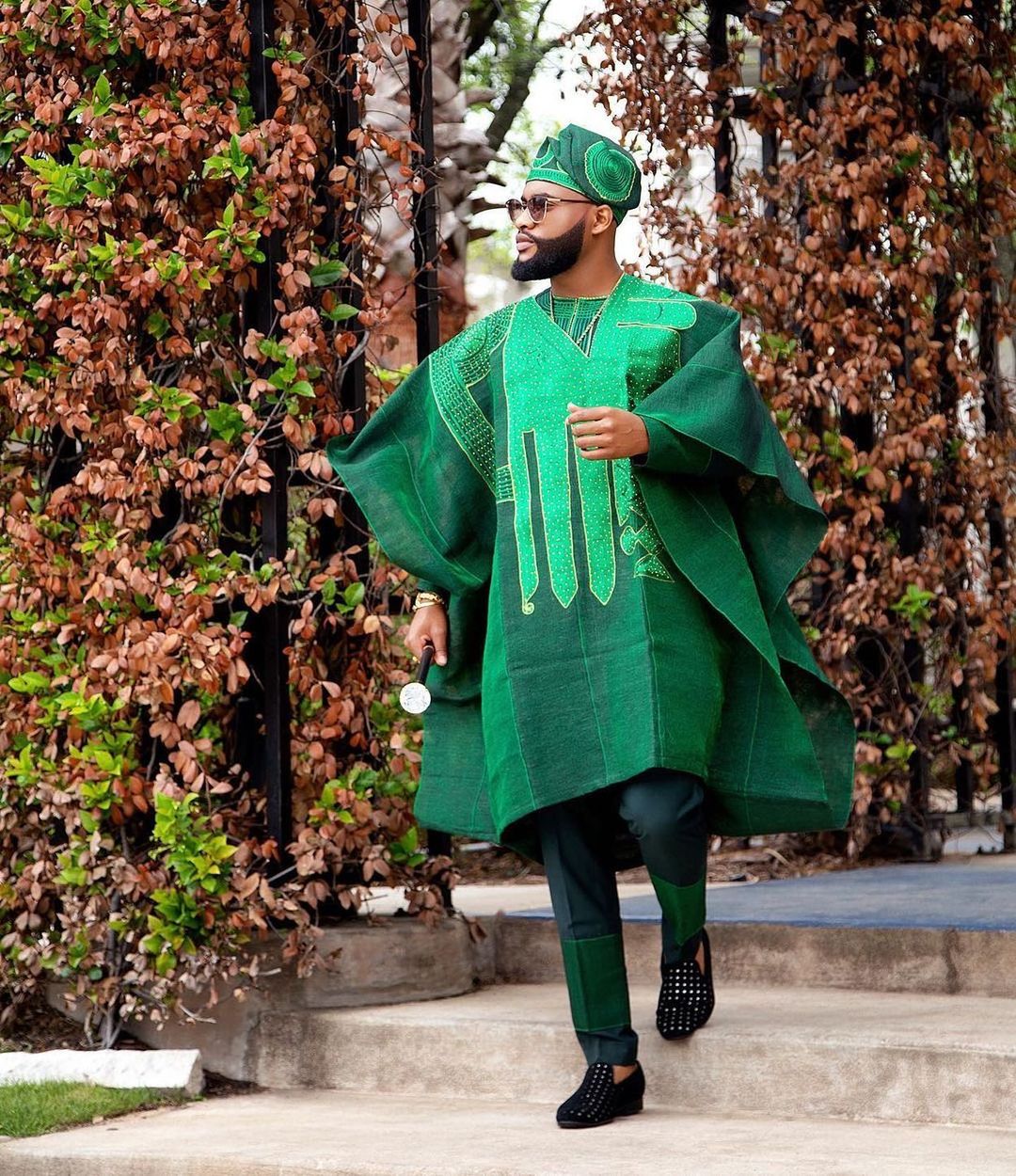 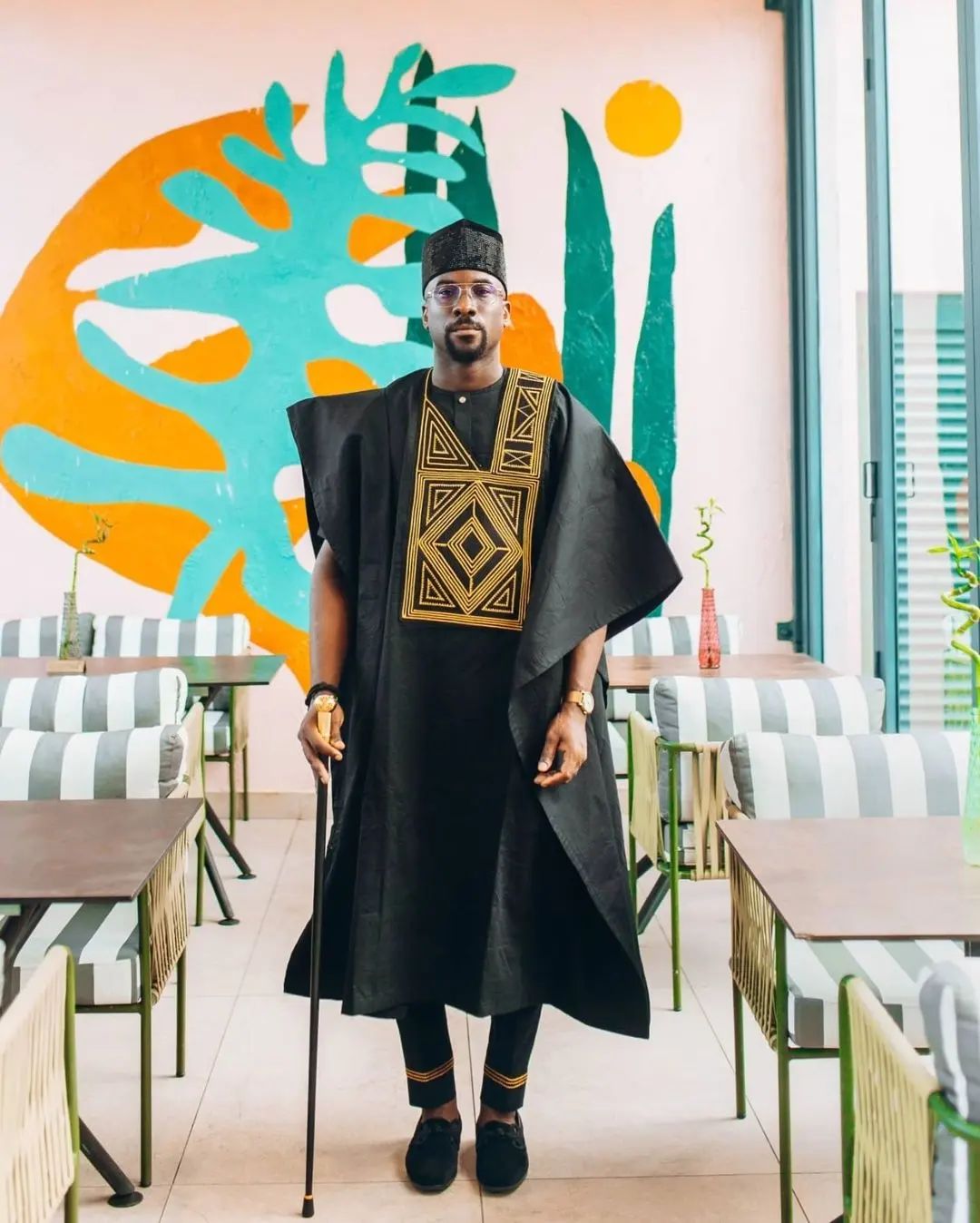 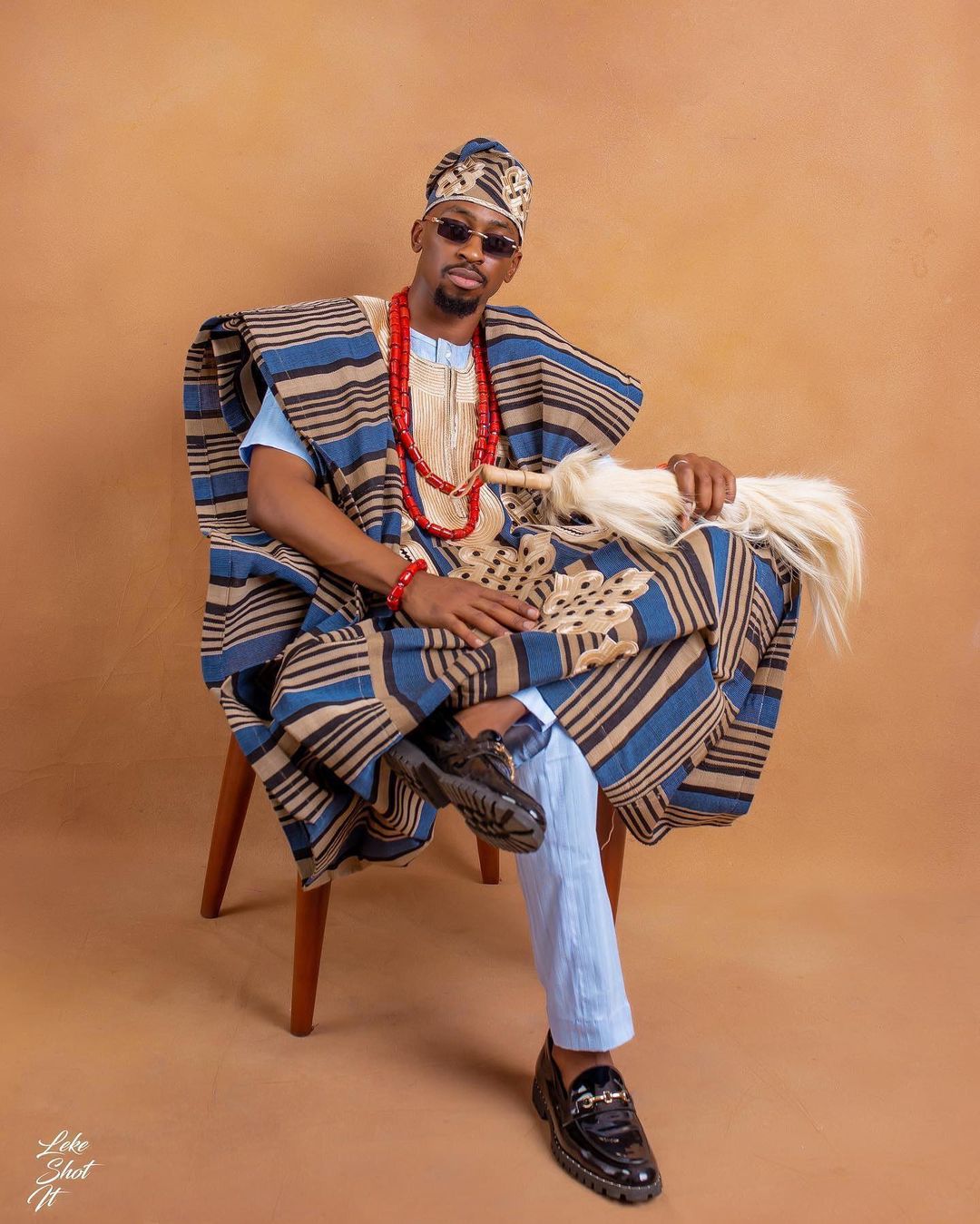 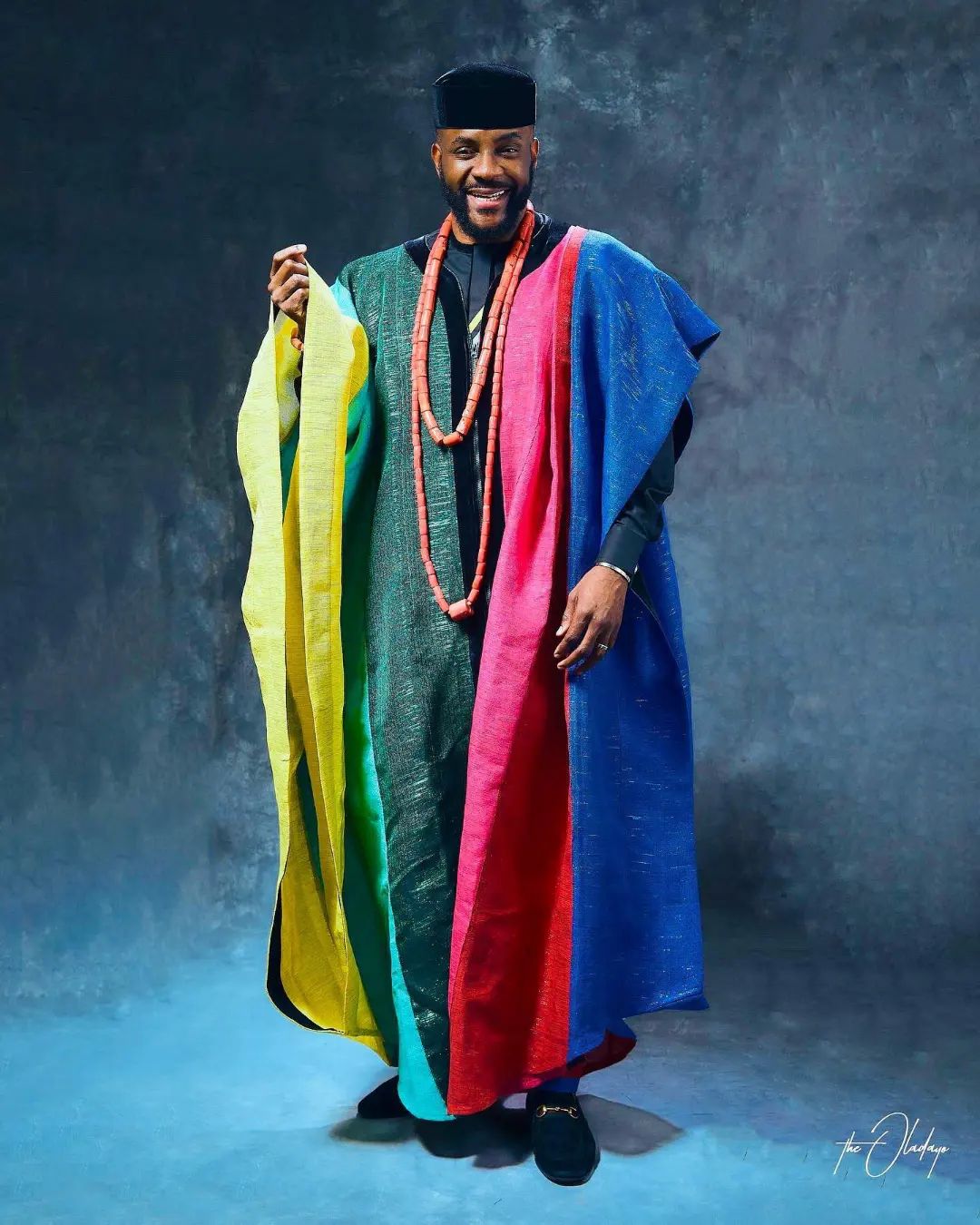 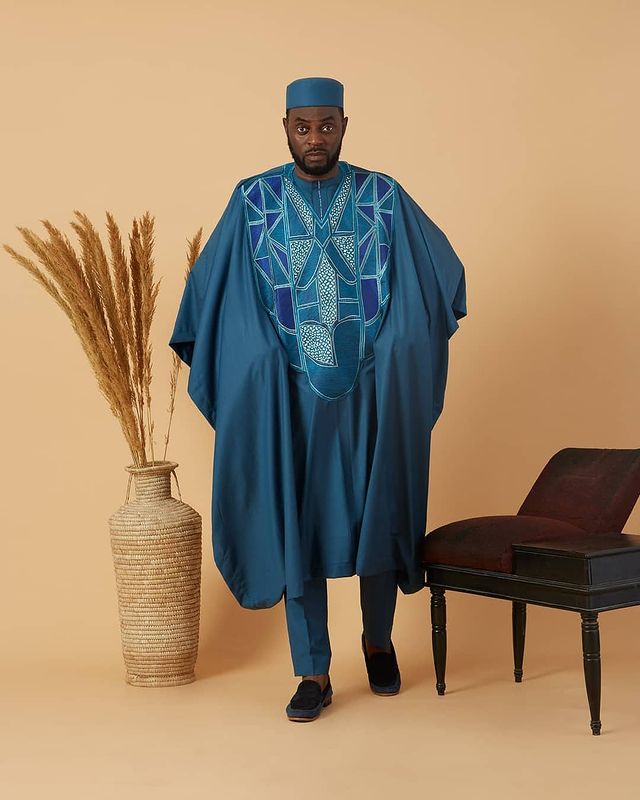 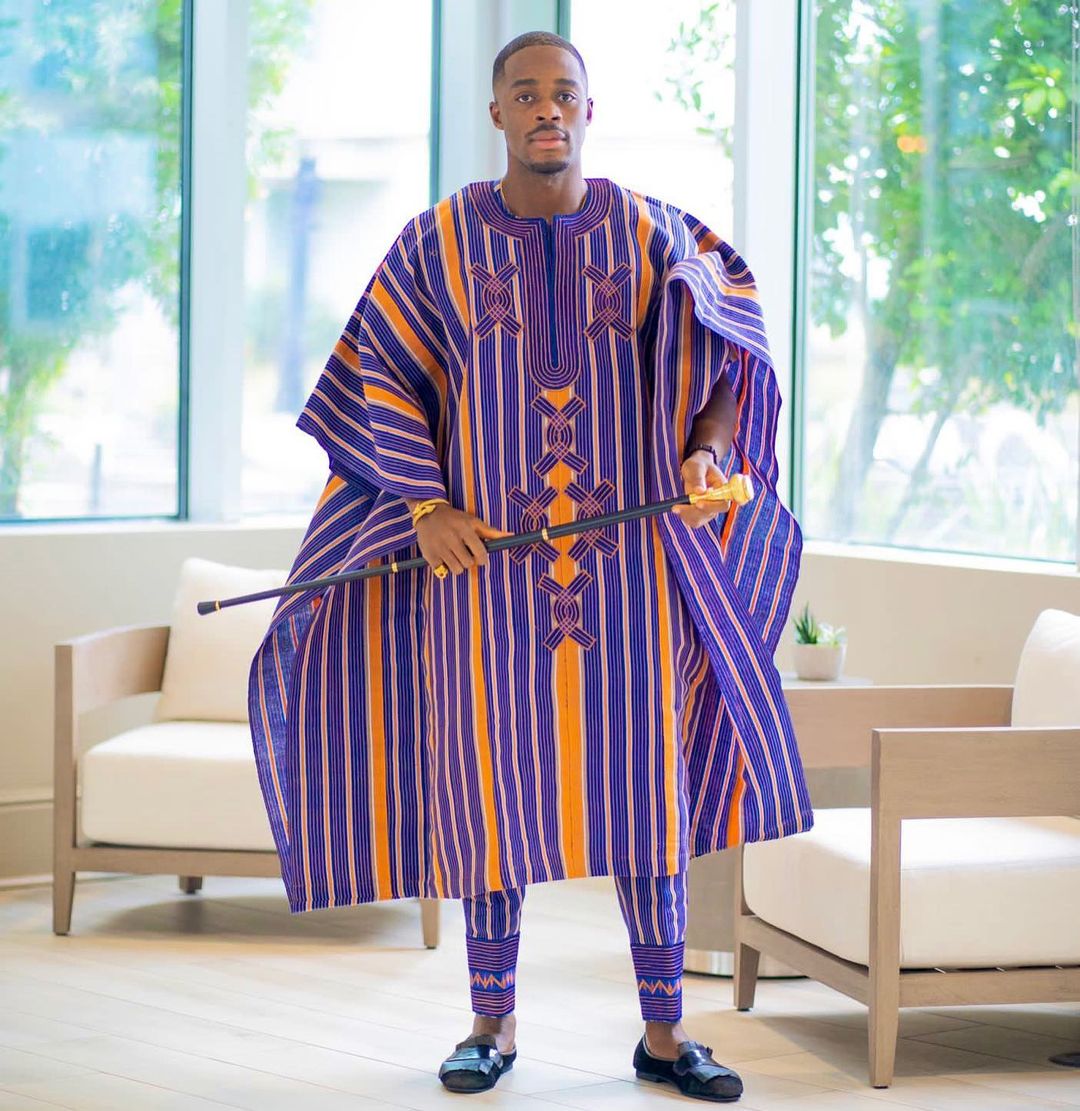 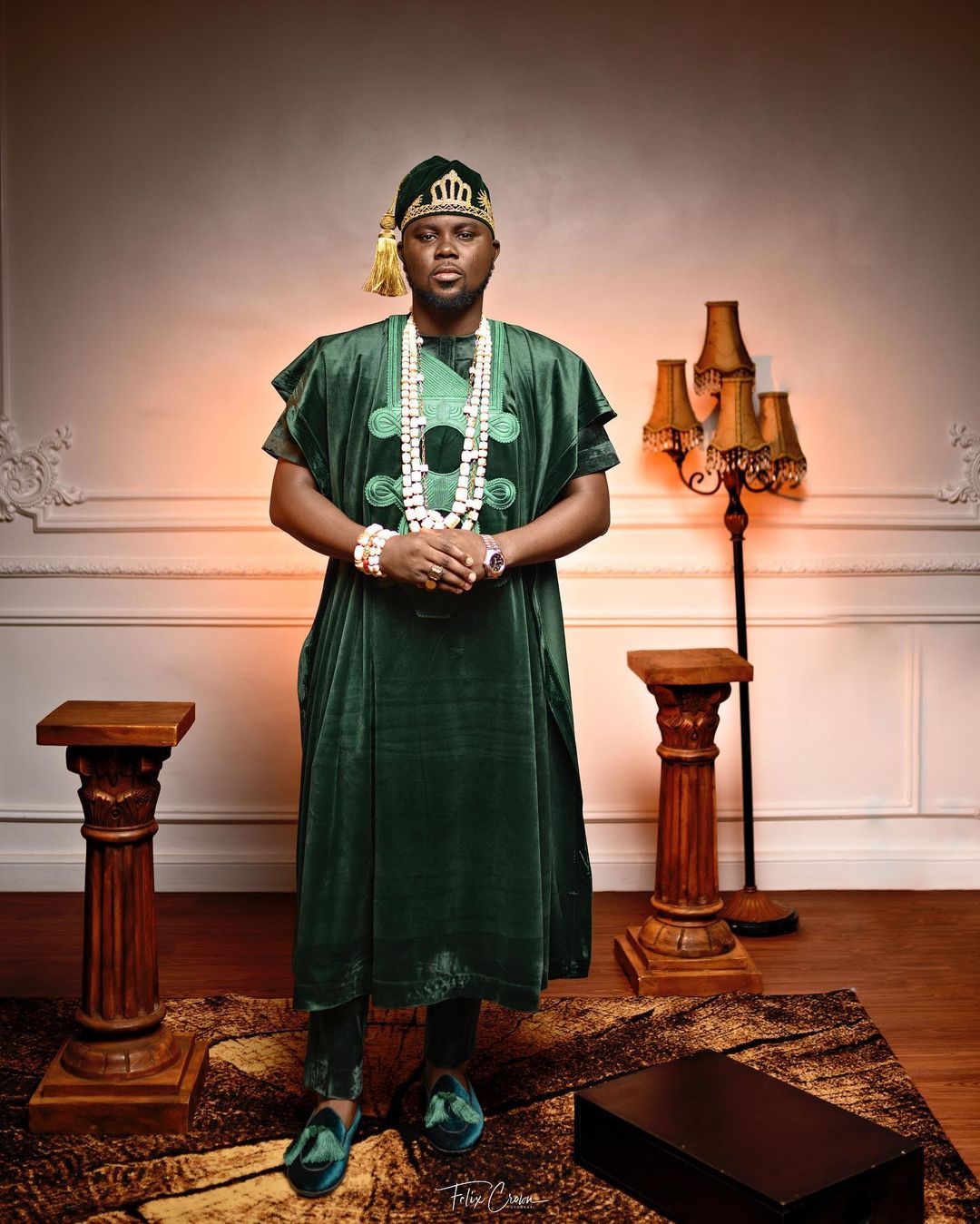 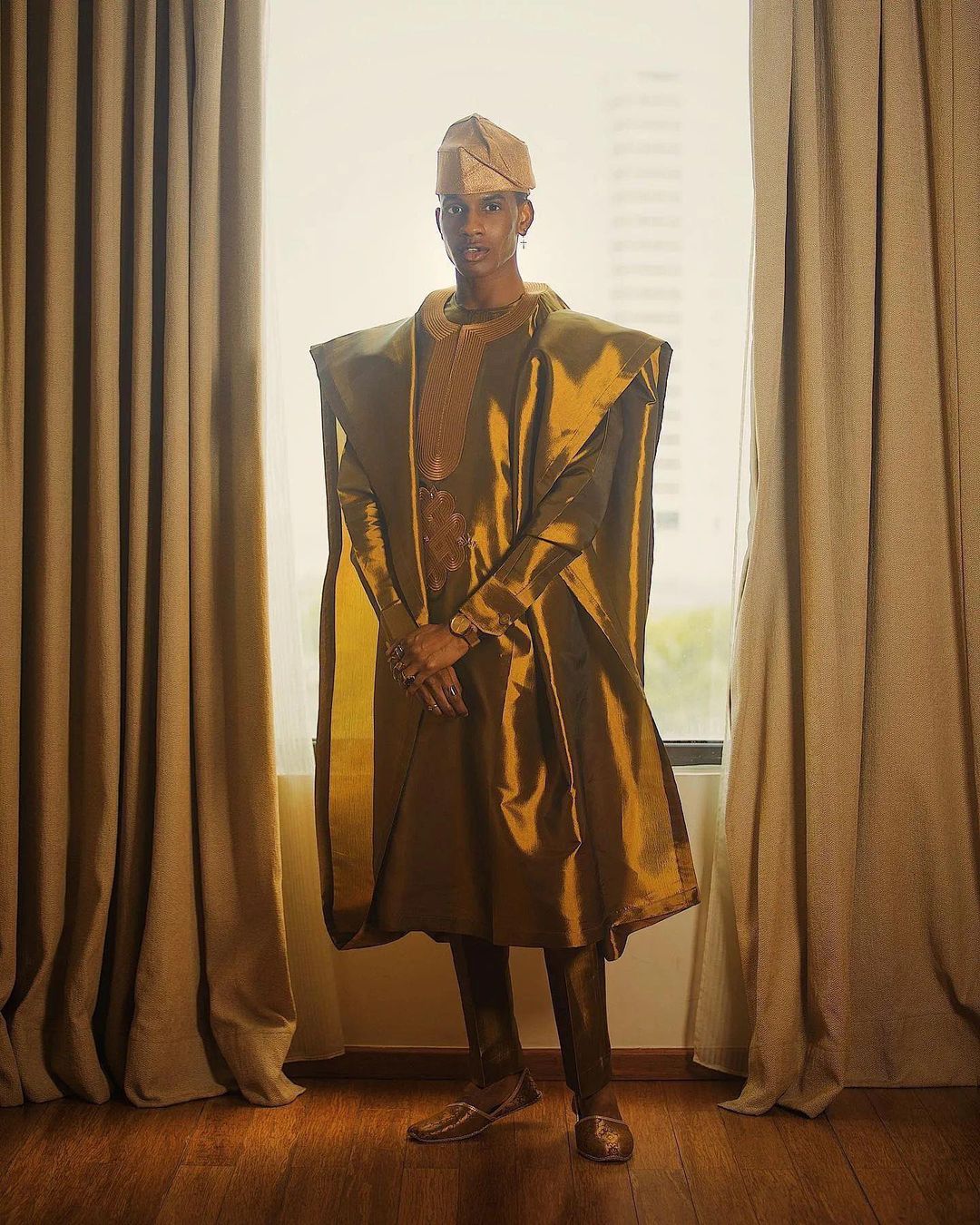 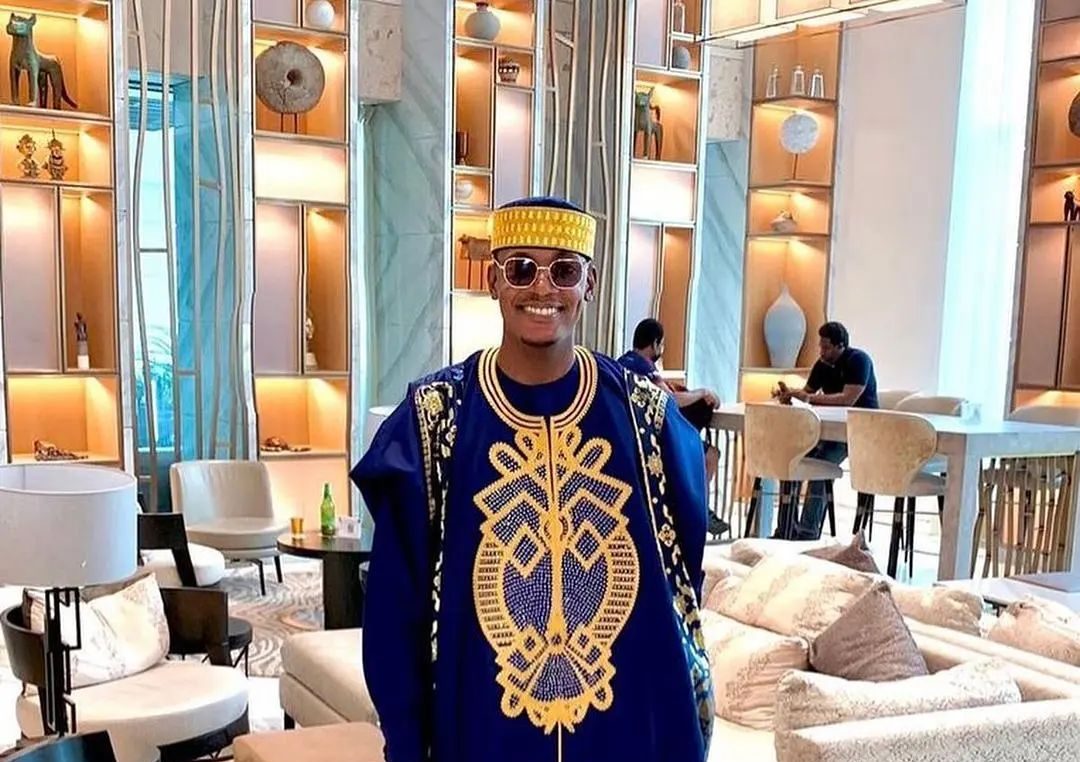 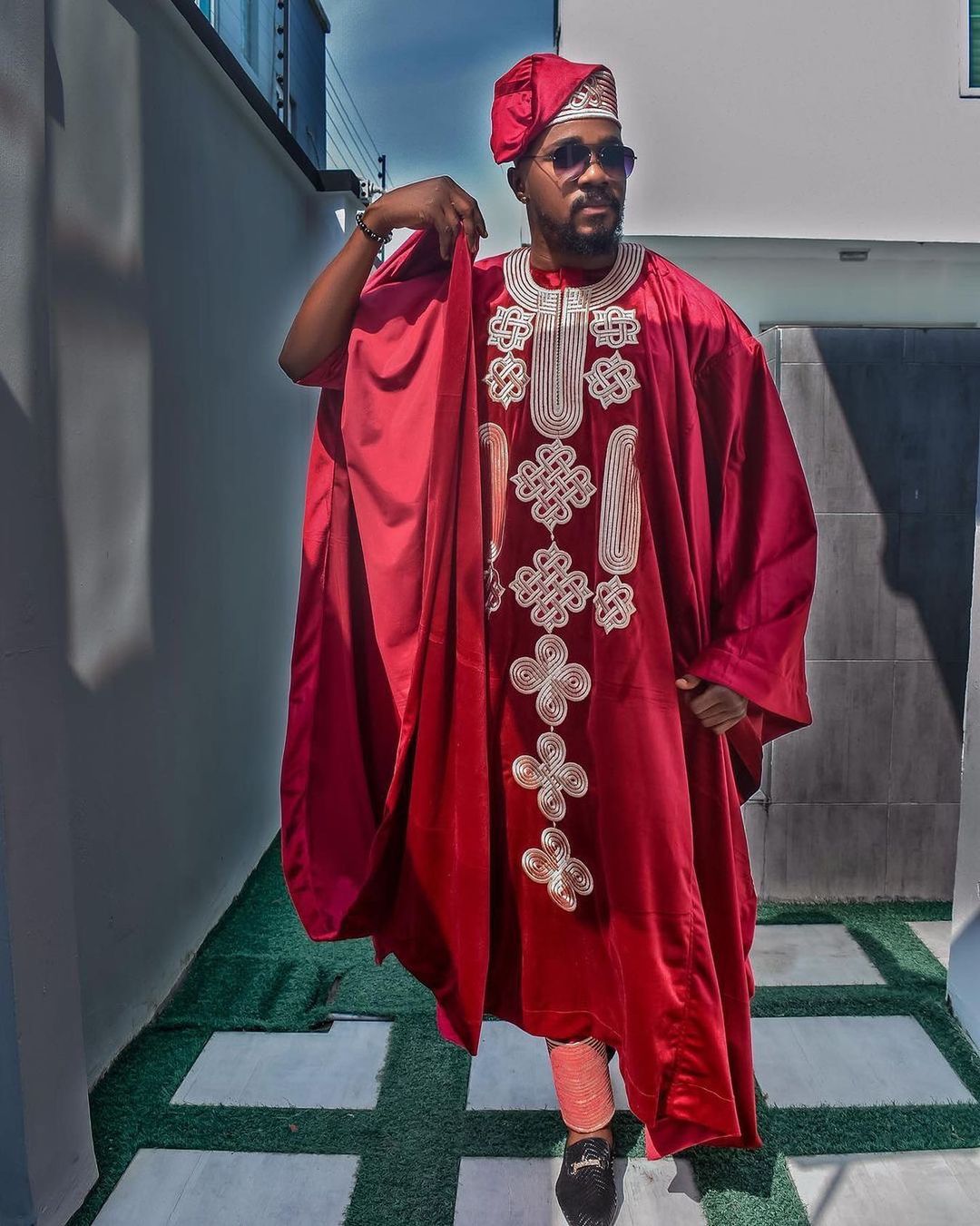 Avoid wrinkles
When it comes to an agbada, it’s important never to underestimate the power of a good iron. Don’t assume that just because your agbada has the best design, people will overlook its wrinkles. Take time to bring its beauty out by improving its smoothness and texture using iron and starch.

Select the right colours
Hey, you. Yes, you! If you think wearing a different colour of trousers and Buba under an Agbada is a good idea, then you better think again. For example; if you wear blue trousers, go with a blue Buba. Ignore the voice in your head that wants you to wear two different colours. It’s almost never a good idea.

Accessorise
A beautifully tailored Agbada is easily forgotten without the right accessories. Add a touch of royalty to your look with items like traditional beads, horsetail, caps, and a walking stick.

A good design and fabric
The same way we don’t talk about socks on slides is how plain Agbadas are slowly becoming a taboo. While it might cost more, make a conscious effort to ensure your tailor includes design elements like embroidery on your agbada.
Additionally, select the right fabric material capable of actualizing your dream agbada look.

What's New
Squid Game Actor O Yeong-su Accused Of Sexual Assault Misconduct
6 hours ago
O Yeong-su, from the famous Squid Game on Netflix, has been accused of sexual misconduct in Seoul, South Korea. The 78-year-old Golden Globe winner was accused without being detained on, according to the Suwon District Prosecutors Office, following allegations that he illegally touched a lady in 2017. According to Yonhap, the woman initially filed the…

Film
Bambi And Companions Take On A Sinister Look In Upcoming Film
7 hours ago
The 1942 Disney film of the same name, 'Bambi' and his woodland companions Thumper and Flower have preserved a charming, wholesome persona for the past 80 years. According to media sources, the once lovable animal will now reveal his sinister side in the upcoming horror film 'Bambi: The Reckoning'. The macabre adaptation of Felix Salten's…

What's New
Kim Kardashian Rethinks Working Relationship With Balenciaga
7 hours ago
Kim Kardashian has confirmed that she will reevaluate her professional relationship with Balenciaga. The reality Tv star made this assertion after a recent advert gone wrong by the fashion house (Balenciaga) featured children cuddling teddy bears wearing bondage gear. The reality TV star and founder of Skims, who has served as the fashion label's ambassador,…

Wellness
Is Your Child Obese?
8 hours ago
Parents often see weight gain in their children as a sign of “good living,” but you need to know what level of weight gain is healthy and when you should be concerned. Uncontrolled weight gain in children puts them at risk of obesity, and its related complications, most of which surface as they grow. Every…

Food
Refreshing Drinks To Have Before, During And After Workout Sessions
14 hours ago
Sports drinks are loaded with carbohydrates in the form of sugar and are promoted to reload glucose, fluids and electrolytes (sodium, potassium, magnesium, calcium) lost during rugged exercise including to improve endurance. However, it has become general knowledge that staying away from such manufactured items is best for one's health, so, why not keep it…

What's New
Kizz Daniel Makes World Cup Appearance, Performs "Cough" (Odo)
4 days ago
During the FIFA Fan Festival at the Qatar 2022 World Cup, Nigerian music sensation Kizz Daniel gave an outstanding performance. With the current hit song "Cough" (Odo) at his disposal, the singer dazzled an audience of more than 50,000 on Wednesday night. The "Buga" crooner performed live with a live band, and some of the…

Music
Somadina Releases Debut EP “Heart Of The Heavenly Undeniable”
23 Nov
Rising singer-songwriter Somadina releases her debut EP HOTHU, “Heart of the Heavenly Undeniable”. To celebrate the project's release, Somadina reveals the brand-new visual for the single “Y I Want U'' directed by 2brthrs, chopped & screwed by her long-standing collaborator, Chukwuka Nwobi. Backed by a band of Nollywood punk-inspired girls, Somadina is uniting women to…

Law
Democracy and legal order: shaping the future
29 Mar
The lesson of inevitability of democratic values within the legal order is not lost on any serious legal practitioner or even casual observer of goings-on in society and indeed the human destiny.

Law
Democracy and legal order: Shaping the future
5 Apr
The lesson of the inevitability of democratic values within the legal order is not lost on any serious legal practitioner or even casual observer of the goings-on in society and indeed human destiny.

Politics
Political cost of cancelling Tinubu’s 70th birthday colloquium
5 Apr
The decision by the National leader and Presidential aspirant of the ruling All Progressives Congress (APC), Asiwaju Ahmed Bola Tinubu, to cancel the colloquium to celebrate his 70th birthday

Opinion
Fate and faith, as Obasanjo turns 85 years - Part 2
7 Apr
His mere support role behind Murtala, though dignified, was however short-lived, as the latter was assassinated in a very bloody attempt at takeover of power on 13th February, 1976.

Opinion
Abandoned promises - Part 2: In search of the 40,000mw
8 Apr
Man may not live by bread alone, but he must live on the promises of his political leaders. A promise is about a better tomorrow. If a promise is broken