FACT CHECK: Does Nigeria have more people living in extreme poverty than India and China combined?

By Dennis Erezi
Share on Facebook Share on Twitter Share on WhatsApp Share on Telegram
Does Nigeria have more people living in extreme poverty than India and China combined? Peter Obi, a former governor of Anambra State and vice-presidential candidate of Nigeria's opposition party, the People's Democratic Party in 2019 general elections, believes so. Obi said on Arise TV on February 2, that "the poverty issue, which IMF have (sic)...IMF…

Does Nigeria have more people living in extreme poverty than India and China combined?

Obi said on Arise TV on February 2, that “the poverty issue, which IMF have (sic)…IMF has not added the ones that are going to be thrown in due to the pandemic situation. If you add it, it is going to be over 100 million. That’s about 50% of your population is now living under poverty.

“We are in a situation where Nigeria now have (sic) more people living under poverty than China and India combined. These two countries…their population is 2.8 billion.”

Later on during the interview, Obi clarified what he meant to live in poverty: “For those living in poverty, they are those people living under $1.90 cents. That means we are talking about people earning N800 a day,” he said 7:23 seconds into the interview as published on YouTube.

Obi’s explanation is the same yardstick used to determine persons living in extreme poverty, according by the World Poverty Clock.

However, the statistics published by the World Poverty Clock, the same organisation, whose figures foisted on Nigeria the description of poverty capital of the world in 2018, shows that India alone now has more people living in extreme poverty than Nigeria.

World Poverty Clock also indicated on its website that its latest figures were arrived at after taking into consideration the impacts of the coronavirus pandemic. 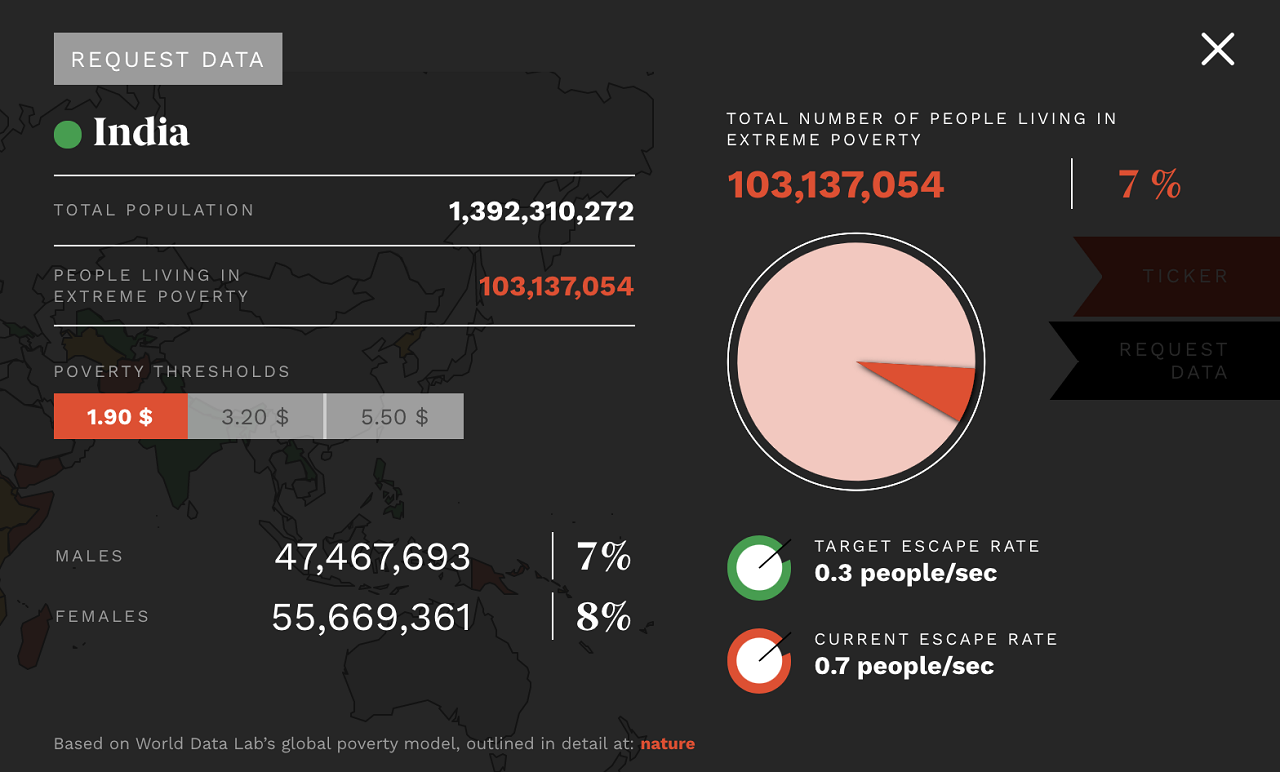 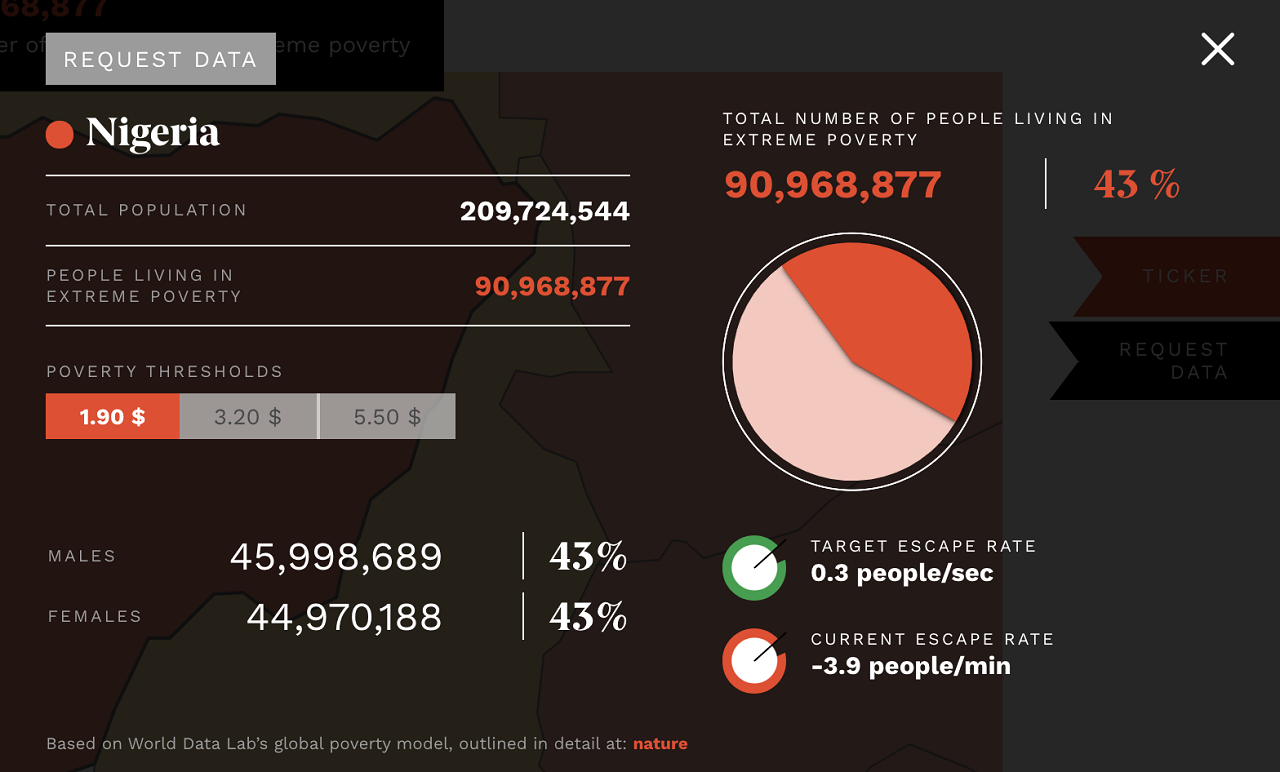 Moreover, the World Bank, in its biennial Poverty and Shared Prosperity Report: Reversals of Fortune released on October 7, 2020, panned India’s inability to publish its latest data on poverty. “The lack of recent data for India severely hinders the ability to monitor global poverty,” the report said.

China
Although, World Poverty Clock does not have specific statistics on the poverty level on China, its country card for China shows that less than 3% of the country’s population live in extreme poverty.

But the Chinese government announced last November that it had eliminated extreme poverty in the country one month ahead of its target. The country had set the goal of eliminating extreme poverty by the end of 2020.

Reuters reported that the national standard of extreme poverty China sets for itself is based on a per capita income threshold of 4,000 yuan (about N236,000) per year, or around $1.52 per day, and other factors such as access to basic healthcare and education.

Verdict
Obi’s claim is untrue. Nigeria does not currently have more people living in poverty than China and India combined. In fact, Nigeria’s poverty level has reduced by almost 10% in the last three months when it overtook India in the World Poverty Clock ranking.

Nigeria’s current poverty level of 90,968,877 was an improvement from November 2020 when it had 105 million people living in extreme poverty.

Peter Obi’s claim, however, only aligned with an old statistic when Nigeria had more people living in extreme poverty than China and India combined in 2019, according to the World Poverty Clock.

Nigeria
Emefiele counters Ganduje, says currency swap not threat to Presidential Visit
30 mins ago
The Governor of the Central Bank of Nigeria (CBN), Mr Godwin Emefiele, says the excuse of security threats pushed by Gov. Abdullahi Ganduje of Kano State has no bearing on the ongoing currency swap across the country.
Nigeria
No single government can solve Nigeria's problems, says Buhari
1 hour ago
President Muhammadu Buhari has said that no single government can solve the mirage of problems confronting Nigeria, noting that it will take the combined efforts of successive governments to achieve.
Nigeria
Alleged data breach: NDPB investigates GT, Zenith banks
1 hour ago
The Nigeria Data Protection Bureau (NDPB) has commenced investigation into allegations of data breach by Guarantee Trust and Zenith Banks.
Nigeria
Governor AbdulRazaq briefs Kwara professionals in Lagos on strides, post-2023 plans
2 hours ago
Kwara State Governor AbdulRahman AbdulRazaq at the weekend met with a rich crop of Kwara Professionals resident in Lagos, debriefing them on the journey since 2019, the measurable strides of his administration across different sectors, and his vision for the state when re-elected in the 2023 ballot. The briefing was a continuation of the Governor’s…
Nigeria
Nigeria risks losing foreign assets to reckless borrowing, CSOs warn
3 hours ago
*Blames national assembly for country’s rising debt woes *Says reckless borrowing responsible for Nigeria’s policy challenges *Plans orientation exercise for 10th National Assembly Civil Society Organizations, (CSOs) have raised concern over Nigeria’s rising debt profile describing it a ‘debt trap’ already worsening the country’s crisis ridden economy and costing the nation its foreign assets. The…

Politics
2023: How Peter Obi is changing face of Southeast orientation
28 Jun 2022
With their two states apiece in the Southeast, emerging indicators show that governing All Progressives Congress (APC) and the main opposition Peoples Democratic Party (PDP) would be lucky

Opinion
Of June 12 and 2023 elections - Part 3
29 Jun 2022
The political parties have submitted the names of their presidential candidates and their running mates to INEC, with little surprises.

Politics
Fayose shuns Atiku, PDP to support southern presidential candidate
29 Jun 2022
Former Ekiti State governor Ayodele Fayose Wednesday said he will support a southern candidate in Nigeria's 2023 presidential election. Fayose, a former two-term governor was elected on the platform of the People's Democratic Party (PDP) in the southwest state in 2003 and 2014. "The current President of Nigeria is a 2-term Northern Presidency, thus implying…

Opinion
Obidient and matters arising
30 Jun 2022
“My dear brother, it’s been a minute. Where have you been? I haven’t seen you in a long while. How are you doing? These are interesting times in this country.”