By Tonye Bakare
Share on Facebook Share on Twitter Share on WhatsApp Share on Telegram
Scammers have latched on to the recent philanthropic drive of MacKenzie Scott, the former wife of Amazon founder Jeff Bezos, to help people deal with the economic impacts of the COVID-19 pandemic. At least a scam ring has a fictitious website it uses to defraud registered by a Nigerian web hosting company. MacKenzie Scott acquired…

Scammers have latched on to the recent philanthropic drive of MacKenzie Scott, the former wife of Amazon founder Jeff Bezos, to help people deal with the economic impacts of the COVID-19 pandemic.

At least a scam ring has a fictitious website it uses to defraud registered by a Nigerian web hosting company.

MacKenzie Scott acquired Amazon stakes valued at $58 billion as a part of her divorce settlement with Bezos. She pledged to give out the majority of the wealth to charity, dishing out nearly $6 billion in 2020 alone.

To distribute the gifts, Scott did not rely on any known foundation, headquarters or public website. There was no known way to reach her representatives either.

She, however, enlisted a team of advisors to identify organisations that are helping people cope with the impacts of the pandemic.

Scott has been praised for her method of giving because it helps move money faster to those who need it.

“The pandemic has amplified an imperative in getting money out the door as fast as possible,” Benjamin Soskis, senior research associate at the Center on Nonprofits and Philanthropy at the Urban Institute, told AFP.

“She has emphasized giving money and getting out of the way,” Soskis said.

“Philanthropists often see themselves as part of the process, with multiple checks and evaluations and metrics which can be really burdensome.”

But the method is now being exploited by scammers who are conning people out of their money using her name. And scammers with ties to Nigeria have been fingered in the elaborate plot.

The New York Times reported the case of a struggling Australian mother of five who was defrauded of over 10, 000 Australian dollars after being led to believe that she had been given $250, 000 by MacKenzie Scott.

Danielle Churchill was in dire need of financial help when she was contacted by the fictitious MacKenzie Scott Foundation in 2020.

With her son diagnosed with autism and in need of special education, and her mother on dialysis, Churchill thought a $250, 000 gift would help solve her problems.

To claim the nonexistent gift, Churchill was asked to fill “membership form” sent to her and to set up an online account with Investors Bank and Trust Company.

A screenshot from the phony bank website. The site has since been suspended by the host. PHOTO: New YORK Times 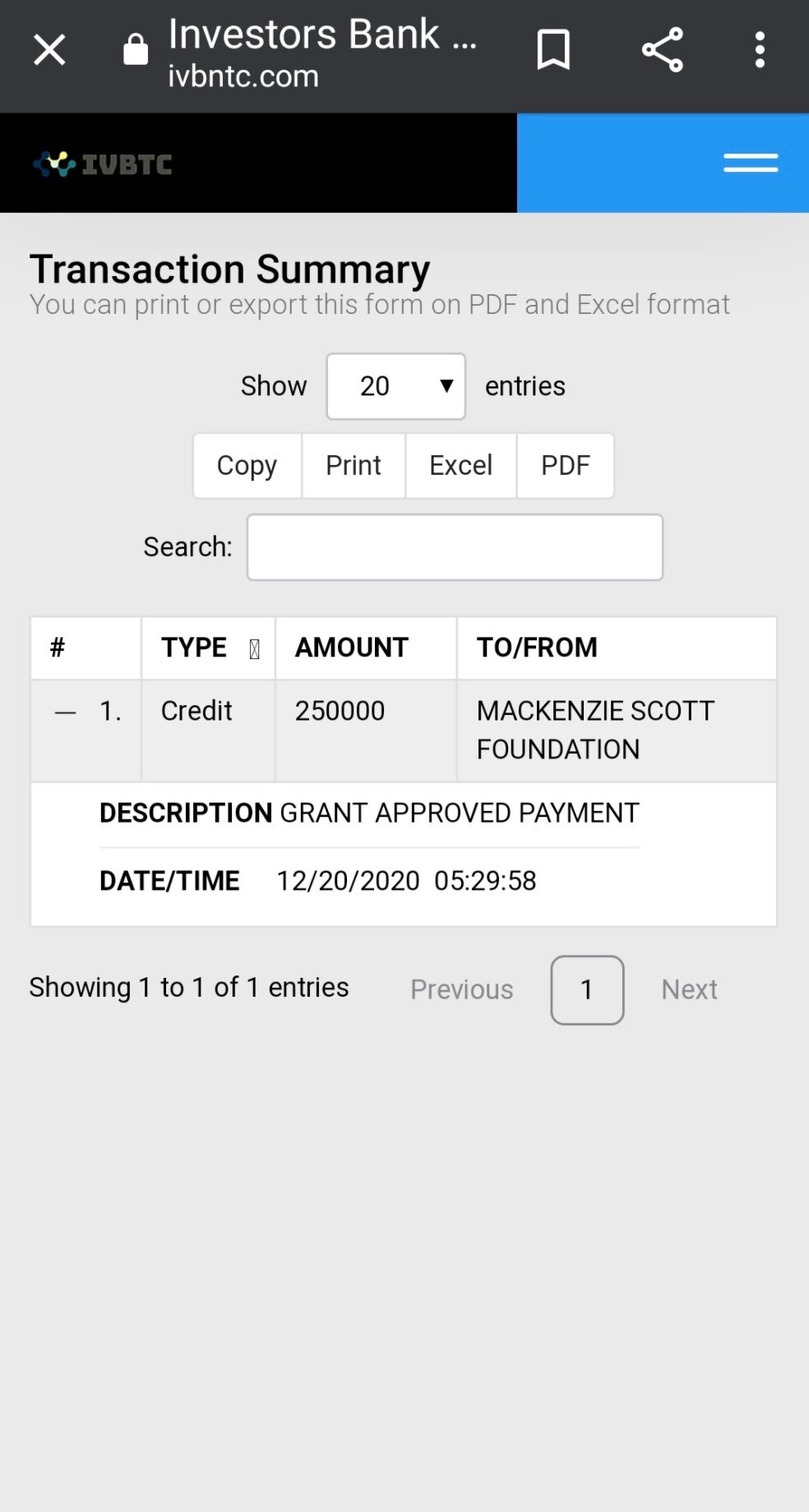 A screenshot from the phony bank website. The site has since been suspended by the host. PHOTO: New YORK Times

In the account, she could see $250, 000. But because she was in Australia, she was asked to apply for a tax number and to pay specified fees before she could start accessing the money.

Unknown to her, Scott does not have any social media presence apart from her verified Twitter page (with just three tweets posted) and a Medium account.

Scott also does not give money directly to individuals. Instead, she focuses on universities, food banks and other charities.

But Churchill was not aware of this. She was not also aware that Investors Bank and Trust has folded into State Street Corporation more than 10 years ago, New York Times reported.

Before she could detect the fraud, she had been scammed of about $7, 900 sent through a Bitcoin app, which effectively put paid to her being able to reclaim her money.

The fake website – ivbntc.com – used to con her was registered in Nigeria by WhoGoHost, a Nigerian web hosting company.

A contact person said on Monday morning that the company was not aware of the activities of the website and asked that an email should be sent to abuse@whogohost.com for more information.

“We already got a report on the website and we have taken down the website,” said Omotola A
Lead, Admin and Compliance at WhoGoHost said in an email on Monday. “We are currently investigating the website and once we finalize our investigation, we will give a response to the appropriate authority.”

The website has since been suspended by the hosting company.

What we know about the ivbntc.com
The website was first registered on October 2, 2020, and set to expire on October 2, 2021. Details provided for the website showed that the registrant listed 18, San Carlos, Los Angeles, California, as the contact address.

A Google Maps and Apple Maps searches of the address showed that it is fake as there is no Number 18 on the specified street.

However, a Google search for ivbntc.com showed another listed address – 3007 Sarah Drive Franklin, LA 70538, which is also listed for a number of possibly fictitious banks – with extremely limited digital footprint – also used the same address when registering their websites.

For instance, a Lichfield Bank is listed to be operating from that address. According to British Museum, a Lichfield Bank operated between 1765 and 1855. The bank which claimed to operational in the United States is not listed by the Federal Deposit Insurance Corporation, which “insures deposits; examines and supervises financial institutions for safety, soundness, and consumer protection.”

Nigeria
Police arrest Ondo pastors for kidnapping 77 persons, kids
4 hours ago
There was pandemonium in Ondo State as the pastor of a pentecostal church, David Anifowoshe, was arrested by the police for allegedly abducting more than 77 people, including children in a dungeon in his church. Anifowoshe, who is the pastor of Whole Bible Deliverance Church, located in Valentino Area of Ondo West LGA of the…
What's New
Seun Kuti cancels Morocco gig over migrant deaths
7 hours ago
Seun Kuti, son of Afrobeat legend Fela Kuti, has cancelled a concert in Morocco to mourn last week's tragedy on the border of Spain's Melilla enclave in which at least 23 African migrants died. Saxophonist and singer Kuti had been set to play on Saturday at the Jazzablanca festival in the Moroccan port city of…
World
Protesters rally in Spain, Morocco over migrant deaths
7 hours ago
Demonstrators held rallies in several Spanish cities and in Rabat late Friday to protest over the deaths of 23 African migrants who died in a crush trying to enter the Spanish enclave of Melilla in northern Morocco. Thousands of protesters gathered in Barcelona, Malaga, Vigo and San Sebastian and in Melilla itself to denounce migration…
World
One killed, six injured in Serbia migrant shootout
8 hours ago
One migrant was killed and at least six others, including a teenage girl, were injured Saturday in a shootout between migrant groups in Serbia near the Hungarian border, the state-run RTS television reported. The 16-year-old girl sustained life threatening injuries in the incident that occurred in a forest in the outskirts of Subotica, some 160…
Guardian Life
How To Make A Healthy Chicken Wrap
8 hours ago
Are you planning to switch to a healthy diet? A great breakfast snack to include is a chicken wrap. Not only is it packed with healthy goodness, but it is also a delicious meal you can enjoy at any time of the day.  Need to make a healthy chicken wrap? This is the recipe you…

Nigeria
Why illegal harvesting of organs thrives in Nigeria
1 day ago
Medical doctors have given reasons black market or underground/illegal dealings in organ donation, harvesting and transplantation thrive in Nigeria.

Opinion
Much ado about Bola Tinubu’s certificates
1 day ago
Nigeria is a big collection of human species that place abundant efforts on fallacy and fancy but little confidence on facts even when reality dictates otherwise.

Features
Google trains young African talent on brand visibility, cultural promotion
1 day ago
Search engine giant, Google has trained the first batch of 25 young Alté creatives from Nigeria, Kenya, Ghana, Botswana, and South Africa to attend the Residency and be equipped with entrepreneurial skills on how they can enhance the visibility of their brands and cultural exposure.