Pro-Europe maverick Emmanuel Macron and far-right leader Marine Le Pen on Monday threw themselves into campaigning for France’s presidential run-off, with Le Pen styling herself the true candidate of change in a race stacked in Macron’s favour.

Macron is the clear favourite to become France’s youngest-ever president after topping Sunday’s ballot with 23.75 percent of votes, ahead of National Front (FN) leader Le Pen on 21.53 percent.

The result revealed a country deeply divided, with Macron, an advocate of open borders and free trade, leading the vote in cities and Le Pen topping the polls in rural areas that feel left behind by globalisation.

Le Pen seized on a flurry of endorsements for 39-year-old Macron from the mainstream parties routed in the first round as proof he was the choice of the discredited old guard.

On Sunday, the failed conservative and Socialist candidates Francois Fillon and Benoit Hamon joined a chorus of calls for voters to back Macron in order to bar a win by the anti-immigration, anti-EU Le Pen.

Visiting a market in the northern town of Rouvroy on Monday, 48-year-old Le Pen lashed out at the “rotten old republican front” — the anti-FN coalition formed by mainstream parties whenever the party comes close to power. 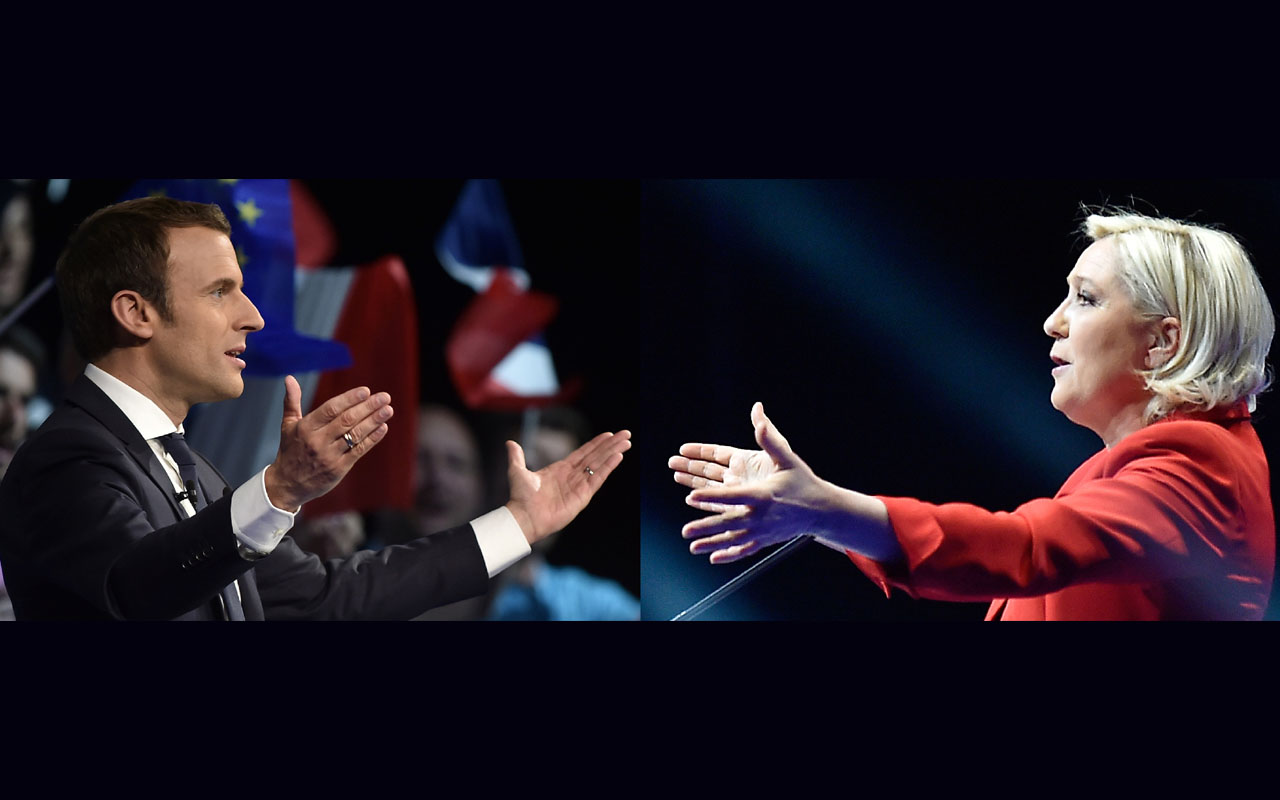 This combination of file pictures created on April 24, 2017, in Paris shows French presidential election candidate for the En Marche ! movement Emmanuel Macron (L) gesturing as he delivers a speech during a campaign meeting in Nantes, on April 19, 2017 and French presidential election candidate for the far-right Front National (FN) party Marine Le Pen speaking during a campaign rally at the Zenith venue on March 26, 2017 in Lille. AFP PHOTO / ALAIN JOCARD 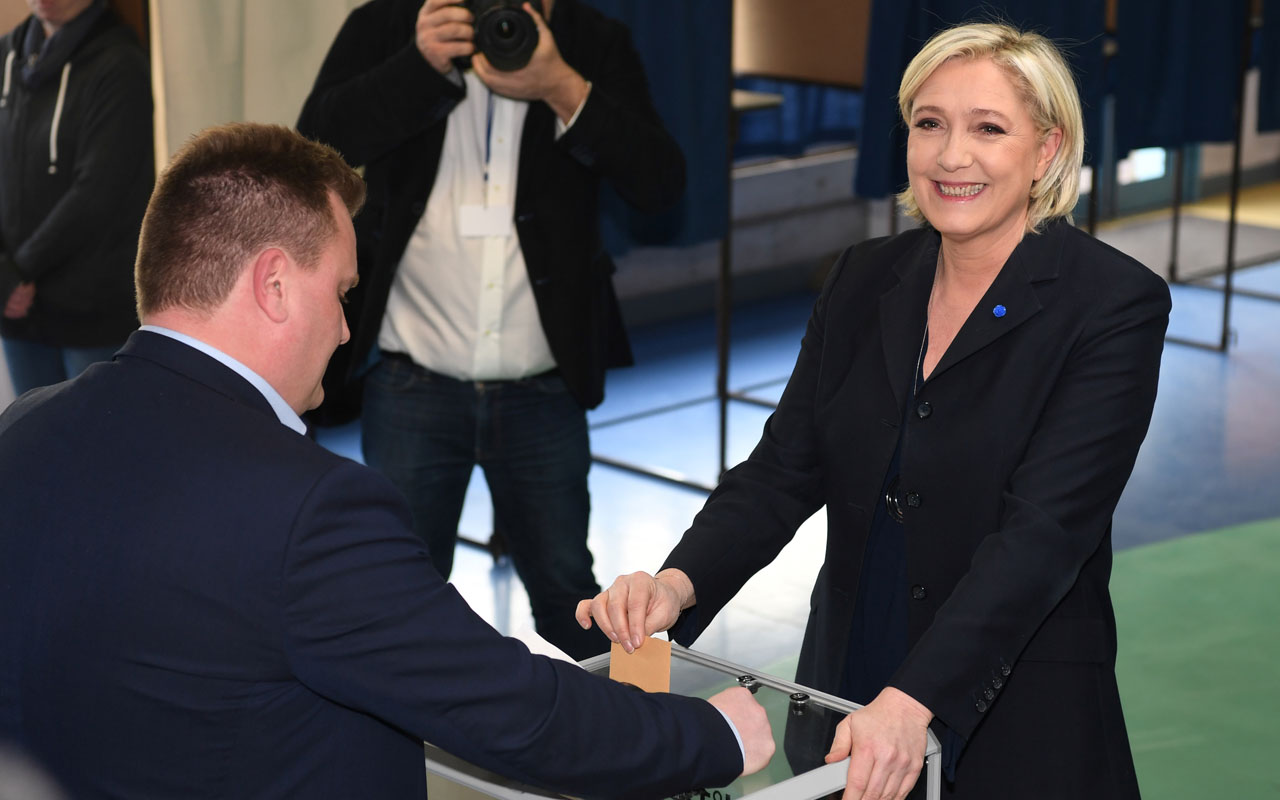 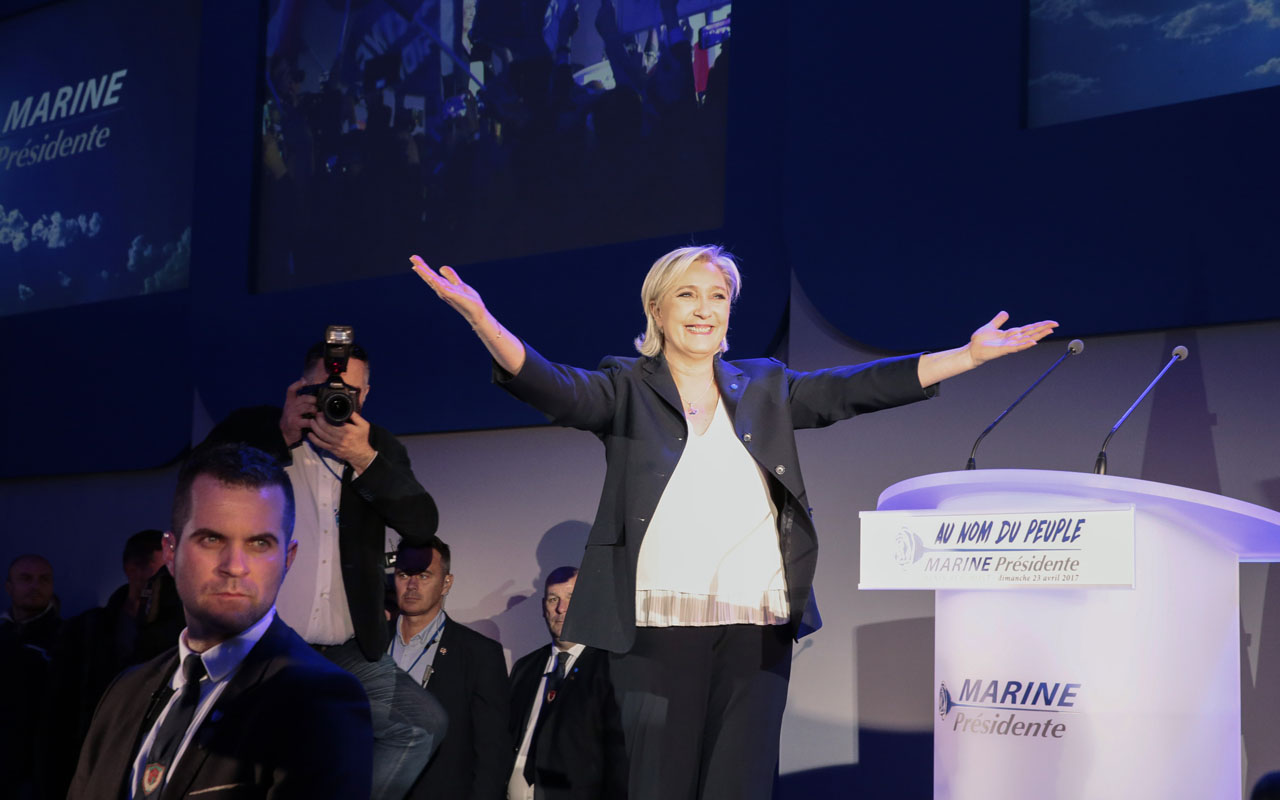 French presidential election candidate for the far-right Front National (FN) party Marine Le Pen delivers a speech in Henin-Beaumont, on April 23, 2017, after the first round of the Presidential election. / AFP PHOTO / joel SAGET 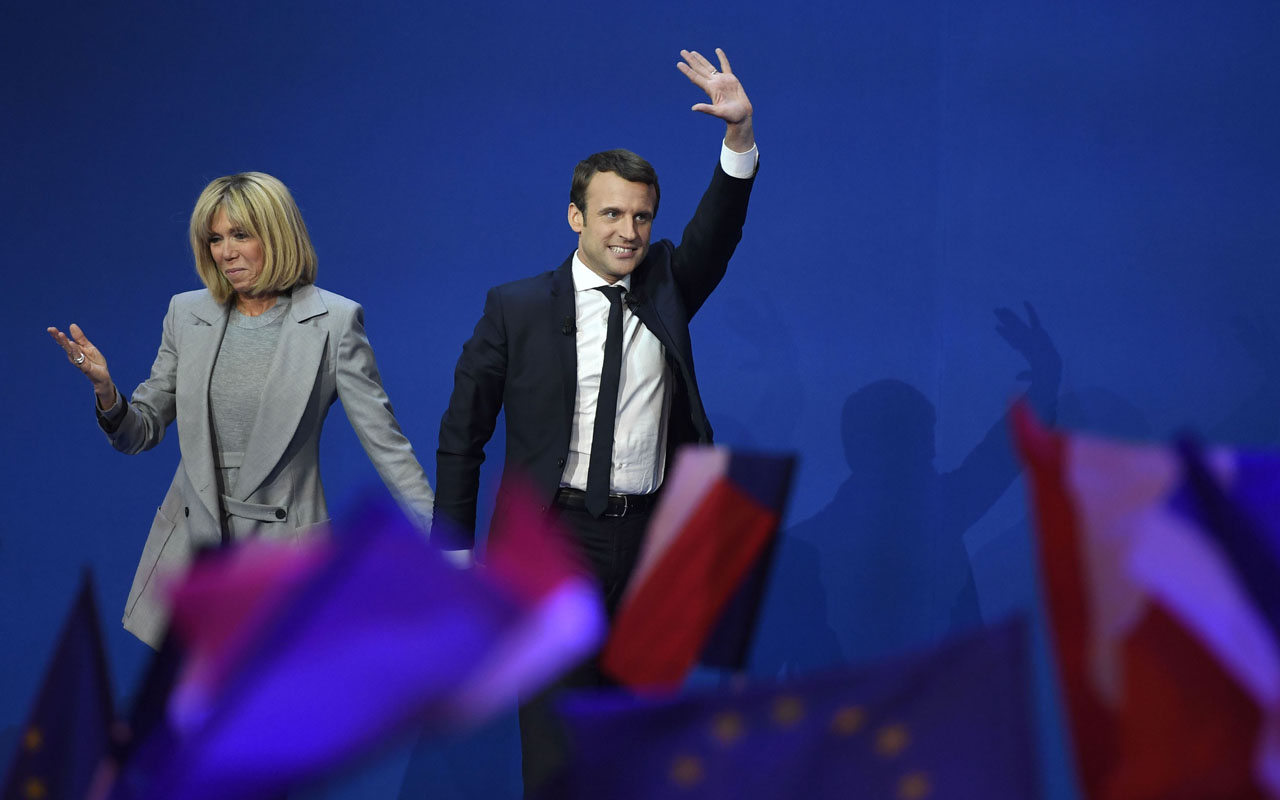 French presidential election candidate for the En Marche ! movement Emmanuel Macron and his wife Brigitte Trogneux arrive on stage at the Parc des Expositions in Paris, on April 23, 2017, after the first round of the Presidential election. / AFP PHOTO / Eric FEFERBERG

“I’ve come here to start the second round campaign in the only way I know, on the ground with the French people,” she said.

France’s traditional political class suffered a stunning blow in the election, with voters fleeing the Socialists and conservative Republicans who have governed for the past half century in favour of the extremes or outsiders.

Both Macron and Le Pen campaigned as rebels who transcended the left-right divide.

Addressing thousands of flag-waving supporters in Paris on Sunday evening, Macron said he aimed to unite “patriots” against “the threat of nationalists”.

Le Pen, who has been hoping to emulate Donald Trump’s victory in the US, said the French faced a choice between “runaway globalisation” and a protectionist France.

Her plans to restore France’s borders with its European neighbours, pull out of the eurozone and hold a referendum on leaving the EU had sown fear of another devastating blow to the bloc after Britain’s vote to leave.

– ‘Need to be humble’ –
Eurosceptics made strong gains on Sunday, with Le Pen, fourth-placed left-winger Jean-Luc Melenchon and nationalist Nicolas Dupont-Aignan taking around 46 percent in total.

But the euro rose Monday, backed by polls suggesting Macron would easily beat Le Pen in the run-off.

“Most likely, the French election can mark a turning point for France and Europe,” said analyst Holger Schmieding from Berenberg Bank.

After addressing euphoric supporters in Paris on Sunday — joined on stage by his wife Brigitte, who is 25 years his senior — Macron spent the evening at the capital’s famed La Rotonde bistro, drawing criticism for what some saw as his triumphalist attitude.

“We need to be humble. The election hasn’t been won and we need to bring people together to win,” Richard Ferrand, secretary general of Macron’s En Marche (On the Move) movement, acknowledged on BFM television Monday.

– ‘The unthinkable’ –
Despite serving as economy minister in the outgoing Socialist government of Francois Hollande, Macron casts himself as an newcomer and his year-old party as revolutionary.

“The challenge is to break completely with the system which has been unable to find solutions to the problems of our country for more than 30 years,” he said Sunday.

Le Pen gained over 1.2 million new voters compared with her last presidential bid in 2012, securing 7.6 million ballots, a result she hailed as “historic”.

But her share of the vote was far below a March poll high of 27 percent and there was an air of disappointment in her camp that she missed out on the top spot.

She follows in the footsteps of her father Jean-Marie, who made it through to the 2002 presidential run-off in what was a political earthquake for France.

Le Pen Senior went on to suffer a stinging defeat when mainstream parties closed ranks to keep him out.

Sunday’s first round capped an extraordinary campaign in a demoralised France, which has been rocked by a series of terror attacks since 2015 and is struggling to shake off a deep economic malaise.

Republicans candidate Francois Fillon was seen as the favourite until January when his campaign was torpedoed by allegations that he gave his British-born wife a fictitious job as his parliamentary assistant.

On Sunday, he trailed in third with 19.9 percent.

“The unthinkable happened,” the conservative Le Figaro newspaper wrote in an editorial on Monday, criticising the right’s defeat in an election seen as theirs to lose after five years of troubled Socialist rule.

The vote was being closely watched as a bellwether for populist sentiment following Trump’s election and Britain’s vote to leave the EU.

Le Pen seized on a jihadist attack that claimed the life of a policeman on the Champs Elysees in Paris three days before the vote to stress her tough line on immigration and Islam.

But most voters appeared to have taken the threat in their stride.