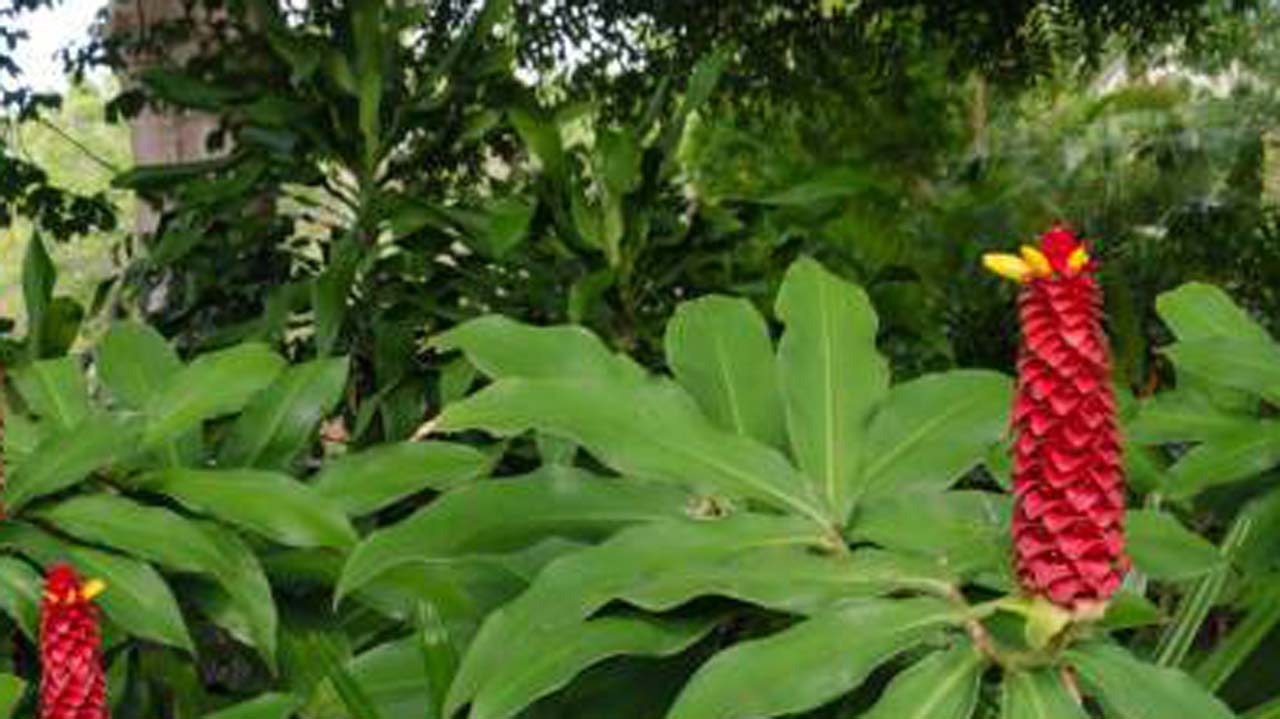 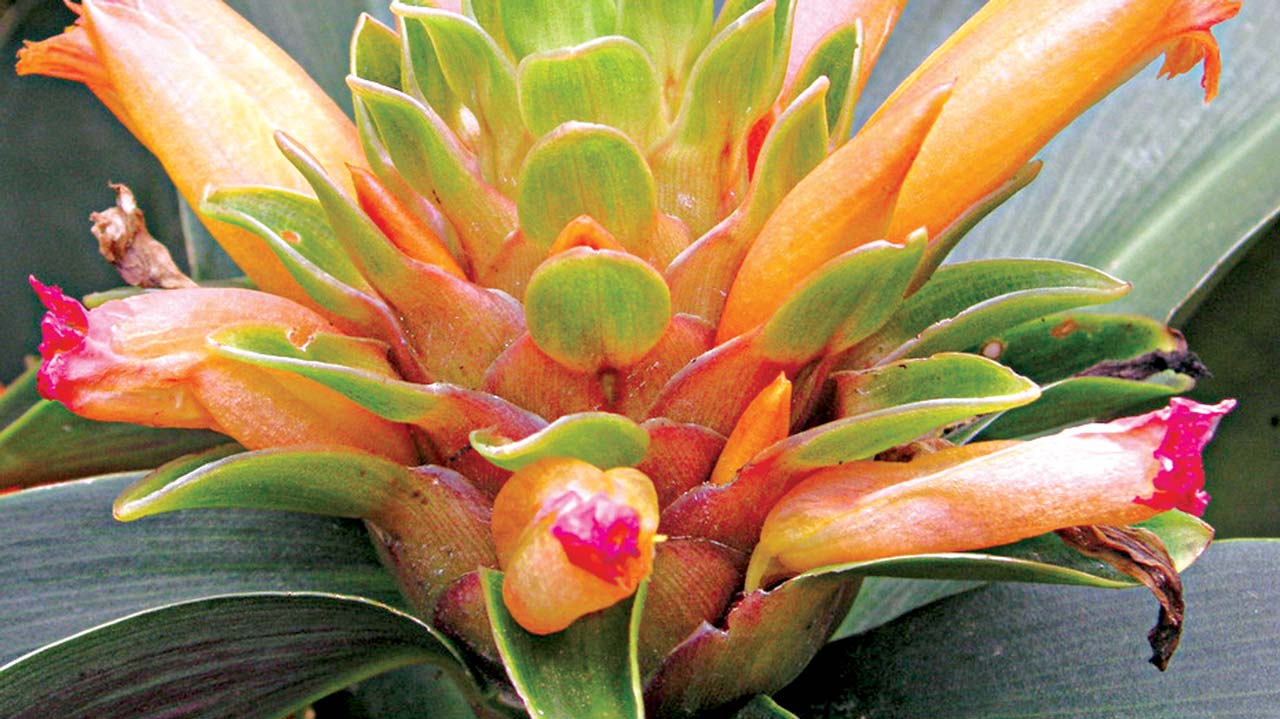 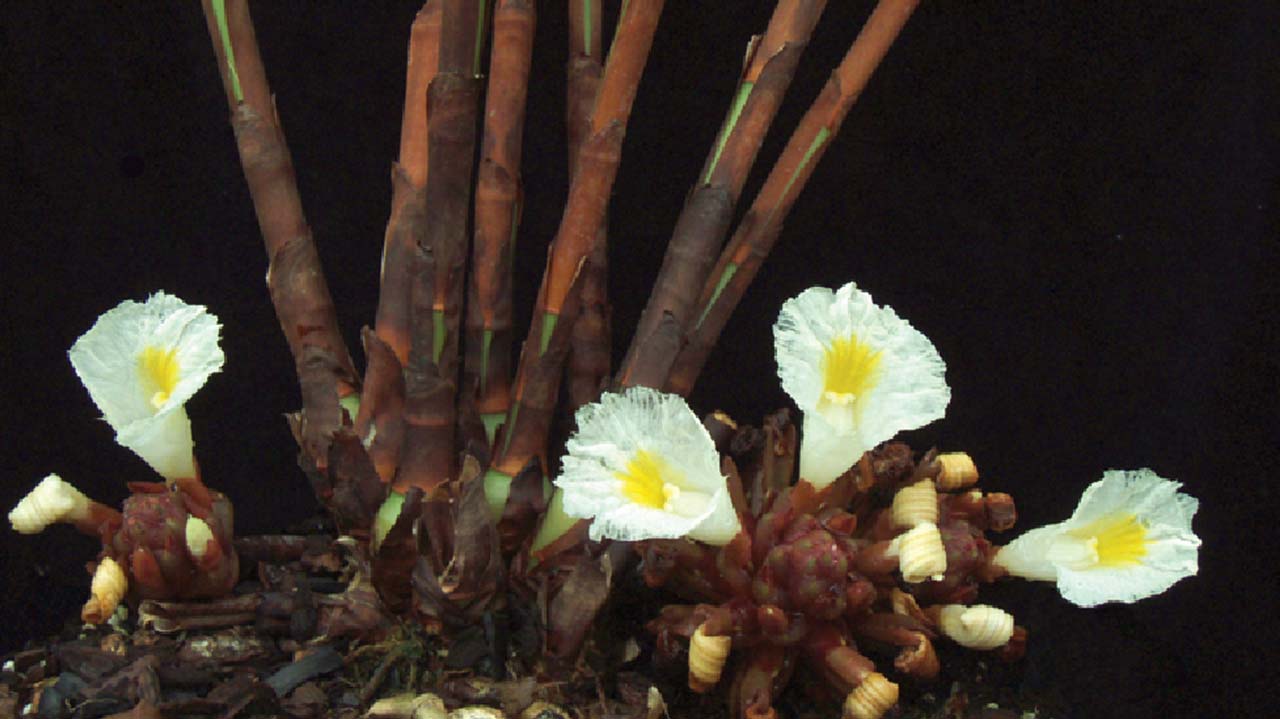 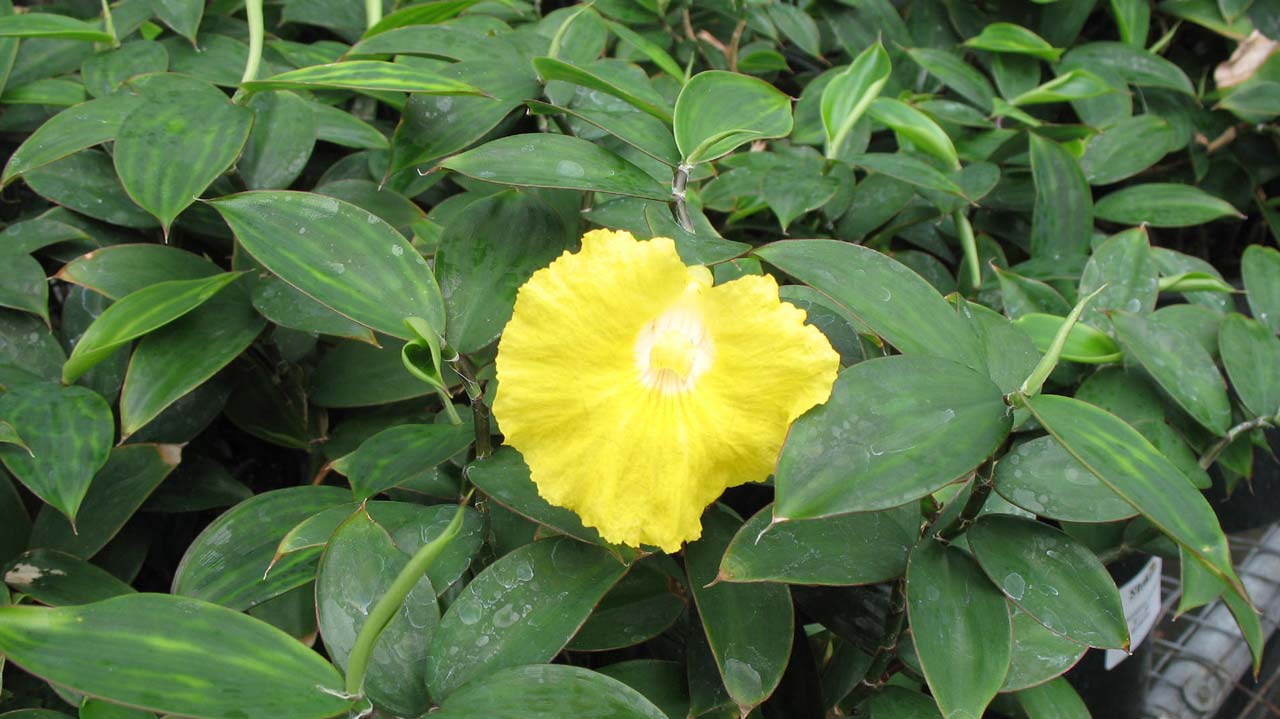 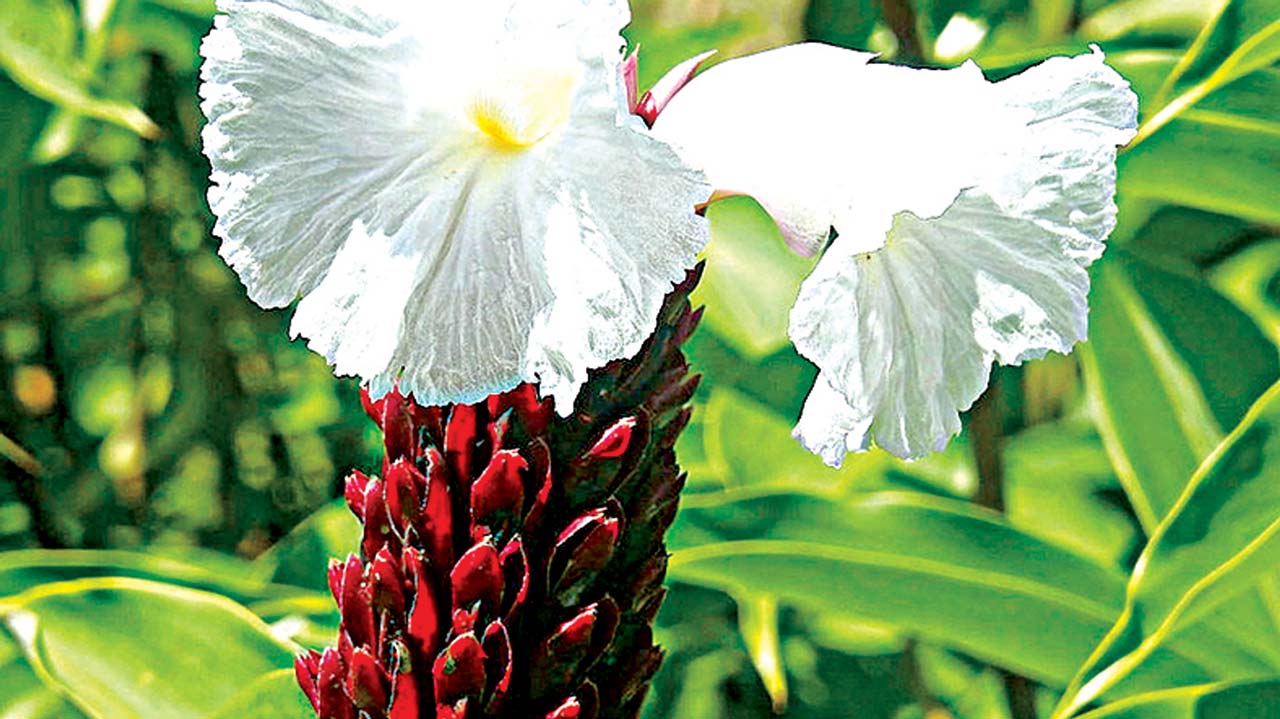 Costus Spectabilis common name ‘’yellow trumpet” or “golden trumpet” our national floral emblem (which flowers were erroneously represented in red instead of its yellow color on our national coat of arms).

Costus spectabilis belong to the Costaceae genus. The Costus family is a group of perennial herbaceous plants described by Linnaeus, the 18th century botanist in 1753. It was formerly known as Helenia after the Finish botanist Carl Niclas von Hellens. It belongs to the higher order Zingiberales,which contains horticulturally and economically important plants , such as the banana{Musaceae], bird –of- paradise {Stelitziaceace] and edible ginger [Zingiberaceae]. In addition many of the Costus species have medicinal and health benefits.

The seven genera in Costaceae contain about 143 known species: 1 in Monocostus; 2 in Dimerocostus; 16 in Tapeinochilos; 2 in Paracostus; 8 in Chamaecostus; 5 in Hellenia and 80 in Costus. The Costus group is widespread through tropical and subtropical regions of Africa, Asia, the Americas and Australia. Many species are in cultivation.

Costaceae or Costus is often characterized and distinguished from relatives such as Zingiber {true ginger}by its spiraling stems. The genus as a whole is thus often called Spiral Gingers.

Health Benefits
Most of the Costus species have been in use from antiquity in traditional medicine and cosmetics in their native regions
Costus cuspidatus ‘insulin plant” is known for its anti-diabetic properties. Costus sausserea (native to South Asia), root extracts is used in treatment of skin diseases, gout and respiratory disorders. Some Costus species produce oil and root powders used in homopaethy. In Ayurveda, Indian wholistic medicine, Costus plant oil is used in massage to balance vata and the essential oil blends well with opopanaux, patchouli, ylang ylang or any other oil with floral or oriental fragrances. The oil and powder derived from some Costus contain many properties, which are antispasmodic, antiseptic, bactericidal, antiviral, digestive, carminative, expectorant, hypotensive, febrifuge, tonic, stomatic and stimulant. Costus speciosus (crepe ginger) is a source of diogenin, a compound used for the commercial production of various steroids, such as progesterone. Aside from being used medicinally, Costus oil is used as a component in perfumes and fragrances, a fixative and incense. Even though Costus is not directly added to culinary dishes when cooking, it is nevertheless used in the food industry. The essiential oil is a flavor ingredient, especially in soft drinks, alcoholic drinks and confectionery.

Growing and Care For Costus Plants
The plant is easy to grow and it’s suprising it’s not more common in cultivation. Like many plants with fleshy leaves they have a truly exotic tropical appearance which belies their relative ease of growth. It can be grown outside and potted outside or indoors. Indoors, it’s better to use juvenile plants because the more popular species among them tend to grow fairly large. They are rhizomatous plants (meaning they grow from an underground rhizome), which makes propagation quite easy.

Growing Conditions
Light: They like morning exposure and semi-shade. It must get some hours of sun, but too much hot sun may burn the leaves. Too much shade would likely cut down on flower production, but it’s an easy plant to please.

Water: They require copious and regular watering. Plants that receive more light should get more corresponding water. Never let the soil dry out. Do not, however let them sit in waterlogged soil or the rhizome could rot.

Fertilizer: Feed monthly with a weak liquid fertilizer that contains micronutrients. They are heavy feeders, especially during the growing season.

Propagation
The easiest way to propagate a Costus is to divide the rhizome or take a piece that’s actively growing or just emerging from the soil. Separate it from the parent plant and replant into a new pot with fresh potting soil. Keep warm and moist, but do not expose to full sun until the first new growth emerges, then you can begin to move it to a sunnier location.

Repotting
Each piece of rhizome that breaks off will generate a new plant, and the questing rhizomes often come out of unexpected places like drainage holes in the pots. They also circle around the pot edge trying to escape. So this is a plant to grow in as large a container as possible, and even then you still need to divide it periodically so you don’t get too many rosettes crowding each other in the pot. When repotting use this as an opportunity to divide the rhizome and refresh your potting soil.

Growing Tips
You should be able to grow Costus without much issue. They aren’t too picky about their light, but the key to successful growth is lots of water and lots of fertilizer to keep up with their heavy demands in this regard. If your plants start to suffer from brown leaf margins, it’s most likely is being under-watered or exposed to cold drafts. Try to raise the humidity and increase the water. Costus are susceptible to mealy bugs and aphids. Keep a careful eye on your plants and inspect them to catch infestations early and treat them immediately. Severely infected plants should be discarded.