Plants and flowers for Christmas 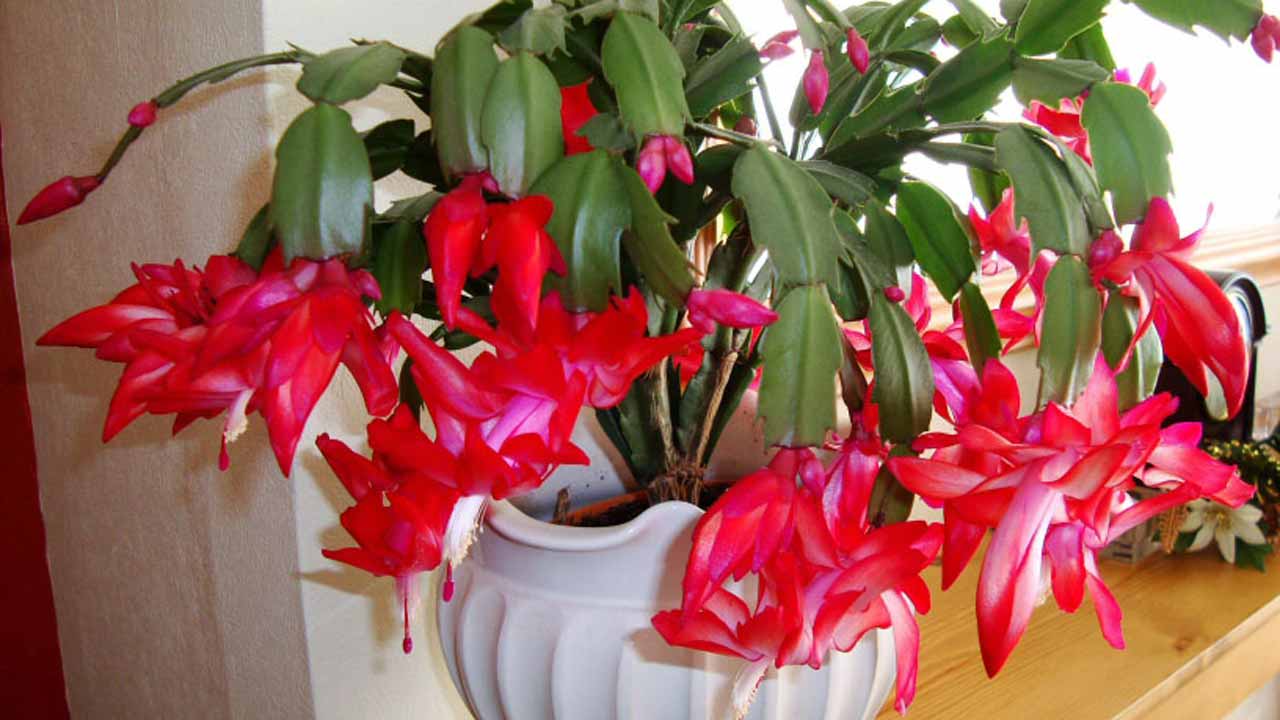 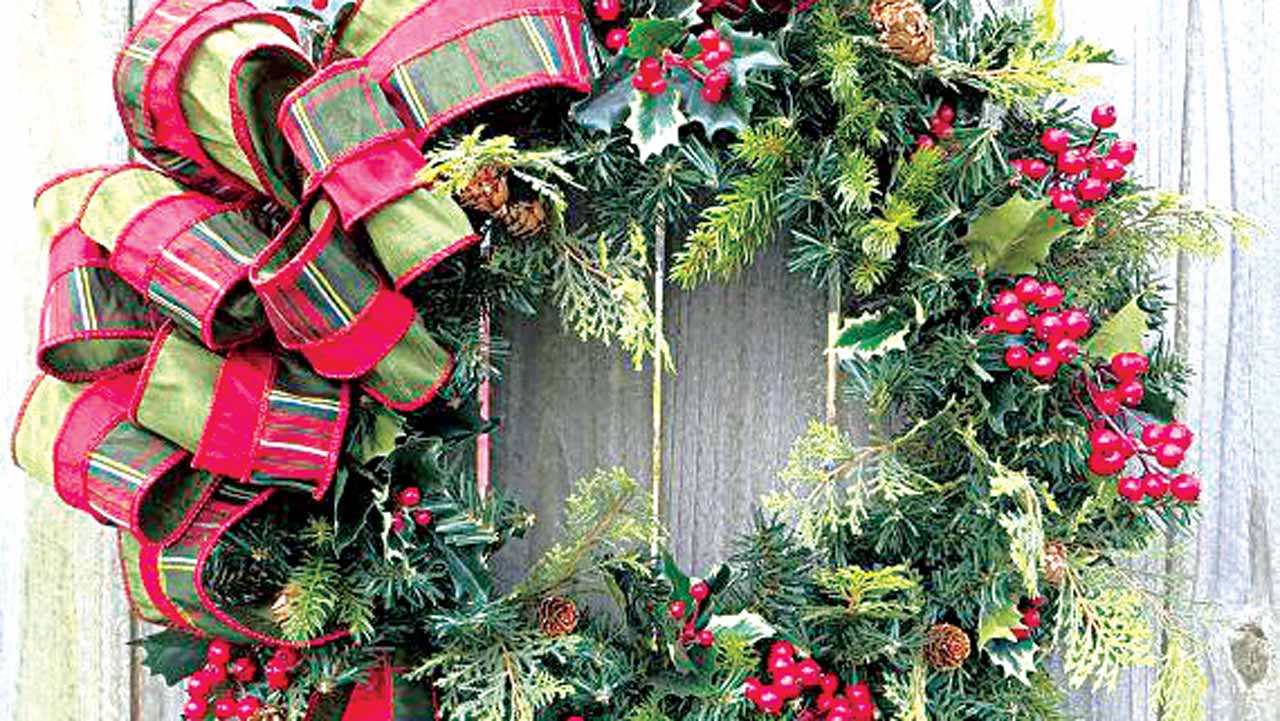 Plaid ribbons brings out the natural elegance of wreath with berries, holly and cedar foliage. 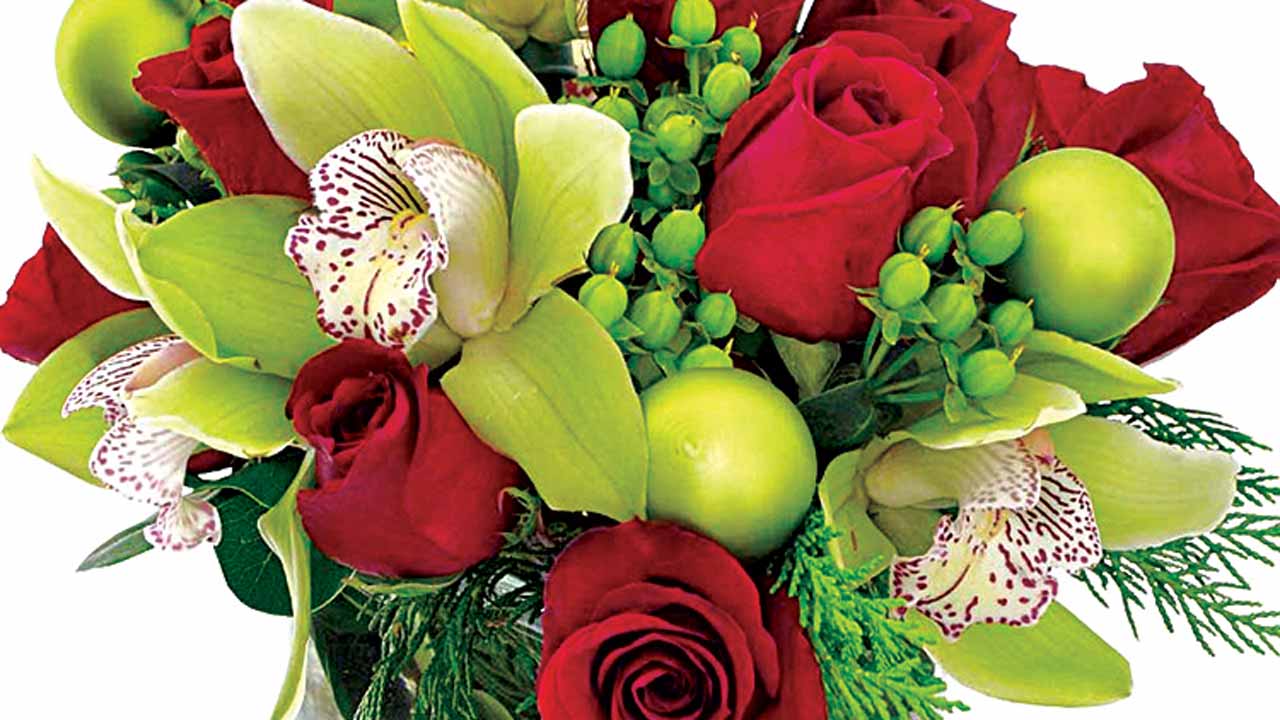 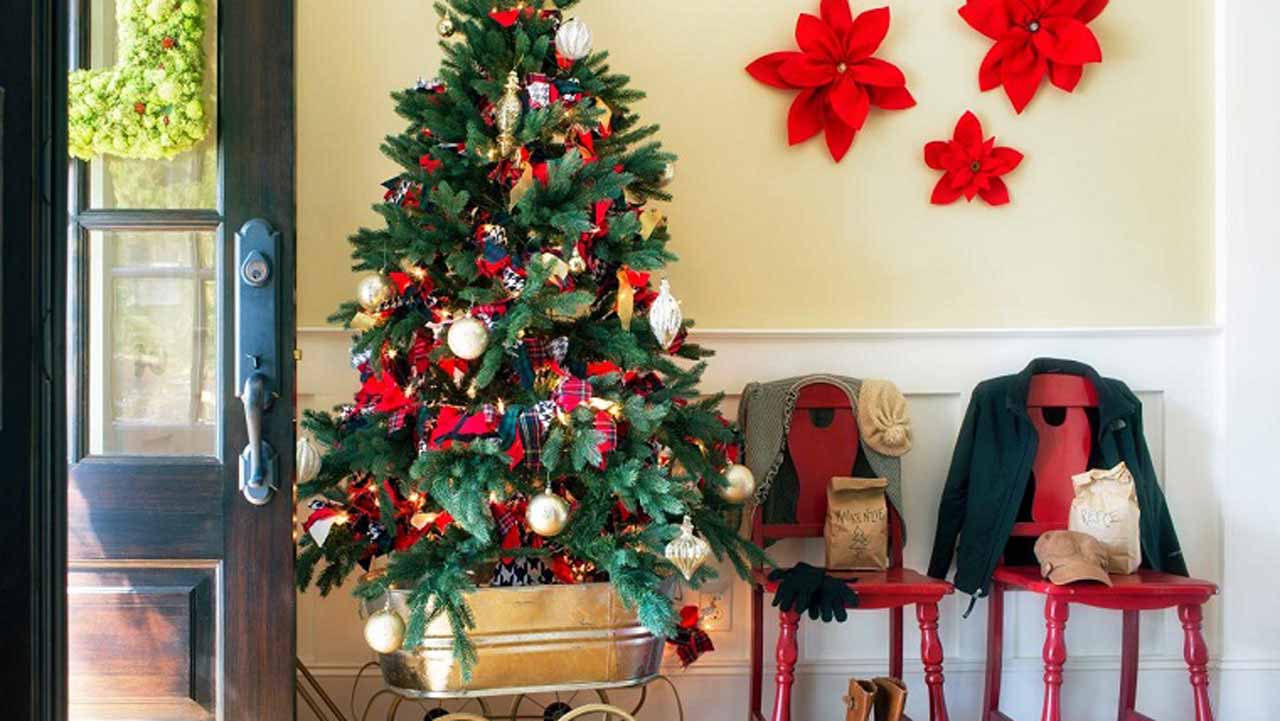 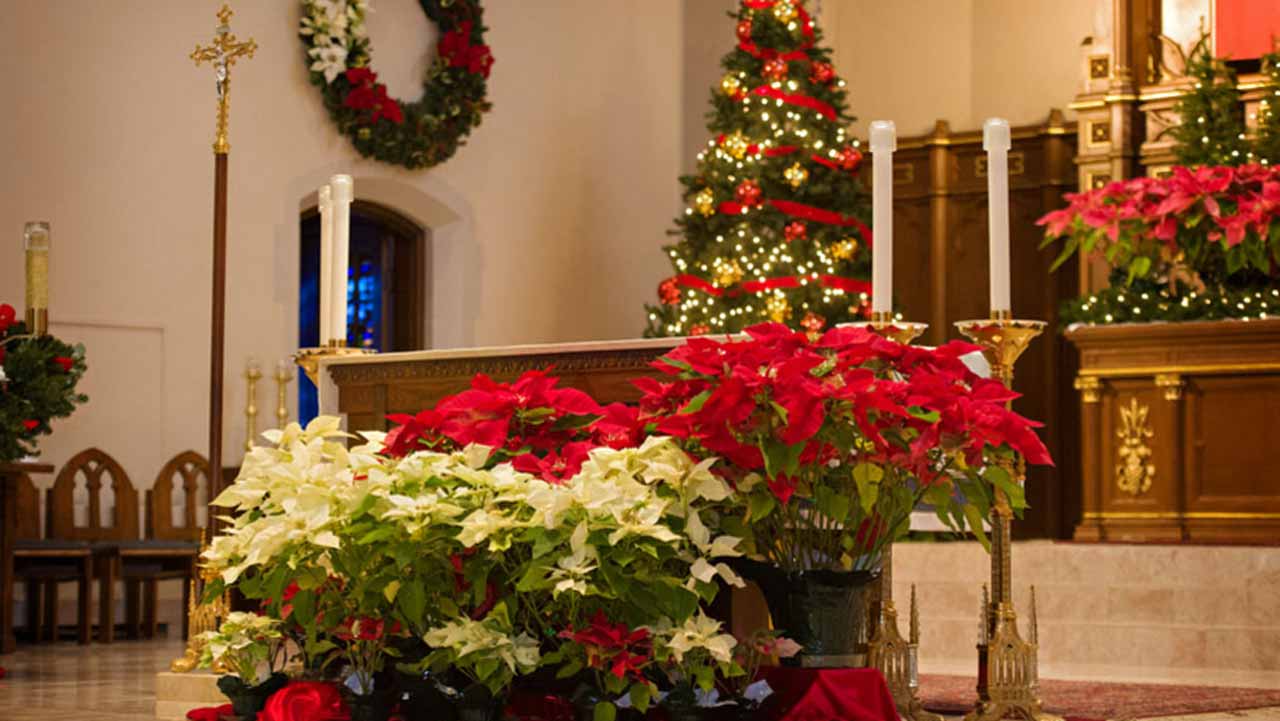 The season of gifts giving and merry making is here again and with it comes the joy of decorating our homes with things that make the occasion of occasions its merriest. One of the very common decorations that people never forget this festive season is the Christmas tree. Other than the classic Christmas tree, (firs, pines, spruce, balsam), there are other decorative plants and flowers associated with the season. Christmas plants are the various flowers or vegetation from garden plants associated with the festive season of Christmas. In many countries, seasonal plants that come to bloom during this period (usually from November to February). Don’t be surprised to hear that many Christmas plants such as Poinsettia, Christmas cactus, Christmas rose, Amaryllis are tropical plants- that’s why they are indoor plants in the Northern hemisphere. In Europe, most traditional Christmas plants are not so hardy except those that are natives such as the evergreen holly, ivy, mistletoe and the Christmas tree (pinus). There are many Christmas plants and flowers and traditions. It is for you to decide which flora you wish to incorporate into your house decoration during the festive season of Christmas.

Poinsettia (Euphorbia Pulcherrima spurge family) is a native to Southern Mexico where it is known as “Noche Buena”, meaning Christmas eve. The plants associated with Christmas began in Mexico 400 years ago. Now poinsettias are popular Christmas decorations in North America Europe and around the world. The red and green poinsettia is one of the most recognizable Christmas plants. They are unique in that the ‘flowers’ of the plant are actually the leaves called bracts and the flowers are in fact the small and inconspicuous beads found in the middle of the bracts. Poinsettias come in other shades like pink, white, yellow. In fact there are over 100 varieties, bright soldier-red is still the favorite and the one traditionally associated with the season.

Christmas trees: I don’t think you’ll forget this one; extremely popular tradition is decorating a tree (evergreen trees). The tradition originated in Germany, and spread everywhere in the 19th century. Various trees species are decorated around the world at Christmas time. Mostly conifers, an alternative in Central America is Balmea Stormiae known locally as Ayuque, a tree native to El Salvador, Quatemela, Honduras and Mexico. Ayuque has brilliant scarlet-red flower, which has long been a favorite of local people in areas where it grows. In New Zealand, the pohutukawa tree is often associated with Christmas, as its bright red flowers usually appear in December.
Christmas tree is also applied to a number of plants: Nuytsia Floribunda (Australian Christmas tree); fir, spruce, pine, balsam, casuarinas or other evergreen trees decorated for Christmas.

Holly (Ilex) is the plant most associated with Christmas in many European countries. Holly is found in wreaths hung on doors, pictured on cards, and sprigs of holly used to trim Christmas puddings. With its bright red berries and green leaves, few plants look as festive as holly. The origin of holly outlives Christianity, dating back to the druids who thought holly symbolized everlasting life. Christians adopted the plants as a symbol of Jesus’ promise of everlasting life. Ornamental holly berries are used in both wreaths and table centerpieces.

Ivy (Hedera)
Like most other Christmas flowers, ivy leaves symbolize eternity and resurrection. The Ivy leaf has been associated with the Egyptian god Osiris, and Greco-Roman god, Attis, both of whom were resurrected from the dead. For the Celtic ancestors in Britain, Ivy was the goddess who kept life going through the harsh winter months and holly was her god. The plant continued to be intertwined throughout history with the famous Christmas carol “The Holly and the Ivy” published in 1710. They are still together today as decorations.

Mistletoe has been a symbol of peace, love and goodwill. Mistletoe is a Christmas plant whose origin is said to date back to pre-Christian times. Druid pagan priests used this plant two hundred years before the birth of Christ in their winter solstice festival, when they used the foliage to ward off evil spirits, celebrate new growth, the ritual and tradition of hanging mistletoe around their homes. The plants have been associated with the Christmas period ever since and still used to decorate homes today. A more modern custom is to exchange kisses under a sprig of mistletoe, which continues today in many countries during the festive time. Just like the holly, which is poisonous to humans, you can kiss under them but not eat their berries. With more than 1300 species worldwide, they actually grow as parasites on the branches of the trees and shrubs. Ripe seeds burst and scatter, and when they land on a tree, they feed on it for nutrients and water. They stay green all year in cold climates. Its extract has been known to combat colon cancer.

Christmas Cactus ( Epiphyllum Schlumbergera Bridgestii)
Christmas cactus, also known as ‘orchid cactus’, blooms around Christmas its been popular since 1800s. Unlike cacti that grow in the desert, Christmas cactus actually grows in tropical rainforests. This means they thrive under bright indirect sunlight and humid conditions. Pendulous stems of Christmas cactus makes it a great choice for hanging baskets. The flowering houseplant has flowers that hang down like Christmas ornaments from the end of the leaves. It comes in a variety of colors, white, pink, orange-red, violet and yellow too. A new color that is popular is the golden one. This Christmas cactus has wide vaulted stems with the aspect of well knit leaves which flows and therefore you have to put it in pendent pot. They could reach 30-40cm. the leaves are the stems themselves.

Amaryllis (Amaryllis Bella Donna, “Harmattan lilies”) Amaryllis is another popular Christmas season plant. Tall and graceful, these beautiful bulb plants are typically used as a statement Christmas centerpiece. The plant comes in colors ranging from white to pink to orange and in varieties of patterns including ones resembling a Christmas candy cane.

Christmas Rose (Helleborus niger) is an evergreen perennial flowering plant in the buttercup family, Ranunculaceae. Although the flowers resemble wild roses (and despite its common name), Christmas rose does not belong to the rose family (Rosaceae). There are two subspecies: H. niger niger as well as H. niger macranthus, which has larger flowers (up to 3.75in/9cm across). Helleborus can be rhizomatus, herbaceous or semi-evergreen perennials forming a clump of basal leaves, or evergreen with erect leafy stems. Large bowl-shaped flowers are borne in loose clusters. The plant range is Europe, southwest Asia. A vase brimming with white and red roses wonderfully scented blooms makes for a gorgeous festive display, especially when teamed with gold folage. Other plants known as Christmas rose also includes a species of hydrangea, hydrangea macrophylla; Serissa foetida (also known as “snow rose”) are originally from tropical regions of Asia. Cultivated serissa often blooms during Christmas seasons.

Chrismas Orchids
These Orchids are specifically given this name because they blossom during the Christmas season. Orchids have also been long used to decorate traditional floral arrangements and other Christmas decorations such as table centerpieces and wreaths. The Christmas Orchids Phalaenopsis Orchids star of Bethlehem blossom exactly every December and gets it name because of its star-shaped flowers. The flowers start off green but eventually turn out white with tones of light green. The variety of Orchids never ceases to amaze. Orchids add a contemporary twist on a more conventional floral arrangement. Orchids are striking and their exotic blooms adding a sophisticated accent to any interior design. The Christmas season is time for beauty and good cheer and nothing helps bring beauty and good cheer like beautiful flowers for Christmas. Have a Merry Christmas!