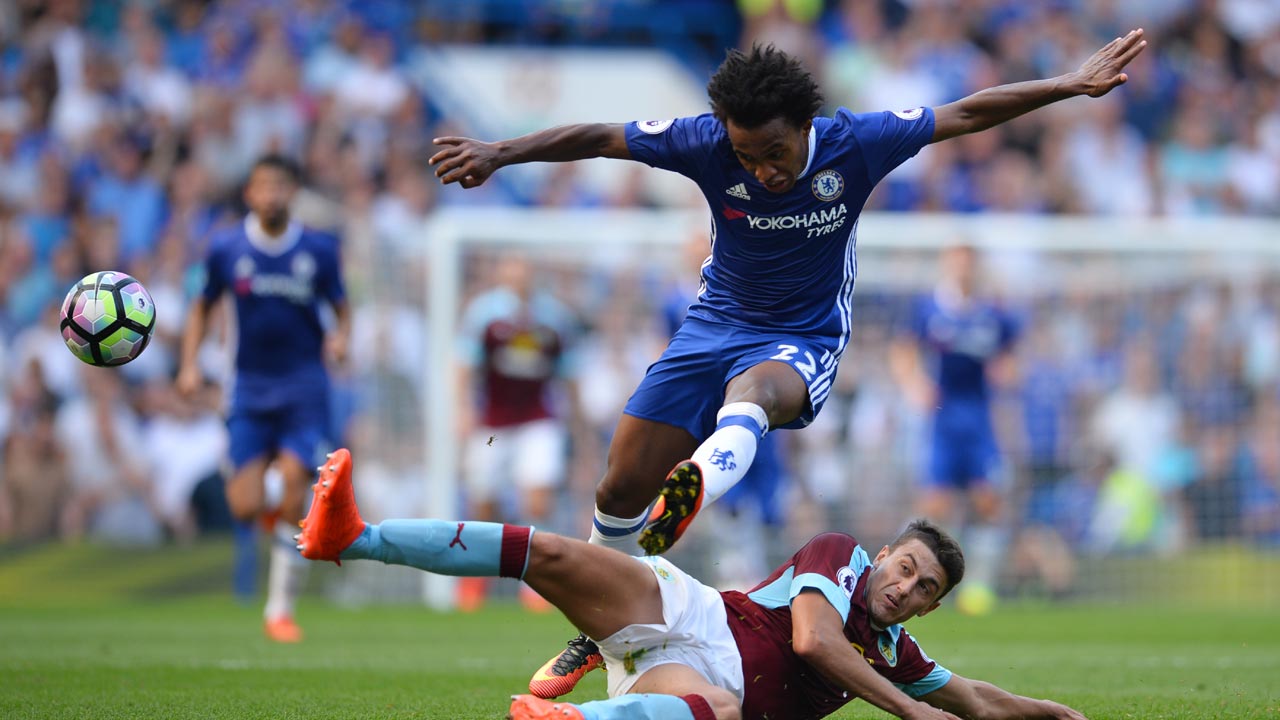 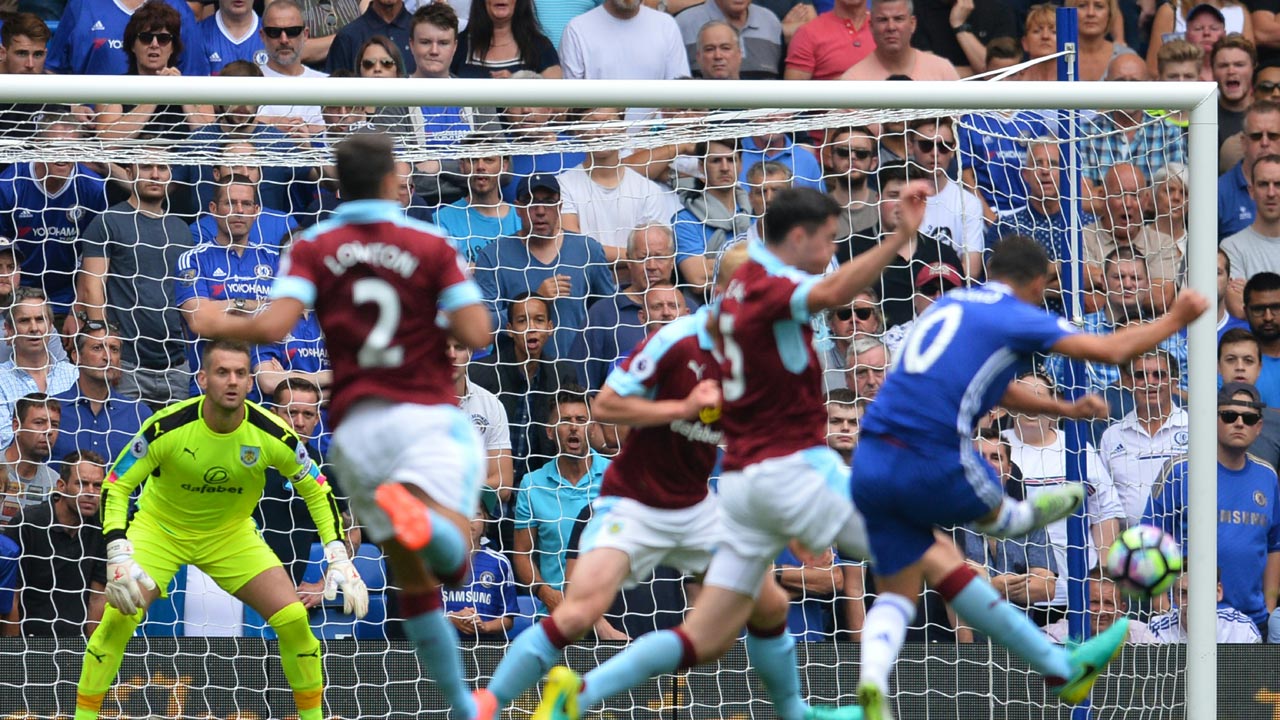 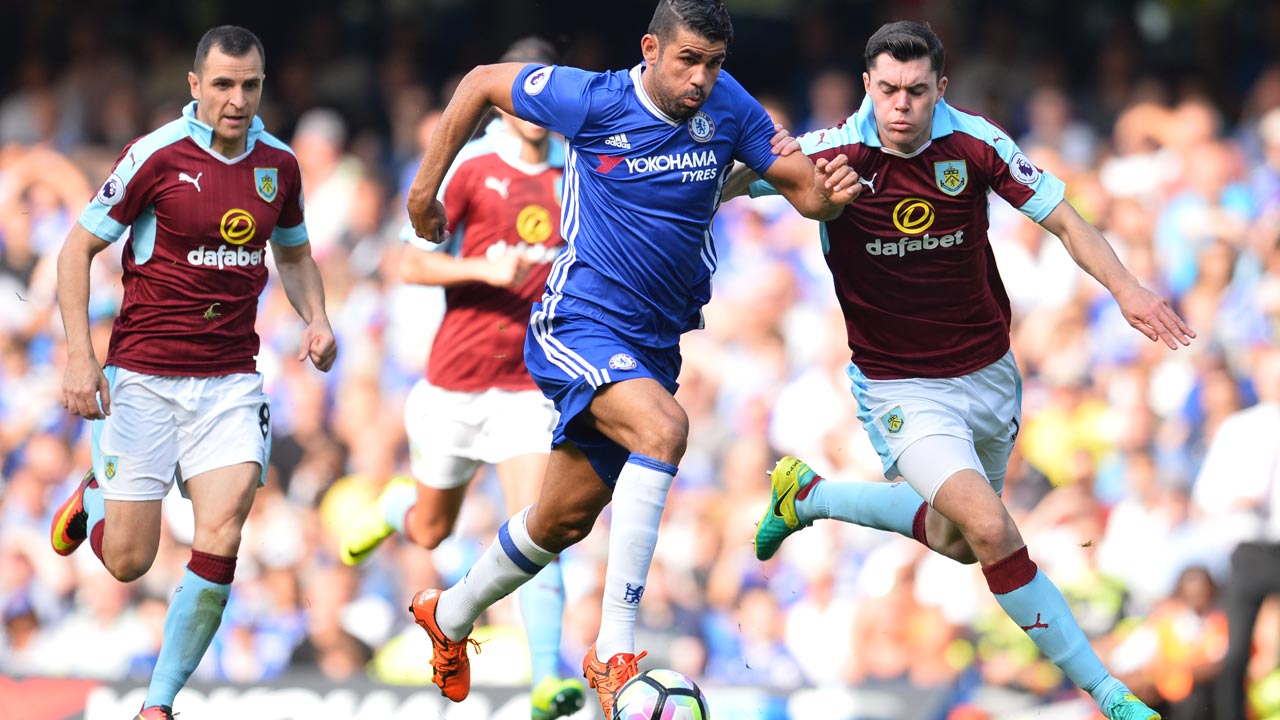 Antonio Conte has won his first four games as Chelsea manager after Eden Hazard’s sublime strike inspired a comfortable 3-0 victory over Burnley to leave his side top of the Premier League on Saturday.

Former Italy coach Conte needed Diego Costa to score in the closing moments of his first two games in England to secure three points but there was never any need for that kind of late drama at Stamford Bridge this time.

Burnley, newly promoted from the Championship, hadn’t won a league game at the Bridge for 45 years and from the moment Hazard scored after only nine minutes Chelsea were in the ascendency.

Willian doubled the lead before half-time and the only surprise was that, despite dominating the entire game, Chelsea weren’t able to add to that lead until substitute Victor Moses struck in the 89th minute as they produced their first clean sheet of the season.

Belgian striker Michy Batshuayi, who scored twice in Chelsea’s EFL Cup victory over Bristol Rovers in midweek, returned to the bench as Diego Costa came back in, Willian was included after recovering from a calf injury and there was no place at all for Cesc Fabregas.

The former Arsenal midfielder has not started a league game for the Blues so far this season and was left out of the Spain squad this week, prompting further speculation about his future.

Conte’s team selection was not a matter of debate for long, however, because Chelsea went ahead early on with a wonderful goal from a revitalised Hazard.

The Belgian picked the ball up in space just inside the Burnley half, ran unchallenged at the away defence and steered an accurate right-foot shot into the opposite corner of the net from the edge of the penalty area.

It was Hazard’s sixth goal in his last eight Premier League games – and having scored only six in 44 before that it may well be evidence that he is heading back to the kind of form which made him Footballer of the Year in England in 2015.

It was also a crucial goal for Chelsea bearing in mind Burnley had beaten Liverpool a week earlier despite enjoying only 19 per cent of possession.

Willian, however, was more ruthless in the 42nd minute, drilling a shot accurately across Heaton from the right-hand side of the penalty area.

Chelsea really should have extended that lead after 57 minutes when a clever corner routine saw Hazard’s unchallenged volley superbly saved by Heaton and John Terry somehow blazed the rebound over the bar.

The excellent Hazard also fizzed a left-foot shot narrowly over and then saw a low drive well saved at the end of a flowing move which was begun deep his own half by N’Golo Kante, who enjoyed another excellent game in midfield.

It took Burnley until the 72nd minute for the visitors to even win a corner and it was only in the final stages that they made Chelsea sweat.

However, a pair of late substitutions, Pedro and Moses coming on, capped Chelsea’s afternoon, with the former sweeping a ball across the box for the latter to slide home just a minute from time.

The result means Conte, who joined Chelsea after leading Italy to the Euro 2016 quarter-finals, has yet to taste defeat in England as his team go into the international break.

There is no excuse for rape
18 mins ago  Youth Magazine
Olatunde Makanju: Sportsman, teacher, sports psychologist, and sports administrator at 70
24 mins ago  Sport
Six Nollywood leading men still hitting right notes at 60 plus
35 mins ago  Saturday Magazine
You have a choice here…
36 mins ago  Relationships
Salako-Kupoluyi, five others share sexual molestation story in new book, free
37 mins ago  Issues