After coronavirus: Will the Church still be the same?
1 day ago  Sunday Magazine
1 of 10 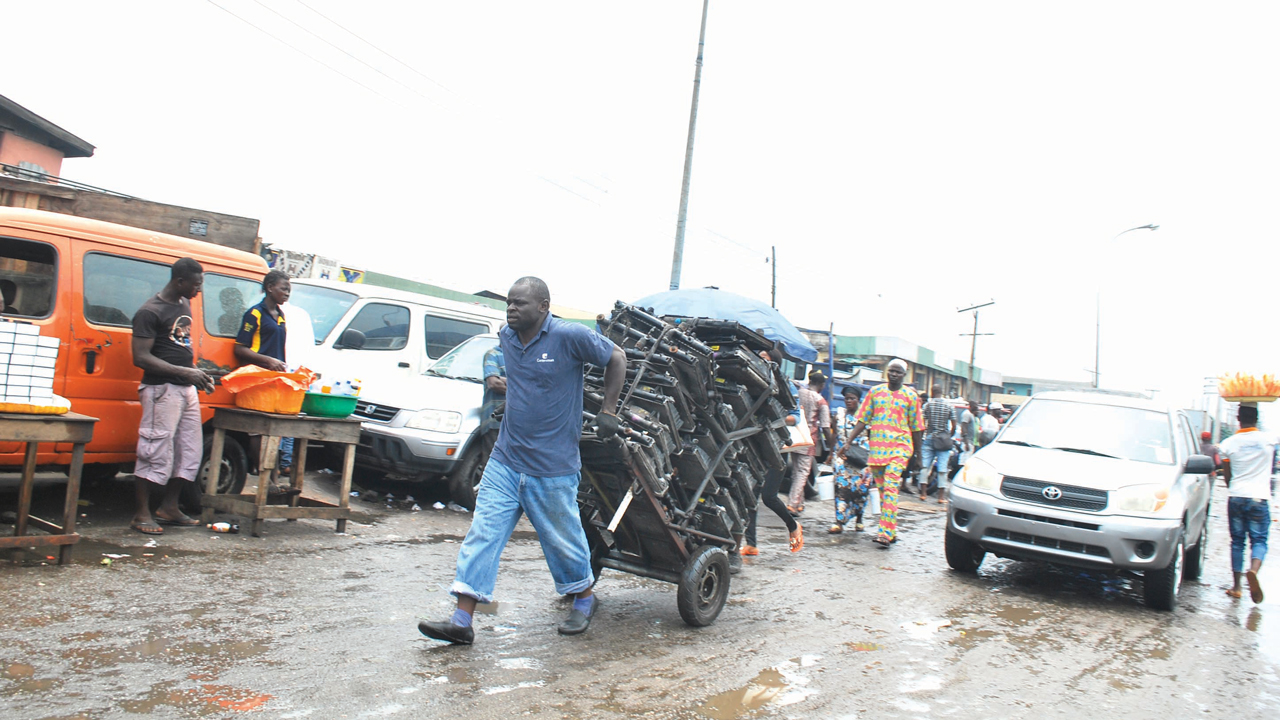 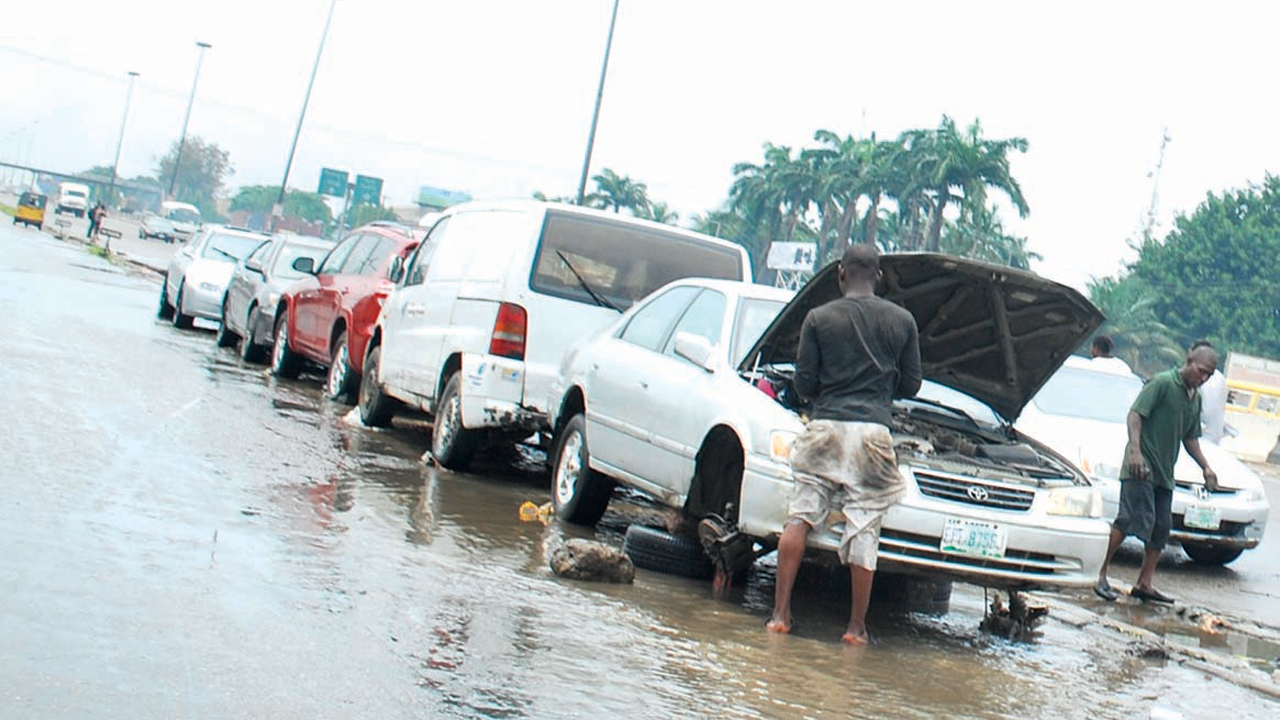 A mechanic repairing a vehicle right on the service lane 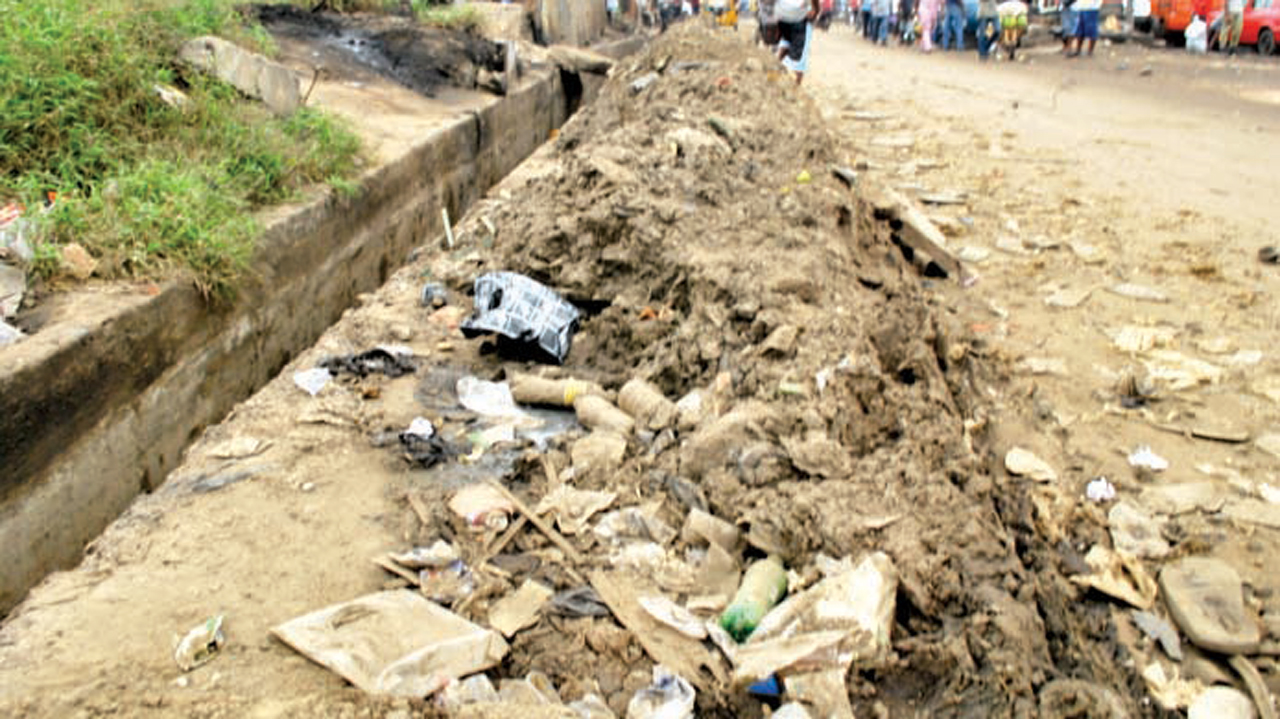 Debris from the gutter left on the pedestrian walkway

Residents and road users within and around Ladipo Auto Spare Parts Market, in Mushin Local Council of Lagos State, have continued to deplore in very strong terms, the incessant traffic gridlock occasioned by the deteriorating state of the road, and the abhorrent activities of traders and artisans in the market.

Not only do the traders and artisans have gross lack of respect for other road users, the unending abuse that roads within and around the market are subjected to, leads to the emergence of potholes, which soon widen to become craters, soon after every round of rehabilitation.

The traffic gridlock experienced around the market, which motorists sometimes spend hours to cover a distance as short as 200 metres, has multiple contributing factors.

For instance, the service lane of the Oshodi/Apapa Expressway (Toyota Bus Stop axis) constantly plays host to a battery of fruit sellers, headlamp/trafficator repairers, vulcanizers and other such people.

With this scenario in place, when the massive container-bearing trucks arrive from the wharf, swift movement becomes cumbersome and near impossible.

Matters are also worsened anytime debris are exhumed from the gutters, as they are left on the pedestrian path, a development that further narrows down available space for road users.

Outraged at the chaos in the market, the Lagos State government has on a number of occasions, made efforts to return sanity to the place, and restore law and order, but all to no avail.

Measures taken in the past, which range from shutting down the market for lengthy periods, to compelling the traders to clean it up, and attempting to ease the traffic with security personnel, have all failed woefully.

On a bad day, especially after a heavy downpour, driving down to Rutam House, corporate home of The Guardian and other offices along that corridor, which should take less than two minutes from Charity Bus Stop under normal circumstances, takes over an hour, on the severely abused service lane.

Policemen stationed around to help matters and maintain law and order, have become an addition to the problems, as some of them now allocate parking lots to shoppers and motorists who want to fix their vehicles, for a fee.

Of late, articulated vehicles heading for a biscuit company, located within the neighbourhood, also contribute their quota to the challenge, as they are parked by the roadside for plenty hours without any explanation. These trucks further add to worsening the traffic situation on this stretch of the road.

A motorist, Mr. Nurudeen Bello, expresses disappointment at government’s failure to take a firm stand on returning sanity to the market.

He said whatever revenue the government may be getting from the market, the comfort of other road users should never be sacrificed for that of the traders.

Another aggrieved motorist is peeved by the impertinent behaviour of some cargo owners and operators in the market, whose consideration for other road users is usually near zero, when they are in their element.

“I pass through a section of this market daily, and I am deeply pained by the way other road users are treated by the traders. If they are offloading goods from a container and another huge truck is coming on the other lane, they have the effrontery to tell you to veer into the expressway from the service lane simply because they have no consideration for other road users.

“Ok Biscuits is also not helping matters because some trucks that are either bringing in materials to the company, or those carting away their products usually park on the road side for hours. This apart from further worsening the traffic situation, also remains a serious threat to the road,” he stated.

He charged the government to rid the neighbourhood of mounting vehicle scraps, and not to relent in efforts to return sanity to the market, as it furthers its transformation into a smart city.

“If the state government fails to find a permanent cure for this menace, then its claims of being a smart city do not hold water because as matters stand, Ladipo Market makes nuisance of that claim.

“Most times, where there is serious uproar about the condition within and around the market, government agencies just mobilise there, do a little and then walk away while such situations largely remain. Officials of LASTMA frequent the market, but no matter the number of vehicles parked on the road, none gets towed away, giving the impression that the LASTMA officials have been settled.”

President, Ladipo Market Central Committee, Mr. Kinsley Ogunor, in a telephone interview, lamented that efforts to rid the service lane of the Oshodi/Apapa Expressway, have been unsuccessful, as the prevalent hardship in the country is still forcing artisans to convert parts of the road to mechanic workshops.

“Even though it is Saturday, and I am not in the market, but I have mandated those operating there not to be parking vehicles on the side bordering the expressway. Sadly, the current hardship in the country is not helping matters, and that is why some of these problems cannot be completely eradicated. As a group, we will continue to do our best to ensure that sanity returns in the market.

While calling on the government to impress the appropriate agency to take the issue of sanitation serious, he said the refuse generated in the market if not promptly carted away, spills into the road and further worsen the traffic situation.

“Government should take the issue of packing refuse away from the market serious because apart from affecting the free flow of traffic, it is not also good for the health of my members. LASTMA also has to be serious with doing its job around here because I can tell you that they are not serious with it.”

On the issue of his members using sanitation period for religious services, he said that would soon come to an end because “during our last meeting that matter came up. Those that do that have been warned to desist. We are pressing on with the warning, but if they fail to comply, we would have no other option than to apply appropriate sanctions.