When Afe Babalola brought Ooni, Alaafin and Ogunsua to dance of peace

By Muyiwa Adeyemi (Head South West Bureau Ibadan)
Share on Facebook Share on Twitter Share on WhatsApp Share on Telegram
The meeting of the monarchs was instructive and historical. The Alaafin of Oyo had not set his foot into Ile-Ife, believed to be the source of Yorubas, in the last 50 years.
1 of 10 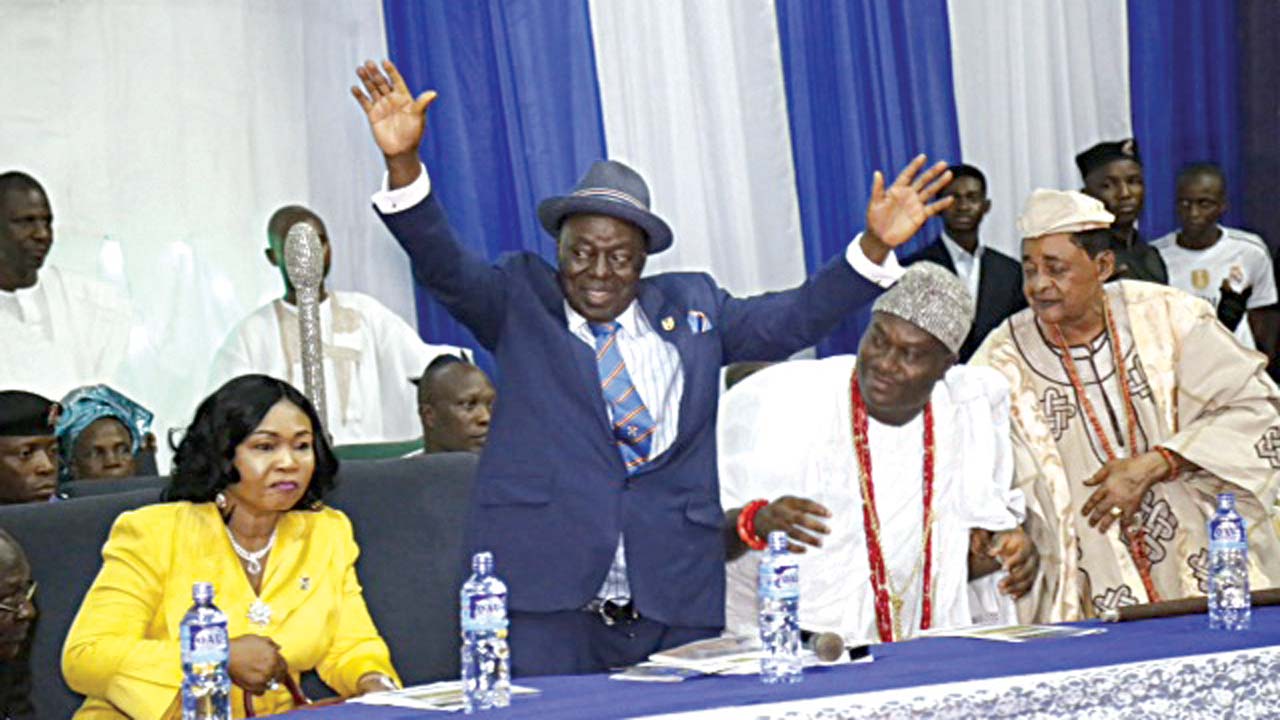 Afe Babalola and wife (left) with Ooni and Alafin 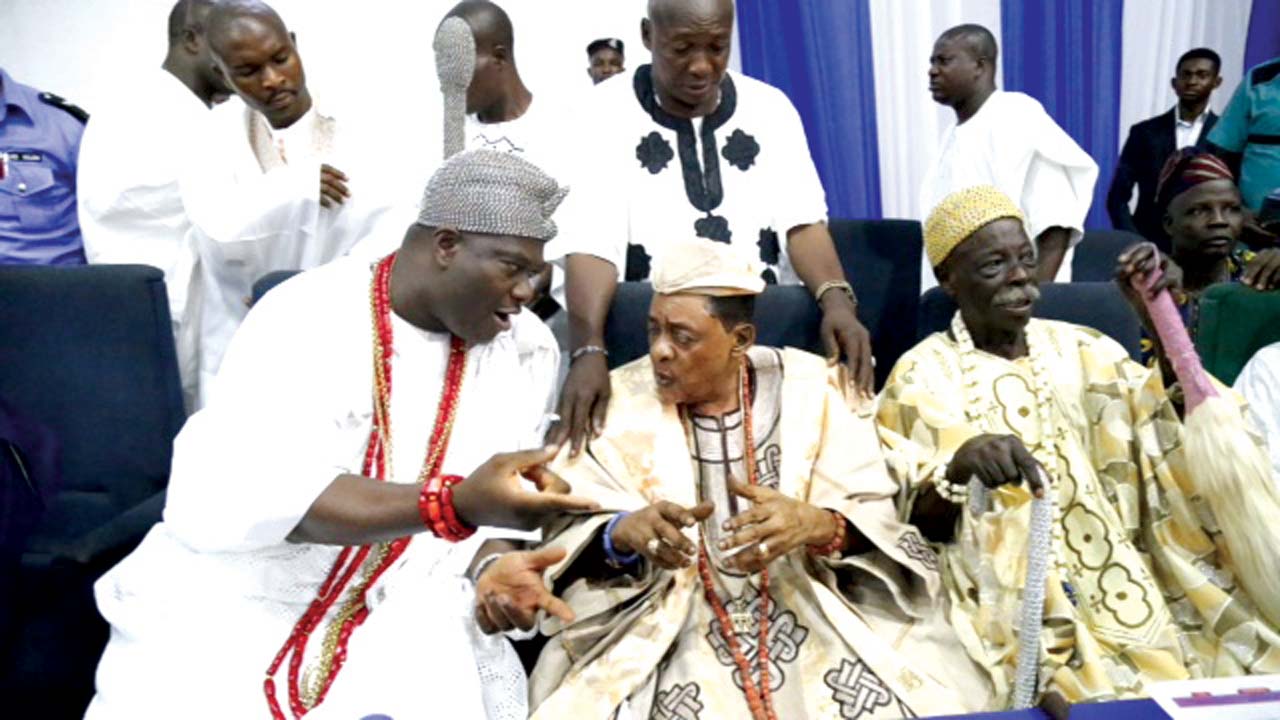 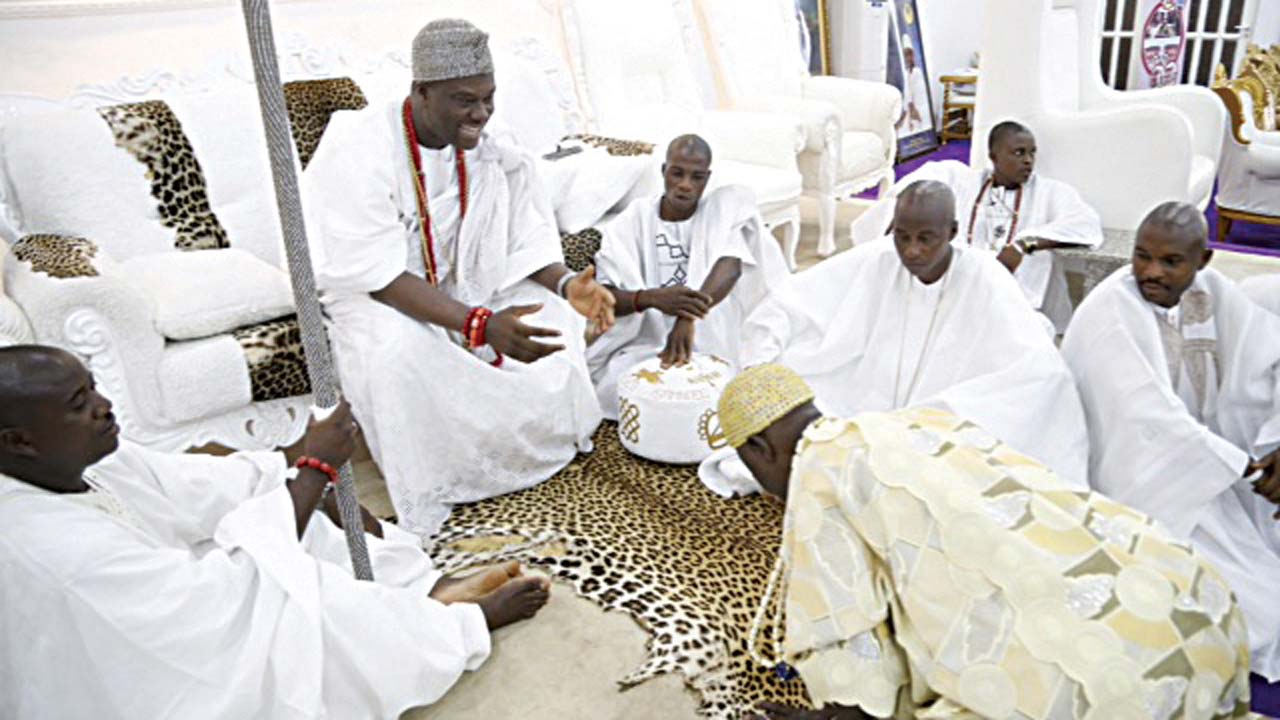 Ogunsua of Modakeke paying homage at Ooni’s palace
The Aare Baamofin of Yoruba land, Afe Babalola (SAN) has made several historical moves to reconcile various warring communities and monarchs in Yoruba land, but many will not forget in a hurry his recent success to bring Alaafin of Oyo, Oba Lamidi Adeyemi to Ile Ife to exchange banters with the Ooni of Ife, Oba Enitan Ogunwusi.

Afe Babalola had been invited to the Obafemi Awolowo University (OAU), Ile Ife, to deliver the 2017 edition of the Annual Lecture of the Faculty of Education, and to receive award for what the organisers described as his “Exemplary contributions to Nigerian education.”

But the founder of the highbrow Afe Babalola University Ado Ekiti (ABUAD), saw it as an opportunity to bring together the two leading Yoruba monarchs under the same roof and discuss issues of common interest, especially the need for unity among traditional rulers in Yoruba land.

The meeting of the monarchs was instructive and historical. The Alaafin of Oyo had not set his foot into Ile-Ife, believed to be the source of Yorubas, in the last 50 years. Expectedly, the ovation that greeted the Alaafin’s arrival from the over 5,000 seated guests at Oduduwa Hall of the OAU was deafening. The drummers did not only display the rich culture and tradition of Yoruba land, but also entertained guests with their dexterity at the talking drums, which only Yoruba or those familiar with that culture can understand and appreciate.

Indeed, Oba Adeyemi and former Ooni, the late Oba Okunade Sijuade were at dagger-drawn throughout the lifetime of the latter, as both of them were embroiled in supremacy battle. But right from the day he was enthroned, the current Ooni had declared that he was not ready for such a battle, which he reasoned would not move the Yoruba nation forward.

The OAU event was not the first time Ooni Ogunwusi and Alaafin would meet. In January last year, the Ooni had visited his brother Oba, the Alaafin of Oyo, the first of such in 79 years, thus thawing the nearly five decades of icy impasse between the two powerful and leading thrones in Yoruba land.

He had equally extended a hand of friendship to other Yoruba Obas, as he visited Oba Sikiru Adetona, the paramount ruler of Ijebu land, the Alake of Egba land, Oba Adedotun Gbadebo, the Owa Obokun of Ijesaland, Oba Adekunle Aromolaran, the Ogunsua of Modakeke, the Ewi of Ado-Ekiti and the Ajero of Ijero-Ekiti, as well as the Alara of Aramoko-Ekiti, among many others, while preaching his gospel of peace and unity, emphasising the benefits of cooperation and collaboration, instead of supremacy battle.

First to speak after Babalola had delivered his well-received and thoroughly applauded lecture was the Ooni of Ife, who was dressed in his now ubiquitous all-white raiment. The royal, who emphasised the need for peace and harmony in Yoruba land to accelerate its development, called for collaboration and cooperation instead of the age-long competition, which has not yielded any positive result.

Amidst songs, Ooni Ogunwusi declared that all is now well in Yoruba land. He noted that the Yoruba race, which has been one, would continue to be together and speak with one voice in the interest of its people and their development.

He said: “I sincerely welcome Alaafin, Iku Baba Yeye, to Ile Ife. You are at home. Your presence delights us and clearly displayed that Yorubas are now one and ready to forge ahead in unity for the progress of our people.”

The Ooni profusely thanked Afe Babalola for being a leading light and peacemaker in Yoruba land. “Aare Afe Babalola is a special creation of God,” he said. “I was marvelled, when I went to his university last year. His passion for quality education is commendable. He is a good man, and I am looking forward to returning to that university, when he will be commissioning the teaching hospital later in the year. Let’s thank God for giving us someone like Aare Babalola in Yoruba land.”

Probably unknown to the drummers from Ife palace, the Alaafin clearly understood the message and rhythm from their talking drums, which was a direct opposite to the new-found love and peace between the monarchs. The message from their talking drums did not only deride the Alaafin, but was still claiming that Ooni will forever remain superior to all monarchs in Yoruba land, to which Alaafin responded, when it was his turn to address the group of intelligentsia, students and business moguls that graced the occasion.

Oba Adeyemi made all to understand that all traditional rulers are important in their domains and warned the drummers to embrace peace and stop causing unnecessary confusion among people. To him, the attitude of the drummers was a clear testimony that the tail does not know what the head is doing. He said the time has come for all traditional rulers in Yoruba land to put behind them acrimonies of the past and work together in peace and love for the development of Yorubas in Nigeria and in the Diaspora.

But the drummers from Oyo that are renowned for their expertise in talking drums retaliated after the event and it was the monarchs’ quick departure from OAU that ended the talking drum wars between the drummers of the two palaces.

But the historic event did not start with the OAU gathering. Afe Babalola, accompanied by his wife Modupe and top management staff of the ABUAD led by the Vice Chancellor, Prof Michael Ajisafe, had earlier paid a courtesy visit to Ooni in his palatial abode with the Ogunsua of Modakeke, Oba Francis Adedoyin.

Babalola told Ooni that he specifically visited the palace in the company of Ogunsua and a retinue of Modakeke chiefs to celebrate the peace that is existing in the town after the crisis that saw many killed and properties razed.

He said: “I recall the dark days of wanton killings and destruction of property in Ife and Modakeke between 1989 and 1990, as a result of which I became the lawyer of Modakeke communities. Today, to your credit, the Ogunsua of Modakeke is here in your royal court. This is conclusive evidence that your efforts of uniting the people are yielding results

“But there are still some disputes and grumblings among a few people in Ife and Modakeke over farm lands. I implore your majesty to look into and resolve them.” The foremost traditional ruler of the Yoruba source promised to look into those grey areas and proffer solutions.

The Ooni and Ogunsua did not only exchanged banters, but also danced to the songs led by the Ooni that never will the two communities fight themselves again. After clearing his voice and asking everybody to stand up and dance with them, the Ooni raised Ogunsua’s hand, while leading a song, “Ore la o ma se, ore la o ma se, awa o ja mo o, ore la o ma se,” which literally means (We shall forever be friends, never shall we ever fight ourselves again).

It was truly an emotional moment to see the Ife and Modakeke chiefs holding themselves to dance and pose for photographs.

Politics
2023: Female aspirant urges APC to heed First Lady’s appeal on 35% affirmative action
4 mins ago
Mrs Ann Agom-Eze, a female senatorial aspirant on the platform of the All Progressives Congress (APC), Ebonyi chapter has urged the party to support aspirations of female politicians in the party.
Nigeria
Court says Jonathan eligible to contest 2023 presidency
5 mins ago
The Federal High Court sitting in Yenagoa has ruled that former President Goodluck Jonathan is eligible to contest the 2023 presidential election. The Judge, Justice Isa Hamma Dashen, gave the judgement on Friday. He also held that Jonathan’s right to vie for the office of president again cannot be stopped by any retroactive law. Jonathan…
Guardian Life
Kizz Daniel Crowns One Year Old As Buga Challenge Winner
6 mins ago
Oluwatobiloba Daniel Anidugbe, better known on stage as Kizz Daniel, a Nigerian musician and songwriter, has crowned Chionye Elvira, a one-year-old Tik-Toker, as the winner of his #BugaChallenge. The 'Woju' singer revealed this on his verified Instagram account. He wrote on his verified Instagram page, “BASED OFF ON ENGAGEMENT, HERE IS THE WINNER OF OUR…
Features
Race to Bitcoin (BTC) superiority: Sanzooz Finance (SZFT) and Mobox (MBOX)
25 mins ago
Bitcoin (BTC) has long ruled the crypto industry having become the first-ever cryptocurrency after launching in 2009.
Features
Chronoly (CRNO) tokens attract attention from Helium (HNT) and KuCoin (KCS) investors
35 mins ago
Both Helium (HNT) And KuCoin (KCS) have seen massive adoption in recent times. They are among some of the most successful projects in the crypto ecosystem. They have different but exciting use cases and are backed by reputable individuals. As the crypto market is volatile, investors are constantly on the lookout for valuable projects they can include in their portfolios, and that's why they are jumping ship to join the Chronoly (CRNO) bandwagon.

Features
Ooni honours IITA boss Sanginga over contributions to agriculture
17 Dec
The Ooni of Ife, (Dr) Adeyeye Enitan Ogunwusi Ojaja II, has conferred a traditional title, the Aare Afurugbin-Ola of the Source, on the outgoing Director-General