By APO Group
The African Union Mission in Somalia (AMISOM) joined Nigerians serving in the horn of Africa nation to celebrate their country’s 61st independence anniversary.  Nigeria attained independence on 1st October 1960 from Britain. The event to celebrate the Independence Day was held at the AMISOM Recreation Centre (ARC) and was led by Assistant Commissioner of Police (ACP) Anthony… 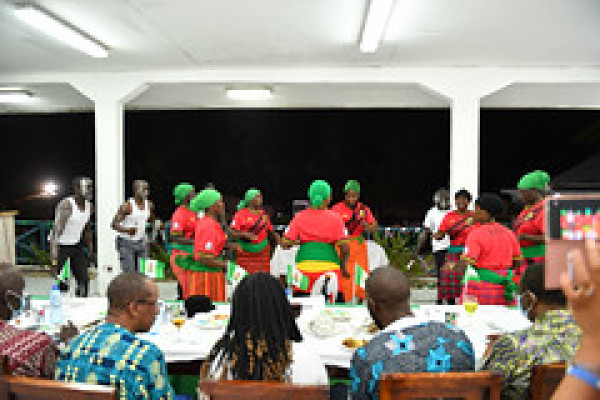 The African Union Mission in Somalia (AMISOM) joined Nigerians serving in the horn of Africa nation to celebrate their country’s 61st independence anniversary.

Nigeria attained independence on 1st October 1960 from Britain. The event to celebrate the Independence Day was held at the AMISOM Recreation Centre (ARC) and was led by Assistant Commissioner of Police (ACP) Anthony Placid.

Members of the AMISOM Senior Leadership Team led by the Special Representative of the Chairperson of the African Union Commission (SRCC) for Somalia, Ambassador Francisco Madeira and Mogadishu’s Abdiaziz District Commissioner, Rowdo Cabdi Cali were also present durirng the event.

Ambassador Madeira commended Nigeria for being part of AMISOM and also for having played a key role in the liberation struggles of many African countries on their journeys to attain independence, and for being among the nations that founded the Organization of African Unity (OAU), which later became the African Union, under which AMISOM operates.

“It is with a sense of pride that I participate in this ceremony, the reason being that Nigeria is one of the founding fathers of the OAU, and since then, Nigeria has played a pivotal role in advancing the ideals of our continent,” Ambassador Madeira said.

World
Fugitive businessman close to Venezuela's Maduro extradited to US
12 mins ago
A fugitive businessman accused of acting as a money launderer for Venezuelan President Nicolas Maduro's regime was extradited Saturday
Nigeria
State Congress: APC adopts consensus option in Sokoto
25 mins ago
The All Progressives Congress (APC) in Sokoto State on Saturday adopted consensus option to elect the 36 state executives of the party.
Saturday Magazine
Interest, passion key to success of KenMoore Fashion, says founder O.K. Chukwuma
28 mins ago
Ogbonna Kelvin Chukwuma, the founder and CEO of one of Nigeria’s foremost fashion brands, KenMoore Fashion, has attributed the success story of KenMoore Fashion to how he painstakingly built the business with the interest he had on what he was doing, and the passion to succeed. "At a tender age, during my apprenticeship in the…
Nigeria
El-Rufai tasks APC officials on excellent leadership in Kaduna State
32 mins ago
Kaduna State’s Gov. Nasir El-Rufa’i on Saturday tasked newly-inaugurated state officials of the All People’s Congress (APC)
World
Grand Mosque in Mecca drops social distancing
1 hour ago
The Grand Mosque in the Muslim holy city of Mecca in Saudi Arabia operated at full capacity Sunday, with worshippers praying shoulder-to-shoulder