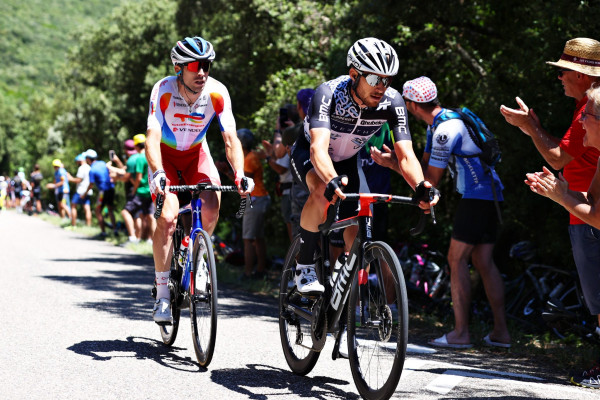 Mark Cavendish (Deceuninck-Quickstep) won stage 13 of the Tour de France, sprinting to the win in Carcassonne.

Stage 13 of the Tour de France was another long transitional stage, covering 220km of the Southern France countryside. The stage got off to another fast start with a number of riders again looking to make the break.

Team Qhubeka NextHash were once again very active and were rewarded for their efforts when American, Sean Bennett made the break of the day. Only two other riders joined Bennett on the attack, and so it was set to be a long and hard day under the baking sun for the trio.

They managed to force open a lead of 4-minutes at one point but the peloton easily had the gap under control. With a bit of wind about from 60km to go some attacks began in the peloton.

These accelerations quickly brought back the the three escapees and created some nervousness in the peloton, as nobody wanted to be caught out in echelons. A crash in the peloton created a small split, fortunately no Team Qhubeka NextHash riders went down.

Coming into the sprint, Max Walscheid was battling for position up at the head of the race for the final 20km. Deceuninck-Quickstep being the only team with a sprint train in the race, were in total control though. The finale was somewhat technical but that didn’t stop their sprinter, Cavendish, from taking another stage win, his fourth of the race.

Walscheid would finish as our best placed rider on the stage, crossing the line in 14th place after suffering a mechanical in with approximately 1.5km to go.

It’s a bit frustrating to get into the break and then only be three of us. We knew beforehand that it was 50-50 if they would let a big break go up the road and it sticks to the line or something like today happens where there’s just three of us and there’s really no chance. I tried to make the best of it and a long, fun day in the end.

There’s still a week left of the race and there’d better be something left in the tank, I’m now just going to recover for the next days and then see what we can do in the next week.

I want to thank everyone for all of their support. I really miss my family and friends back home but thank you for everything.