By APO Group
Share on Facebook Share on Twitter Share on WhatsApp Share on Telegram
The Rugby Africa Cup Repechage (www.RugbyAfrique.com) which kicked off on June 5 saw three competing teams: Burkina Faso, Burundi and Cameroon, completing the round robin tournament yesterday at the Aout 4 stadium in Ouagadougou. The Stallions of Burkina Faso defeated the Indomitable Lions of Cameroon by of 17 to 13 points. After Ugandan referee Ms… 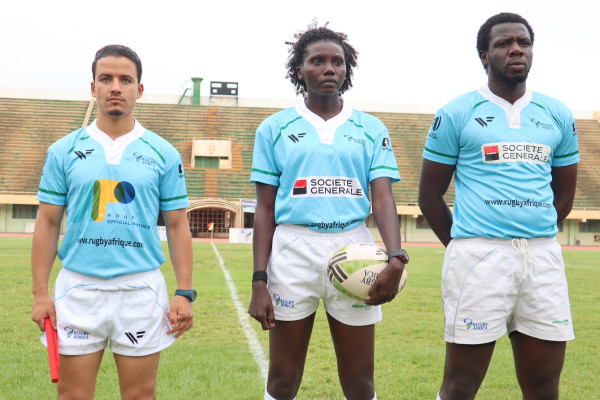 The Rugby Africa Cup Repechage (www.RugbyAfrique.com) which kicked off on June 5 saw three competing teams: Burkina Faso, Burundi and Cameroon, completing the round robin tournament yesterday at the Aout 4 stadium in Ouagadougou. The Stallions of Burkina Faso defeated the Indomitable Lions of Cameroon by of 17 to 13 points.

After Ugandan referee Ms Saudah Adiru kicked off, the Stallions opened the scoring in the 11th minute with a try from No.8 Ali Papi Traore. But the conversion was missed. In the 16th minute, Burkina Faso were awarded a penalty courtesy of No.12 Adama Démé. This was followed   with a penalty in the 25th minute by Cameroon's No.10, Noël Touko.

Half-time came with a lead from the organizing country by a close score of 5 to 3. In the 3rd minute of the second half, Ousmane Tioro of the Stallions (No. 15) managed to score a try. The Burkinabè team stood out as a very offensive team in this competition. The Stallions scored other tries (such as in the 20’20 by Cheick Abass Sawadogo). In the 30th minute, Cameroon got a penalty. During this decisive match, Cameroon accumulated two yellow cards for No.8 Moctar Hassan (20'55) and Moïse Chimi (No.14) in the 18th minute of the 2nd half.

Burkina Faso triumphed over Cameroon by a score of 17-13 in front of a more electrified and larger crowd of supporters than in previous matches. “I think the victory is deserved and I wish the Burkina Faso team good luck for the future,” said tournament director Mostafa Jelti. The victory seemed to surprise many sports observers given the lead the Cameroonian fifteens had taken in this tournament.

“Playing abroad is not easy. We gave it our all and it didn't work out. It’s sport. We learned from our mistakes, “Indomitable Lions captain Justin Amougou said with fair play. According to Burkina Faso coach Cheikh Amidou Ouédraogo, morale, the youth of the players, aggressiveness in defence, speed in attacks and discipline were Burkina Faso's strengths in securing the victory.

This Rugby Africa Cup Repechage was hosted by the Burkinabè Rugby Federation (FBR). According to its president, Mrs Rolande Boro, the organization has been successful despite the COVID-19 pandemic. She mentioned that the organizational difficulties are mainly linked to poor infrastructure.

Cameroon's resounding return to African and World Rugby bodies was not ultimately a success. The “country of upright men” will thus join the 12th place in Pool D of the Rugby Africa Cup which is scheduled to be held in Tunisia from July 9 to 17. This round will be played out with Zimbabwe and Tunisia.

Nigeria
Police rescue remaining 4 abducted pupils in Nasarawa State
1 day ago
The Police Command in Nasarawa State has confirmed the rescue of the remaining four abducted pupils of Local Government Education Authority (LGEA) Primary School Alwaza, Doma Local Government Area.
Technology
Buhari explains reappointment of Kashifu Inuwa as NITDA Director General
1 day ago
President Muhammadu Buhari said he reappointed Kashifu Inuwa Abdullahi as Director General of the National Information Technology Development Agency, NITDA, due to the agency's remarkable successes. Buhari made the disclosure in his address at the launch of the National Policy on the Nigerian Government Second-Level Domains and National Data Strategy in State House, Abuja. The…
Nigeria
Insecurity: Imo Police commence manhunt for killers of Customary Court Chair
1 day ago
The Imo Police Command has confirmed Thursday’s killing of a Customary Court Judge, Mr Nnaemeka Ugboma, while presiding over a matter.
What's New
Mo Abudu, Betty Irabor, Funmi Iyanda, Others To Speak At Women Empowerment Conference in Lagos
1 day ago
Prominent Nigerian professionals, including CEO of Ebonylife Media, Mo Abudu, publisher and author, Betty Irabor and TV personality, Funmi Iyanda, are to attend and speak at the 2023 Linda Ikeji’s Self-made Woman Conference (SMWC) which is holding on Saturday, February 4 in Laos, in partnership with The
Nigeria
Protest rocks Ibadan over naira scarcity
1 day ago
Scores of customers of banks, on Friday, took to major streets in Ibadan, the Oyo State capital, to protest the scarcity of new naira notes, which has been a subject of discussion across major towns and cities in Nigeria.

Nigeria
Police rescue remaining 4 abducted pupils in Nasarawa State
1 day ago
The Police Command in Nasarawa State has confirmed the rescue of the remaining four abducted pupils of Local Government Education Authority (LGEA) Primary School Alwaza, Doma Local Government Area.
APO Press Releases
South Africa: Minister Patricia de Lille on process to build additional power lines
1 day ago
Download logoAs the Minister of the Department of Public Works and Infrastructure (DPWI), I was requested by Eskom to expropriate servitudes, in terms of existing legislation, for electricity transmission lines on its behalf to allow the entity to supply more power to areas in Limpopo than what is currently possible. All the affected owners were…