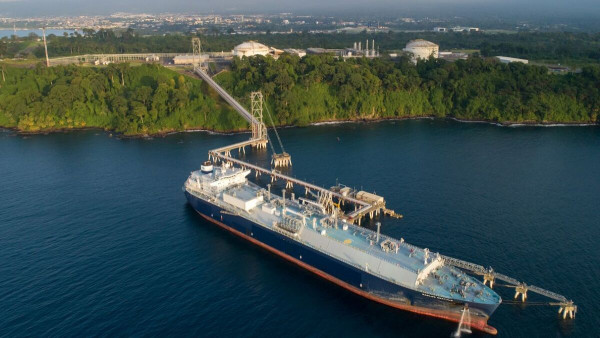 In the face of a global pandemic, Equatorial Guinea has been uniquely able to advance a large-scale gas megaproject and make substantive improvements to its foreign relations and domestic regulatory framework. Now, the country is prioritizing economic diversification via industrialization and downstream industry to drive a post-COVID-19 recovery.

For the past eighteen months, Equatorial Guinea has been weathering a storm. With the onset of Coronavirus and subsequent drop in crude oil prices, sub-Saharan Africa’s small but mighty oil producer was hit with dual economic shocks that exacerbated existing negative growth. In August 2020, the government and prime minister of Equatorial Guinea tendered their resignations due to the inability to achieve economic stability in the wake of the pandemic, then were reappointed by H.E. President Teodoro Obiang Nguema Mbasogo four days later. Then, as the pandemic began to turn a corner with the rollout of vaccines, a series of explosions occurred at a military barracks in Bata in March, injuring more than 700 people and causing extensive damage to residential areas.

Yet among the chaos, the Central African nation has emerged stronger, more resilient and more responsive to the needs of its people than before. As businesses faced closures and personnel layoffs, the government implemented a new decree amending tax regulations to support small- and medium-sized enterprises.

As the oil and gas industry halted capital expenditures, Equatorial Guinea moved forward with the construction of its flagship gas megaproject, in partnership with foreign operators. And as the world became increasingly divided amidst border closures and the discovery of new variants of COVID-19, government officials from Equatorial Guinea forged closer diplomatic relations with both African and non-African allies.

In seeking to sustain engagement with global investors, Energy Capital & Power (ECP) – the continent’s premier investment platform – has been outspoken about Equatorial Guinea’s ongoing opportunities for foreign investors, organizing a webinar last April to address the impact of COVID-19 and delineate mitigation measures. In April, ECP, in partnership with the Ministry of Mines and Hydrocarbons, announced the launch of its Africa Energy Series (AES): Equatorial Guinea 2021 campaign – comprising a report and documentary – that will serve as a critical tool to navigate the energy investment landscape of one of Africa’s more mature petroleum-producing markets.

COVID-19 and the National Economy

On a global scale, Equatorial Guinea has experienced a relatively low number of Coronavirus cases and has been diligent about quarantine and social distancing measures to protect its population. With the first case reported on March 14, 2020, the virus was slow to spread, until peaking in mid-July and declining to a rate of roughly 50 new cases per day as of June 2021, with vaccines administered free-of-charge at La Paz, Malabo Regional Hospital and all Community Medical Centers. In addition to mobilizing economic and material resources by Presidential Decree to curb the spread of the virus in its own country – as well as defining minimum allocations for public health and safety in the state budget – Equatorial Guinea donated $2 million dollars to China as an act of solidarity in its fight against COVID-19.

As with most African countries with small, dispersed populations and low infection rates, the ramifications of COVID-19 for Equatorial Guinea have been largely economic, as the country derives about three-quarters of its state revenue from oil exports. The drop in global oil demand – coupled with a decline in household consumption and slowdown in business activities due to lockdowns, border closures and other measures designed to contain the spread of the virus – led real GDP to decline by 6.1% in 2020 and investment to shrink by 35%. That said, the economy is expected to grow by 2.6% in 2021 owing to the successful completion of the Alen Gas Monetization project and projected recovery of the global economy by the second half of the year, accompanied by a surge in oil demand. To initiate a post-COVID-19 recovery, Equatorial Guinea is continuing its diversification drive that targets industrialization and the creation of value-added industries, transforming crude resources into downstream industries such as refining, chemical manufacturing, construction and related services. Its ongoing Year of Investment initiative features several capital-intensive projects that are open to investors and represent a combined one billion dollars in foreign direct investment.

Building on the foundation laid by the Year of Energy campaign in 2019, Equatorial Guinea has become an emergent actor on the global energy stage, and only advanced its position as a regional leader in the past year. Between February 2020 and May 2021, cooperation agreements were established with Cameroon, Nigeria, São Tomé and Príncipe and the Republic of Congo regarding hydrocarbon exploration, energy cooperation, cross-border security and regional gas trade. At a time when the region faces collective economic uncertainty, heightened regional integration among Central African Economic and Monetary Community states has been prioritized as a means of recovery. Outside of the continent, Equatorial Guinea signed a Memorandum of Understanding with Qatar in May regarding cooperation in the fields of investment, economy, energy, transportation and agriculture; forged several agreements with Russian state-owned exploration companies following the Russia-Africa Summit in 2019; and strengthened existing relations with China via the supply of Chinese vaccines to Equatorial Guinea, as the two countries celebrate 50 years of diplomatic relations. H.E. President Mbasogo has been vocal about his commitment to upholding multilateralism and nonalignment, with a view toward creating mutually beneficial trade and economic ties with partners from both the East and the West.