From Reactive to Proactive: How MSF in Beira is Stepping Up its Disaster Response Preparations 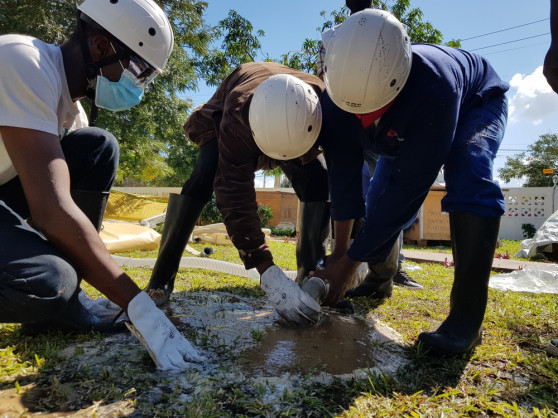 Natural disasters, such as floods, cyclones, drought and earthquakes, have had a significant impact on Mozambique’s people. Cyclone Idai made landfall in the eastern city of Beira, the capital of Sofala province, on 14 March 2019. Within days it had reduced 80 per cent of the city to ruins and left over 600 people dead and more than 1,600 injured.

Mozambique is among the most disaster-prone countries in the world. Natural disasters, such as floods, cyclones, drought and earthquakes, have had a significant impact on Mozambique’s people. Cyclone Idai made landfall in the eastern city of Beira, the capital of Sofala province, on 14 March 2019. Within days it had reduced 80 per cent of the city to ruins and left over 600 people dead and more than 1,600 injured. A little over a year later, Beira was pummelled again by two strong tropical storms, Chalane and Eloise.

MSF’s primary focus in Beira continues to be working with key communities and providing treatment for patients with advanced HIV. However, recognizing the need for better disaster response plans, the project has taken a proactive approach in preparing its team and local organisations ahead of the rainy season.

“It’s quite clear that Beira is a place where emergencies happen,” says Sacha Mendozza, MSF logistics manager in Beira, who spearheaded the idea of emergency preparedness training for the team based there. “I realized the need for capacity building because we are constantly facing or reacting to big emergencies. We want the team to feel prepared when they have to respond to emergencies. The idea is to create a small emergency pool within our project that can react during the first 48 to 72 hours of an emergency, as those are the most critical to save lives, and then create the structure to receive additional support.

Responding to an emergency involves the whole project, not only water and sanitation, logistics and medical teams, but the finance and supply departments as well. We started with the theory: why, who, how, when – defining scenarios, alert systems, preparedness and response processes. Then we moved on to practical scenarios”.

In just one week, the MSF office in Beira was turned into a mock cholera treatment centre, had water jetting holes and a water treatment unit installed in its garden. Metu Nyamadzawo works as MSF’s environmental health technical activity supervisor in the Regional Environment and Health Project in Zimbabwe. He travelled to Beira to give the training. He explains why learning water jetting techniques (which means looking for water by creating deep holes with high-pressure water jets) are essential in an emergency:

“This is very important because immediately after a disaster we are in a precarious situation, without access to available sources of water. So before the main response starts, we can rush to the emergency area with this equipment, which is low cost and only needs human labour, and quickly extract water for people to use in the initial stages of the emergency situation, without the need for a lot of import resources and technical equipment. We can just extract water from underground aquifers.”

As the climate continues to change and natural disasters increase in both frequency and intensity all over the world, Mozambique, and Sofala province in particular, is especially at risk from the cyclones and tropical storms that periodically affect the region.

“There are a lot of different humanitarian and emergency response actors in Beira, it’s a sort of legacy from Idai, and we invited all of them to participate in the training. We aim to reinforce the connection with the actors to implement a ‘pre-agreement’ with them to be faster in terms of response. For example, if there is a partner organisation that is strong in terms of water, sanitation and hygiene, and we know MSF is strong in medical support, then if there is an emergency, we already have agreed plans in place with them and we can be more efficient in our response. While we can’t predict when the next disaster will strike, we can ensure we are prepared for it”, concludes Sacha Mendozza.