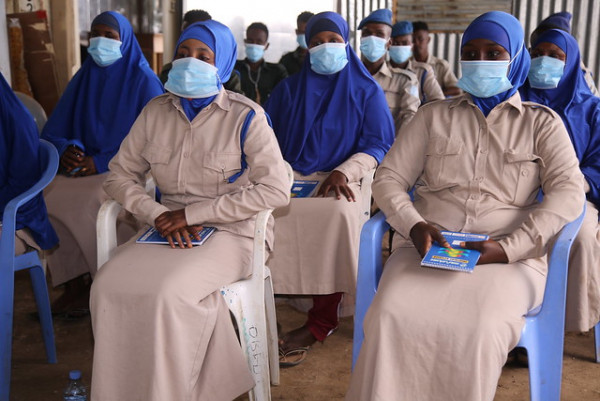 Fifty-six officers of the HirShabelle State Police have undergone a five-day training on Public order management.

The trainees were drawn from various police stations in Jowhar and included 15 women officers. Jointly organised with the HirShabelle State Ministry of Internal Security and the African Union Mission in Somalia (AMISOM) Police component, the training focused on crowd control, managing riots and demonstrations.

AMISOM Police’s operational support to the Somalia Police Force (SPF) includes advising, mentoring and training to help the SFP build the capacity to manage the country’s law and order and discharging its duties to internationally accepted standards.

“This was a significant course for the SPF personnel and an important to maintenaning law and order during elections,” said Eliud Mutama, AMISOM police coordinator in HirShabelle

Mohamed Ahmed Kulmiye, the Security Coordinator in the Office of the President of HirShabelle State, said such trainings were important to improvemegeneral security situation in HirShabelle State.

“We hope the officers will perform their duties and advance the objectives of maintaining law and order in all districts in HirShabelle state,” said Kulmiye.

“The knowledge we gained from the training will enable uscooperate with the public to ensure safety and security and law and order during and after the elections,” said Dhuhulow.