By APO Group
Share on Facebook Share on Twitter Share on WhatsApp Share on Telegram
Twenty- two teams took to the field, but it was the Irish men’s team and French and Russian women’s’ teams that secured the winning tickets to Tokyo, following the three-day 2021 World Rugby Sevens Repechage that took place this weekend at the Stade Louis II in Monaco. The Olympic repechage is the final part of… 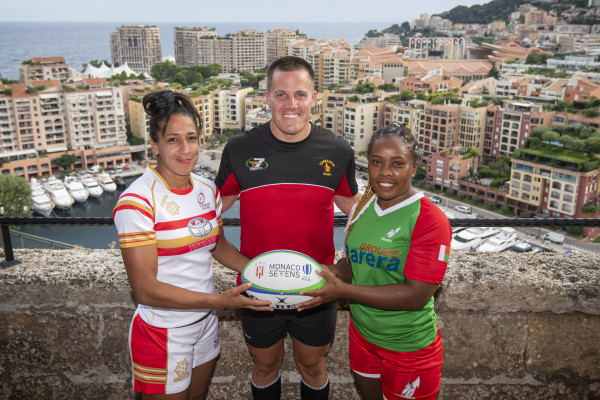 Twenty- two teams took to the field, but it was the Irish men’s team and French and Russian women’s’ teams that secured the winning tickets to Tokyo, following the three-day 2021 World Rugby Sevens Repechage that took place this weekend at the Stade Louis II in Monaco.

The Olympic repechage is the final part of the global qualifying process and features the best-placed eligible teams who missed out on automatic qualification via their respective regional qualification tournaments.

This weekend determined Russian and French women’s’ teams and Ireland men’s team will complete the line-up for the rugby sevens competition in Tokyo from 26-31 July, at the Tokyo Stadium.

With the action having kicked off on Friday, 18 June with Zimbabwe versing Mexico, this year also saw 5 000 fans join the festivities in the stadium for a packed programme of men’s and women’s matches on day two and three culminating in the two women’s finals between France and Hong Kong and Russia and Kazakhstan and the one men’s final between Ireland and France on Sunday evening.

Leading up to the finals, the women’s competition featured:

For the men’s competition, the 10 teams were drawn into two pools of five teams (https://bit.ly/3zKXxiV), including one team from each of the five pre-determined bands of seeds.

The top two teams from each pool progressed through to the knockout stages, culminating in the final between Ireland and France.

In the women’s competition 12 teams were drawn into three pools of four teams (https://bit.ly/2ST1DoK). The teams were banded based on placements in their regional competitions alongside performances in World Rugby tournaments. One team from each band of seeds was drawn into each pool.

The top two teams in each pool, plus the two third-placed teams with the highest point totals qualified for the knockout stages of the women’s competition.

As there were two Olympic qualification places available for women, the repechage featured two rounds of knockout games with the final round featuring four teams Russia, France, Hong Kong, and Kazakhstan competing in two matches where both winners Russia and France gained Olympic qualification.

Securing the 28-19 victory for Ireland, Jordan Conroy scored a pair of second half tries, while Harry McNulty added a fourth.

France’s women beat Hong Kong 51-0 to secure their win while Russia will make their Olympic debut in Japan next month after winning 38-0 against Kazakhstan.

Day three got underway with Samoa narrowly defeating Mexico 20-17. However, Samoa was knocked out by Russia in the knockout stage.

Victory set up a qualifier final against Kazakhstan, who had beaten Papua New Guinea 17-10 to top Pool B and then overcame Tunisia 29-21 in an absorbing semi-final.

Russia was too strong for Kazakhstan and ran in four tries before half-time through captain Alena Tyron, Anna Baranchuk, Marina Kukina and Nadezhda Sozonova. Elena Zdrokova added two tries after the break and put the seal on a 38-0 victory.

France won their first match on Sunday 55-0 against Hong Kong, with tries from Anne-Cécile Ciofani, Chloe Jacquet and Séraphine Okemba.

Victory confirmed France’s place as top seeds in the women’s repechage, and a qualifier semi-final against Colombia, who had held off Madagascar earlier in the day to win 12-7.

Hong Kong, who had beaten Argentina 24-5 in their qualifier semi-final were France’s opposition in their final. France started strongly and took less than a minute to open the scoring as captain Fanny Horta took a pass from Okembe to touch down.

It was a dominant performance from the French as Guerin and Ciofani both completed hat-tricks. Okembe, meanwhile, scored her ninth and 10th tries of the tournament in the second period to ensure France qualified for Tokyo 2020 with a 49-0 win.

Day three of the men’s repechage got underway with a win for Zimbabwe, who recovered from 12-0 down to beat Tonga 26-17 in Pool A.

HSBC World Rugby Sevens Series (www.World.rugby/sevens-series) core teams Ireland and Samoa were already assured of progress to the qualifier semi-finals, but it was the Irish who did so as Pool A winners. Terry Kennedy produced an audacious behind-the-back pass to set up Jordan Conroy for Ireland’s second try in their 21-7 win.

Ireland’s points difference ensured they headed into the semi-finals as top seeds, and the side proved too strong for Hong Kong, winning 28-5.

France were Ireland’s opponents in the finale match. The World Series core team had enjoyed progress to the final, beating Hong Kong 36-5 and following that up with an impressive 31-0 win against Samoa in the semi-finals.

Within the opening minute Ireland led the scoreboard. France recovered to lead 12-7 at half-time, with tries from Stephen Parez and Paulin Riva, but they were stopped during the second half with a late score from Terry Bouhraoua pushing Ireland to a 28-19 victory.

World
Macron's top adviser charged with conflict of interest
50 mins ago
The top official in French President Emmanuel Macron's office has been charged with a conflict of interest while in office, the chief financial crimes prosecutor said Monday.
Sport
As he plots Liverpool revival, Klopp says even Ronaldo has confidence dips
56 mins ago
Liverpool manager Jurgen Klopp says even Cristiano Ronaldo and Lionel Messi are not immune from confidence issues as he seeks to find a solution to his side's frustrating inconsistency
Nigeria
NSCDC arrests 2 over adulterated petroleum product in Anambra
1 hour ago
The Nigeria Security and Civil Defense Corps (NSCDC) has arrested two suspects conveying 50, 000 litres of suspected adulterated Automotive Gas Oil (AGO) in Anambra.
Nigeria
London conference urges Nigeria to upscale investment in education
1 hour ago
A London conference on Monday told the Nigerian government to upscale its investment in education to pull the West African country out of endemic poverty.
Nigeria
Nigeria needs leaders with capacity, character to manage change – Gbajabiamila
1 hour ago
The Speaker of the House of Representatives, Rep. Femi Gbajabiamila, says Nigeria needs leaders with capacity to manage rapid domestic and global changes to achieve prosperity, peace, and security

Sport
As he plots Liverpool revival, Klopp says even Ronaldo has confidence dips
56 mins ago
Liverpool manager Jurgen Klopp says even Cristiano Ronaldo and Lionel Messi are not immune from confidence issues as he seeks to find a solution to his side's frustrating inconsistency