By APO Group
Share on Facebook Share on Twitter Share on WhatsApp Share on Telegram
The leadership of South Africa based infrastructure development firm Khato Civils (www.KhatoCivils.com) has announced an ambitious programme to mentor a new generation of African firms. After already working on major infrastructure projects in South Africa, Malawi and Botswana, Khato Civils intends to expand into markets such as Zambia, Zimbabwe, Tanzania and Kenya while working with… 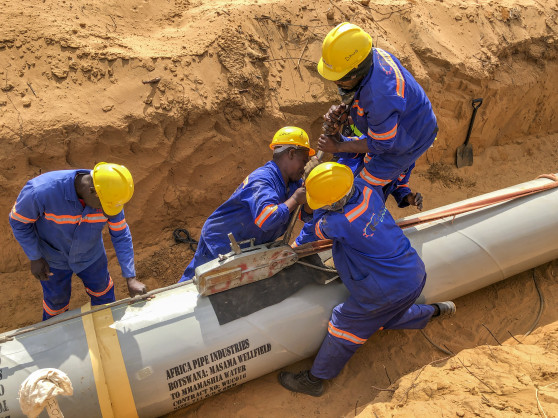 The leadership of South Africa based infrastructure development firm Khato Civils (www.KhatoCivils.com) has announced an ambitious programme to mentor a new generation of African firms.

As part of its continental growth plan, Khato Civils is making an unprecedented commitment to mentorship of local firms with 30% of the value of projects to be distributed to three partner firms in each market it enters. Khato Civil's long-term growth plan is to enter 42 African markets.

However, Khato Civils is also engaged in a communications campaign to raise awareness of the challenges faced by African entrepreneurs and professionals who seek to play a role in building the continent’s infrastructure.

With the majority of major infrastructure works going to multinational firms, and many markets lacking legislation that ensure local subcontracting & supplier opportunities, African entrepreneurs are being locked out of the development of their own nations.

Khato Civils is calling for change across the sector and for African firms to lead in Africa’s infrastructure rollout.

In a series of interviews with AfricaLive.net, CEO Mongezi Mnyani and Chairman Simbi Phiri announced the mentorship programme and called for Africa’s infrastructure development to be led by African firms, highlighting that:

*Only 16% of Construction on Africa’s Infrastructure (https://bit.ly/3laIOsn) build is carried out by local firms.

*According to Deloitte (https://bit.ly/3uOLz64), Chinese contractors alone constructed an estimated 30 per cent of all major projects in Africa in 2020.

*International financiers will often insist on work going to European or Asian firms, overlooking that African firms have the capabilities to deliver and the understanding of how to work with local communities.

*Projects that fail to create local employment and subcontracting & supplier opportunities are at risk of protests, disruption and sabotage from excluded communities.

Khato Civils CEO Mongezi Mnyani recently worked with AfricaLive to highlight the threat to African economies that the lack of involvement from locally owned firms creates. Mr Mnyani is working to make sure financiers hear the message: engaging with local firms and communities is not only the right thing to do – it makes economic sense.

In the case of the Khato Civils 100km pipeline project in Botswana, recruiting workers and engaging with local leadership along the route of the pipeline resulted in the project being delivered ahead of schedule and under budget (https://bit.ly/3laSRhh). Botswana’s Water Utilities Corporation credited working with Khato Civils as saving them 1.2bn Pula (over USD 100m) as compared to similar large scale water projects.

Mr Mnyani explained “You can’t just undermine what local companies can do. If you show up in these communities biased and not willing to engage, you will fail.

“In Mozambique, for example, we have seen cases of project failure because multinationals had little respect for the locals. It can directly lead to protests, strikes or sabotage of projects.

“You should always have a mindset of working with the locals to avoid animosity. If we are serious about the health of the economy, we must accompany aid with capacity development.

“The mindset of feeling superior to the locals needs to go if projects are to work properly across the continent.

“In Botswana, our approach was to reduce cases of conflict as much as we could. Our recruitment system had to change and become more inclusive.

“We ensured that we had workers from each village where the pipeline was crossing through.

“Consultation with local leadership could mean talking to traditional leaders, councillors, members of national assemblies and community leaders. Consultation can be very complex and time-consuming, but it is all worth it to eliminate any problems along the way. This is our process everywhere we go and we don’t intend to change it.”

The UK based NGO Engineers Against Poverty (http://EngineersAgainstPoverty.org/) are also working to highlight the risk to African development that overlooking local firms creates, and have stated that “Reliance on foreign enterprises to design and construct facilities often means they are not sustainable as the expertise may no longer be available once the construction is complete.”

In order to address these risks to African infrastructure, Khato Civils has now committed to an ambitious mentorship programme for local firms. 30% of the value of projects will be distributed to three partner firms in each market Khato Civils enters.

Announcing the plan, Chairman Simbi Phiri said “We plan to expand into 42 African countries and give 30 per cent of each project to local companies.

“We plan to allocate resources to a few local companies in each of those countries to expose them properly. They will come in and see how we work and how we prepare. They will learn from us how to run finance, management and to adapt our model. If we start training three small local companies, at least two should succeed. We made the mistake of allocating 30 per cent of the contract value of the 100km pipeline project to train one local company in Botswana, however, that was managed poorly.

“In future, we will allocate that 30 per cent to three different local companies with each getting 10 per cent. Learning from such experiences is how we can ensure we have a positive impact as we grow.”

Expanding on issues facing Africa’s entrepreneurs, Mr Phiri told the story of his own entrepreneurial journey on AfricaLive.net (https://bit.ly/3uGZfzI) and spoke of his desire to help ambitious Africans from across all sectors, saying “I want to make one thing clear to young entrepreneurs reading this; banks are not the only source of funding.

“Mentors can provide knowledge and access to finance which is invaluable in African business.”

On AfricaLive: A Deep Dive Into The Five Threats to African Development (https://bit.ly/3uIvVcr)

Distributed by APO Group on behalf of Khato Civils.

Nigeria
COVID-19: NCDC reports 165 new infections in Nigeria, total 210,460
10 mins ago
The Nigeria Centre for Disease Control (NCDC) has reported 165 new infections and 26 additional deaths from the coronavirus pandemic on Sunday.
World
Colombia prepares to extradite drug lord 'Otoniel' to US
21 mins ago
Colombia's government announced Sunday it is working towards extraditing the country's most-wanted drug trafficker "Otoniel" to the United States, a day after he was captured in a major operation in the jungle.
World
3 dead, 3 missing after avalanche on Ecuador volcano
39 mins ago
An avalanche Sunday on a snow-capped Ecuadoran volcano, the highest peak in the country, killed at least three climbers and left three others missing, officials reported. The avalanche struck a group of 16 mountaineers while at an altitude of 6,100 meters (20,000 feet) on the dormant Chimborazo volcano, according to responders. "There are three missing…
Nigeria
NUC picks 6 varsities for standards enhancement programme
45 mins ago
The National Universities Commission (NUC) has picked six federal universities for the Sustainable Procurement, Environmental and Social Standards Enhancement (SPESSE) Project.
World
Turkey lira slumps to record low after Erdogan orders expulsions
53 mins ago
The Turkish lira dropped to record lows on Monday after Turkish President Recep Tayyip Erdogan at the weekend ordered the expulsion of the ambassadors of 10 countries, including Germany and the United States.