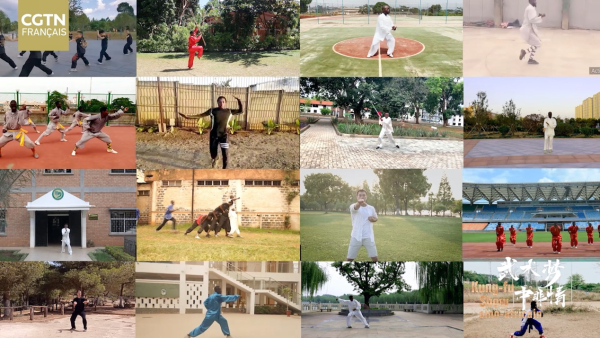 On October 12, 13, 15, and 16, at 3 pm Beijing time (GMT 07:00), “Sino-African Kung Fu Show” will enter the world's No.1 temple, Shaolin temple and Chenjiagou, the birthplace of Chen-style Taijiquan, and launch live broadcasts simultaneously on multiple platforms in China and abroad.

The four new media live broadcasts will feature Zhao Zhijin, host of CGTN French, He Xiaobo, host of Wushu World Channel of Henan radio and television station, and Liang Zi, a photographer who loves Africa, as well as more mysterious guests. In the live broadcast room, together with the domestic and international audience, you will enjoy the wonderful video performances of Chinese and African martial arts enthusiasts.

In Shaolin Temple, we will witness the martial arts performance of the monks of Shaolin Kung Fu group, visit the 48 Kung Fu foot depressions and the precious colorful murals of the Thousand Buddha Hall. The guests and masters will experience the Shaolin culture of “meditation and Kung Fu training” together. In Chenjiagou, the birthplace of Chen-style Taijiquan, we will explore the mystery of Chen-style Taijiquan, experience the pushing hand movement to defeat the enemy and feel the Eastern philosophy contained in the intangible cultural heritage of the world of Taijiquan, with the assistance and the dissemination of the Heritage and development of intangible cultural heritage program.

At the same time, by participating in the live interaction, netizens will have the opportunity to receive exquisite gifts of the ” Sino-African Kung Fu Show “. The program will be broadcast live on CGTN French, CMG Mobile, Kuaishou, Weibo, Facebook, Twitter, Youtube and other new media platforms, so stay tuned.

Distributed by APO Group on behalf of CGTN.

Gadgets
itel S17: A selfie smartphone with unbeatable features for users
1 day ago
From meeting lifestyle needs to blazing new trails, itel is continuously proving its dominance in the smartphone industry. The global smartphone and accessories brand has been in the news in recent weeks for yet again delivering on its promise to tailor its products to meet the everyday needs of users, laced with superior technology,…
Gadgets
Big battery, big screen, beautiful design? itel S17 has it all
1 day ago
itel S17 Has It All! Big Battery, Beautiful Design, Amazing Features Just For You There are smartphones, and then there is the itel S17, a smartphone that has the three B’s consumers look out for. The itel S17 has a big battery, big screen, beautiful design, and other amazing features selfie smartphone lovers would fall…
Sport
Sane strikes as spotless Bayern sink Benfica
1 day ago
Leroy Sane struck twice in the second half to inspire Bayern Munich to a 4-0 win at Benfica on Wednesday, as the German giants maintained their perfect record in the Champions League group stage this season.
Sport
Barca edge past Dynamo to revive Champions League hopes at half-empty Camp Nou
1 day ago
Gerard Pique sparked Barcelona's flailing Champions League campaign into life on Wednesday by scoring the only goal in a 1-0 win over Dynamo Kiev, a victory that was witnessed by a half-empty Camp Nou.
World
Taliban vows to work with Russia, regional players over IS threats
1 day ago
The Taliban agreed Wednesday to work with Russia, China and Iran on regional security after the Kremlin warned of emerging Islamic State and drug-trafficking threats in the wake of the hardline group's takeover in Afghanistan.

APO Press Releases
WFP supports the Ghana School Feeding Programme to digitize its monitoring system
15 mins ago
Download logoThe United Nations World Food Programme (WFP) has provided the Ghana School Feeding Programme (GSFP) with tablets to digitize the monitoring of the school feeding programme. The initiative aims to reinforce programme efficiency and implementation by enabling real-time tracking of daily attendance and feeding in 260 pilot schools in all 16 regions of the…

APO Press Releases
WFP and Chellaram Foundation partner to support school-aged children in Sao Tome and Principe
15 mins ago
The United Nations World Food Programme (WFP) is increasing support to 25,000 school-aged children enrolled in the National School Feeding and Health Programme (PNASE) in Sao Tome and Principe thanks to a USD700,000 contribution from the Chellaram Foundation. The operation which begun a week after the Government had declared a nation-wide State of Calamity aims…