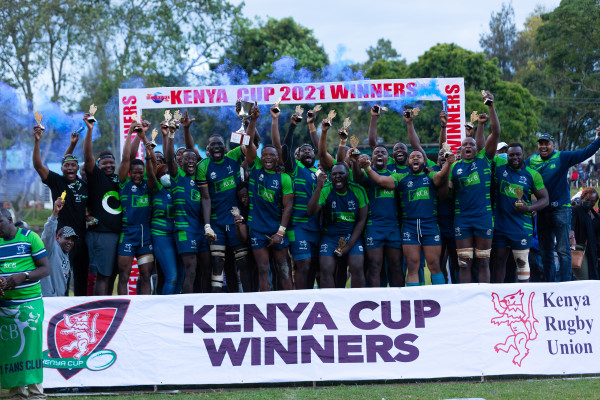 Trailing 20-0 at half time, KCB recovered to win their eighth Kenya Cup title with a 28-25 win over Kabras Sugar in an entertaining final at the Nandi Bears Club in Nandi Hills on Saturday 4 September 2021.

It was Kabras who dominated an incident-filled first half, racing to a 6-0 lead through a brace of penalties from Ntubeni Dukisa.

The South African fly half would then convert Jone Kubu’s two tries in a half that saw KCB lose Isaac Njoroge, collectively to a yellow card and injury as well as Rocky Aguko to a leg injury.

KCB would respond with a try after the break, Jacob Ojee touching down to make it 20-5 before Darwin Mukidza drilled home a penalty to make it 20-8.

KCB began their fight back slowly, Mukidza with a penalty to make it 25-11 after 68 minutes before Amonde, backed from the bin, barged over, Mukidza sure with the extras to make it 25-18.

Mukidza would visit the bin, KCB again down to 14 men but holding forte. They would level the scores through Vincent Onyala’s last gasp try with a returning Mukidza converting to tie the game 25-25 at full time, sending this game into sudden death extra time.

The tension spilled over into the make or break phase of this encounter, Dukisa missing a penalty for Kabras before Mukidza drilled over the decisive kick, KCB claiming their fourth title in a row and eighth overall since their first win in 2005.

An epic game of rugby it was!