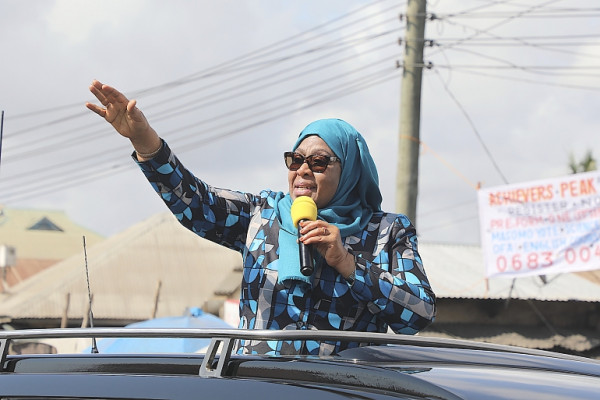 President Samia Suluhu Hassan has said the Government will continue to put different charges for the sake of avoiding securing loans attached with tougher strings. The Head of State said the country's determination to enhance social service delivery will easily be attained through the joint efforts between government and the public in general, apparently underlining the need for financial independence.

President Samia made the remarks yesterday, while addressing residents of Tegeta in Kawe constituency, as she was on the way to Bagamoyo, Coast Region to record a 'Royal Tour' documentary that will expose Tanzania before the world tourism markets with a target to attract more tourists and investments. She said, after introducing the mobile money transactions levies, the government heard public outcry on the charges as a result it decided to slash the rates by 30 percent.

In total, the Government has so far managed to collect 63bn/- from the levies that came to effect on July 15, this year, with the money channeled to construct 220 health centres and 560 classrooms. “The money is meant to improve social services, including Education and Health sectors for which, we are going to construct health facilities in the areas that had no access to such facilities,” she said.

She said the collection to be raised in September and October will be channeled towards the construction of over 500 classrooms countrywide, in a move to enable the government to accommodate all new students to be enrolled in 2022. She said a portion of the money will also be spent on constructing new primary and secondary schools in the Wazo area, as requested by the Member of Parliament for Kawe constituency, Bishop Josephat Gwajima.

Looking to accommodate all new Form One students and Class One pupils to be enrolled during the next academic year, the government is constructing more classrooms across the country. It is projecting to enrol 944,855 Form One students, up from 422,403, who were registered in 2016, when the government started to implement a fee free education policy.

This is an increase of 522,452 students, making a shortage of 10,447 classrooms that the government is working day and night to ensure the infrastructures are built on time. “Previously, we used to implement our strategies depending on donors but now, instead of aid, we do business and divide the profit… Profits we get and the taxes we collect, we use for people's development,” President Samia said.

She stressed the government's determination to execute all strategic development projects using profits gained from international trade and income generated from various local sources. President Samia implored Tanzanians to continue supporting the government on its development endeavour, saying the infrastructures being built out of the mobile money levies are for the better interest of the present and future generations. President Samia insisted that the government will continue to execute all the projects for the country to attain development plans and improve welfare of all Tanzanians.

“We are working hard to ensure all the ongoing development projects initiated by the former president the late John Magufuli, as well as coming up with new ones that will hasten service delivery in the country,” she explained.