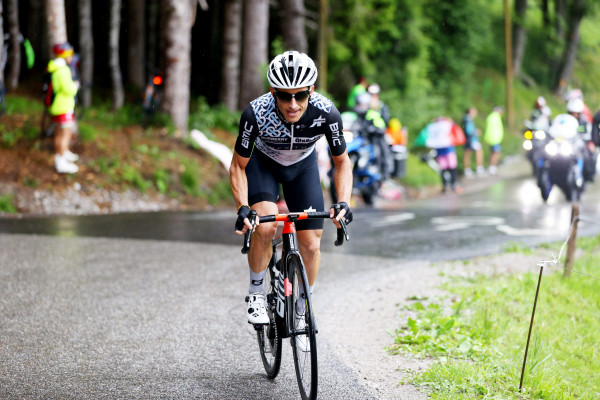 Dylan Teuns made it back-to-back wins at the Tour de France for Bahrain-Victorious as he soloed to victory on today’s 8th stage, the first mountain stage of the race. Tadej Pogacar (UAE Team Emirates) rode into the overall lead of the race, leaving behind the other GC contenders in commanding fashion.

Stage 8 of the Tour de France was the first mountain stage of the race, with 5 cetogorised climbs packed into just 150km between Oyonnax and Le-Grand Bornand. An uphill start and consistent rain throughout the stage also added to drama that soon followed.

Once again it was big battle to make the breakaway which only went clear after 70km of racing. Sergio Henao was very attentive during all the early attacks and managed to pick the right moment when 18 riders eventually went clear.

The peloton was greatly reduced by the time the break did go clear, with more than half the peloton resigned to ride in the grupetto from half way to the finish.

Henao’s lead group was able to build up a 6-minute lead before the first of three category 1 climbs. The race then exploded as the climbing began, both upfront and from what was left of the peloton, as Pogacar put in a big attack on the Col de Romme.

Henao fought bravely to stay with the best but it was Teuns who was the strongest out of the breakaway riders today, just summiting the final climb ahead of a charging Pogacar. Henao was caught be Richard Carapaz (Ineos Grenadiers) on the final descent to Le Grand Bornand, and by a select group of GC contenders in the final kilometer of the stage.

This saw our Colombian climber finish the stage in 19th place, but importantly, made a big leap up the overall classification to now sit in 11th place. For the grupetto, it was a tough race to make the time limit on such a difficult stage but all Team Qhubeka NextHash riders were able to do so.

Lars Michaelsen – Head Sports Director
We knew that this is his (Henao) terrain, in the Alps today and tomorrow before we head across to the Pyrenees.

Sergio was alert to the moves of the day and managed to be up there when it was important. We had racing from the start; the first 5km was uphill and he was already there and it just kept on coming and he was still there. So there’s big respect for the way that he’s racing; and of course the whole team strategy was to support him today which the team did for as long as they could.

We are looking at big differences in the GC and some people will go up and some down which we will have again tomorrow; perhaps he went too deep today but that we will only know tomorrow.

Sergio Henao
Today was a very hard stage, particularly after yesterday's incredibly long stage while today was the first stage in the Alps, and then it also rained for most of the day. For me at the beginning I was very focused for the breakaway but the start was very fast and it wasn't possible at first to get away but finally a group of 20 riders made it, which I was also in.

It was a very difficult stage to win with a group of super strong riders like that but I'm very happy to have good legs and to get close to that top 10 position in the GC. Mentally I feel good too and will focus on tomorrow as we have another very hard day, thankfully followed by the rest day.

Tokyo Olympic Games: Okagbare, Nwokocha advance to 100m semi-finals
1 hour ago  Sport
No going back on APC congresses, Buni vows despite court verdict
3 hours ago  Nigeria
Nigeria’s revenue to GDP is abysmal, says Akabueze
3 hours ago  Nigeria
Why there is persistent, acrimonous demand for restructuring, by Adele Jinadu
3 hours ago  Politics
Airlines fault revalidation of operating certificates every two years
3 hours ago  Business