By APO Group
Share on Facebook Share on Twitter Share on WhatsApp Share on Telegram
On Wednesday, 27 October 2021, eighteen domestic election observers completed a two-day training workshop in Mogadishu. The training was aimed at enhancing their capacity to observe elections for transparency and credibility. The workshop was organised by the Department of Peace, Security and Political Affairs of the African Union Commission, through the African Union Commission Electoral Assistance… 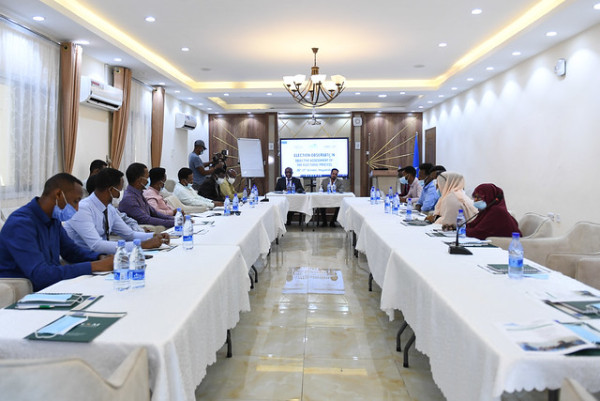 On Wednesday, 27 October 2021, eighteen domestic election observers completed a two-day training workshop in Mogadishu. The training was aimed at enhancing their capacity to observe elections for transparency and credibility. The workshop was organised by the Department of Peace, Security and Political Affairs of the African Union Commission, through the African Union Commission Electoral Assistance Mission to Somalia and the Political Affairs Unit of the African Union Mission in Somalia (AMISOM) in partnership with the Somalia Federal Electoral Implementation Team (FEIT).  The local observers, drawn from all the Federal Member States, would be observing the electoral processes of Somalia’s Lower and Upper Houses of Parliament. At the end of the process, the observers are expected to report objectively on the conduct of the elections.

Speaking at the opening ceremony, Deputy Special Representative of the Chairperson of the African Union Commission (DSRCC) for Somalia, Simon Mulongo, said the role of observers was important in supporting ongoing efforts towards democratisation, nation-building, peace and political stability in Somalia.

‘‘Whatever you do has an impact on the type of history we are trying to build and the standards we are trying to lay for democratic practice for this country. We really wish that you do your work diligently, accurately but more importantly, objectively and without bias”, he said.  The DSRCC also added ‘‘at the end of this, you will develop a report around which we can use to formulate further improvements on the future of the elections of the country”.

The workshop was part of wider electoral assistance to Somalia by the African Union Commission and AMISOM, which consists of financial, operational and technical support to FEIT. Col. Kennedy Okoro, a member of the African Union Electoral Assistance Mission to Somalia, deployed to provide continuous technical and advisory support to FEIT, said election observation by the civil society is an integral part of the electoral process, and that this assists to shape the credibility of future polls. “The report by the domestic election observers will reflect the inadequacies and areas of possible improvement. This will, in due course, ensure that the electoral process in Somalia is fine-tuned, to align with global best practices”, Col. Okoro said.

The Federal Electoral Implementation Team (FEIT) has already developed a code of conduct for election observers overseeing the Senate, House of the People as well as the Presidential elections of the Federal Republic of Somalia. “With the election of the Upper House now almost complete, and the elections of the Lower House commencing soon, we want to equip the observers with adequate knowledge to build their capacity to conduct their assessment objectively and deliver their responsibility in this election process,” said Ali Mohammed, the Head of Operations of the Federal Electoral Implementation Team (FEIT).

Hussein Barre, an election observer from Barawe and a former District Commissioner (DC) in South West State said he was enlightened and will work closely with all the stakeholders involved in the election. “We have gained a lot of skills and experiences during this training including our roles as observers, possible election irregularities and how we can collaborate with other institutions to ensure the process is fair, transparent and credible”, Barre said.

APO Press Releases
The United States government celebrates five years of improving youth and adolescent girls' education
45 mins ago
Download logoOn December 07, the United States Government, through the U.S. Agency for International Development (USAID), celebrated advancements to youth and girls’ education made through five years of the Waache Wasome (“Let Them Learn”) activity. The event celebrated and highlighted the successes and sustainability of the U.S. Government investments in the Waache Wasome youth activity…
APO Press Releases
Water and Sanitation on flooding in Western Cape catchments
45 mins ago
Download logoThe National Department of Water and Sanitation (DWS) wishes to provide an advisory regarding floods in some catchments in the Western Cape. As of Saturday, 4 December 2021, the South African Weather Service (SAWS) issued a revised Impact Based Warning for Severe Thunderstorms. On Sunday 05 December 2021 the Garden Route District Municipality experienced…

APO Press Releases
Presentation of five (5) draft texts of the ECOWAS Regional Competition Authority (ERCA) to the ECOWAS Parliament
45 mins ago
The draft legal texts for the operationalisation of the ECOWAS Regional Competition Authority were presented on Monday 6 December 2021, to the ECOWAS Parliament by a team from ERCA led by the Ag. Executive Director Dr Simeon Koffi and comprising Principal Programme Officer, Legal Affairs, Investigation, Compliance and Application of Law, Dr Yaouza Ouro-Sama. The…
APO Press Releases
Gambia: Ending impunity of past crimes must be part of human rights priorities for President Adama Barrow's second term
45 mins ago
Download logoIn reaction to the re-election of President Adama Barrow over the weekend in the first election since the departure of Yahya Jammeh, Michèle Eken, Amnesty International West Africa researcher said: “As he starts a second term in office, President Adama Barrow must tackle the huge challenge of ending impunity for human rights violations committed…

World
Omicron variant 'almost certainly' not more severe than Delta, Fauci says
1 day ago
Top US scientist Anthony Fauci said Tuesday early indications suggested the Covid-19 Omicron variant was not worse than prior strains, and was possibly milder while cautioning