The invisible crisis: WFP Chief appeals for the world not to look away as families starve in Madagascar 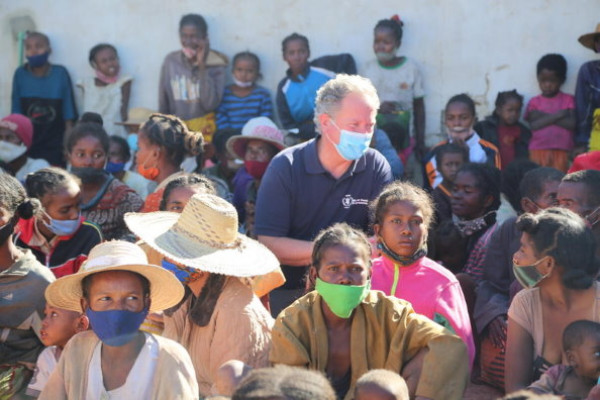 “I met women and children who were holding on for dear life, they’d walked for hours to get to our food distribution points. These were the ones who were healthy enough to make it,” said Beasley from a nutrition centre in the region.

“There have been back-to-back droughts in Madagascar which have pushed communities right to the very edge of starvation. Families are suffering and people are already dying from severe hunger. This is not because of war or conflict, this is because of climate change. This is an area of the world that has contributed nothing to climate change, but now, they’re the ones paying the highest price.’’

Southern Madagascar is experiencing its worst drought in four decades with more than 1.14 million people food insecure. Of those, an estimated 14,000 people are already in catastrophic conditions (IPC Phase 5) and this will double to 28,000 by October.

The gravity of the situation has forced thousands of people to leave their homes in search of food while those remaining have resorted to extreme coping measures for survival, like foraging for wild food. Due to the remote location of the communities and weak road infrastructure, few people have been able to access the area.

The Global Acute Malnutrition (GAM) in children under five in Madagascar has almost doubled over the last four months, reaching an alarming 16.5 percent. Amongst the worst affected is the district of Ambovombe where GAM rates of 27 percent indicate a life-threatening scenario for many children.

“This is enough to bring even the most hardened humanitarian to tears,” said Beasley. “Families have been living on raw red cactus fruits, wild leaves and locusts for months now. We can’t turn our backs on the people living here while the drought threatens thousands of innocent lives. Now is the time to stand up, act and keep supporting the Malagasy government to hold back the tide of climate change and save lives.’’

WFP has been working closely with the Malagasy government and other partners since late last year to address severe hunger. However, as the crisis deepens those efforts must be intensified. Last week Beasley met with the Prime Minister and senior officials to identify immediate and long-term solutions to this crisis.

WFP needs US$78.6 million dollars to provide lifesaving food in the next lean season in order to stop a preventable tragedy from unfolding before our eyes.