By APO Group
Share on Facebook Share on Twitter Share on WhatsApp Share on Telegram
Building capacities among local law enforcement remains a key priority for the United Nations Mission in South Sudan (UNMISS) as it continues to support the world’s youngest nation in its recovery from civil wars and COVID-19. Officers from the South Sudan Police Service are first responders to community security needs and work consistently to identify,… 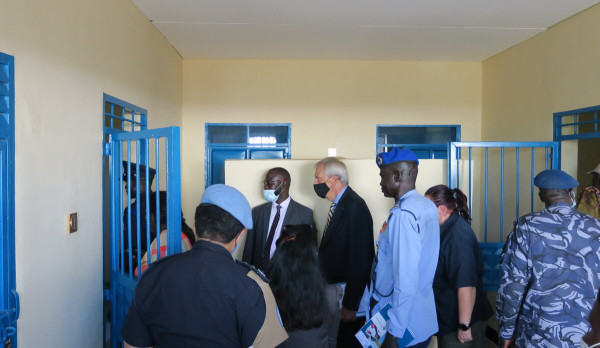 Building capacities among local law enforcement remains a key priority for the United Nations Mission in South Sudan (UNMISS) as it continues to support the world’s youngest nation in its recovery from civil wars and COVID-19.

Officers from the South Sudan Police Service are first responders to community security needs and work consistently to identify, respond and deter crimes, and catch lawbreakers.

However, to ensure that they can fully commit to and fulfil their duties, they require support from all partners

On 30 September 2021, this much-needed support came in the form of three Quick Impact Projects—constructions designed to improve facilities available to national police in Central Equatoria state—handed over by UNMISS.

There was much joy as Special Representative of the Secretary-General and Head of UNMISS, Nicholas Haysom, presented an eight-room building at the Yei Checkpoint in Juba, with male and female detention wings; a fully-refurbished police station in the Jebel area of Juba and a diagnostic centre at Buruk which will accommodate a laboratory, ultrasound and X-ray provisions as well as a pharmacy for South Sudanese police officers.

“All communities living in and around the Yei Checkpoint area, including the displaced, are extremely happy with this massive expansion in law and order facilities,” said James Wol, a community member. “This is essential to our everyday existence as we are working towards coexisting peacefully among ourselves and these facilities will greatly help our police officers in reducing criminality,” he added.

According to Mr. Wol, the new facility will also serve as a training ground for residents in community policing and skills development.

“We also request a legal representative to support vulnerable people before their cases are transferred to courts,” he added.

“Such support from the United Nations Police and UNMISS enables us to further bring police services closer to the people,” said Deputy Inspector General.

For SRSG Haysom, this was a special moment and he pledged the UN Peacekeeping mission’s commitment to do everything within its power and mandate to build peace from the ground up.

“We will attempt to do more to assist institutions and communities and reduce the level of challenges which face ordinary people in camps. We are proud to continue this work recognizing that the rule of law, justice and accountability are essential towards making the peace gains in South Sudan irreversible,” said the SRSG.

“We believe that these projects will improve accessibility to essential justices by vulnerable members of the community, especially women facing gender-based violence.”

The next phase of the projects, he added, will be designed to support national institutions working on security, justice and human rights as well as local authorities to discharge their functions especially ensuring the safe return of the displaced people.

In the last financial year, UNMISS supported in the establishment of 41 Quick Impact Projects, of which 11 of them were dedicated to support the South Sudan Police Service.

Mr Haysom praised sustained cooperation between UNPOL and the South Sudan National Police which has improved linkages between community members and law enforcement.

“Our reward and joy is to be involved in making the local police more professional and on a sound footing to effectively discharge their responsibilities to the people of South Sudan,” concluded the SRSG.

Nigeria
FG spends N4.5bn to feed 228,646 Gombe pupils in 5 yrs
NOW
The Federal Government has spent N4.5 billion to feed 228,646 pupils in Gombe State since the school feeding programme started in 2016.
Nigeria
eNaira is digital equivalent of physical currency - CBN Official
1 hour ago
Members of the public have been advised to embrace the newly introduced eNaira which is said to be the digital equivalent of Nigeria's physical currency. The e-Naira was said to be introduced not only to preserve the nation's currency, but also to make business transaction less cumbersome. The Director of Corporate Communications of the Central…
Sport
Barcelona closing in on Xavi as B team coach Barjuan put in temporary charge
1 hour ago
Barcelona is close to finalising Xavi Hernandez's long-anticipated return as coach, according to various reports in the Catalan press on Thursday, with B team coach Sergi Barjuan put in temporary charge following the sacking of Ronald Koeman.
Sport
Businessman who organised flight that killed footballer Emiliano Sala convicted
1 hour ago
The businessman who organised the 2019 flight that killed Argentine footballer Emiliano Sala was Thursday found guilty of endangering the safety of an aircraft.
Nigeria
Ajetunmobi couple granted citizenship after 'intense examination' - Antigua and Barbuda
1 hour ago
Antiguan authorities have confirmed that the Nigerian couples who are wanted for a multibillion Naira investment scam are citizens of the country. "Both Bamise Ajetunmobi and Elizabeth Ajetunmobi were granted citizenship in April 2021 having applied under the Citizenship by Investment Programme," Antigua and Barbuda's Citizenship by Investment Unit said in a statement. Nigerian couple…

APO Press Releases
B2Gold steadfast in its commitment to African investment and sustainability
5 hours ago
Download logo‘We provide jobs where there are limited opportunities for people and have mined safely throughout the world, helping communities and governments,’ explained Neil Reeder, Vice President of Government Relations for B2Gold. During the keynote address, Mr. Reeder outlined extensive community development, educational and environmental initiatives – including conservation and green mining – in Africa…